Other // Unrated // October 20, 2009
List Price: $14.98 [Buy now and save at Amazon]
Review by Stuart Galbraith IV | posted November 6, 2009 | E-mail the Author
A Christmas-themed episode of The Judy Garland Show, The Judy Garland Holiday Special, as it's being sold here (though the actual onscreen title is The Judy Garland Christmas Show), is one of the best Christmas variety shows ever, an alternately poingnant and bittersweet last hurrah for its troubled star, one of the century's great entertainers. The absolutely no-frills disc is clearly designed for those disinterested in the rest of Garland's problem-plagued but often outstanding short-lived show. 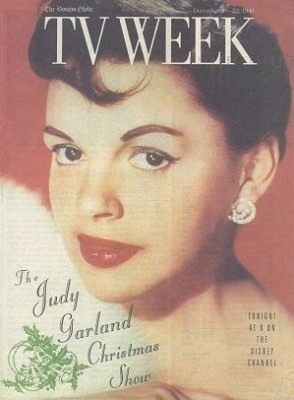 Though Christmas shows for television are often filmed months in advance, The Judy Garland Christmas Show was taped on December 6, 1963, just 16 days before it aired, and a genuine holiday spirit permeates the studio atmosphere. Deviating somewhat from the typical Judy Garland Show, this episode is set entirely at the Garland home, or at least a recreation on CBS Studio City's soundstage.

Judy invites the viewer inside for "an informal evening" with the kids: 11-year-old Lorna and eight-year-old Joey. There's no sign whatsoever of Sidney Luft, their father and Garland's husband at the time, and Judy explains her eldest, 17-year old Liza (from Garland's marriage to Vincente Minnelli), is "out skating with her beau," but she shows up after the first commercial break.

The 51:44 show is terrific; Garland famously entertained friends and family with marathon songfests, everyone gathered around the nearest piano, and this special does an excellent job capturing that spirit. The program is book-ended by authentically intimate cuddling between mom Judy and the two younger kids - she and Joey affectionately kiss one another throughout the show - as she sings "Have Yourself a Merry Little Christmas" (introduced by Garland in Meet Me in St. Louis), as all three sing "Consider Yourself" from Oliver! (later reprised with Liza) and Joey sings "Where is Love?" from that same musical. Unlike Liza, who even at 17 already shows much of her mother's same natural talent, Lorna and Joey here are more like regular kids, albeit kids obviously coached by one of the all-time great torch singers. Lorna runs out of breath trying to sing "Santa Claus is Coming to Town" with Joey, for instance, but their "amateur status" matters not; it's worth it just to catch Garland beaming with pride in the reaction shots.

As the evening progresses, Liza and that beau of hers, dancer Tracy Everitt, perform "Steam Heat" while Jack "The Love Boat" Jones pops by to perform a singularly jazzy rendition of "Wouldn't It Be Loverly?" and "Lollipops and Roses." Judy, Liza, and Jack perform a terrific medley of "Jingle Bells/Sleigh Ride/It Happened in Sun Valley," and later still Mel Tormé, a throng of Christmas carolers in tow (with all the extras the set by this time resembles a Beverly Hills ski lodge), performs with Judy "The Christmas Song," which Tormé himself wrote.

A crazy septet of dancing Santa Claus becomes a wild running gag - Lorna seems genuinely nonplussed by their antics - but eventually all the guests leave and Judy snuggles with the kids once more to sing "Over the Rainbow." (The Wizard of Oz aired on CBS every Christmas holiday from 1959 to 1962, but not in 1963.)

Unfortunately, the show was doomed almost from the beginning. It was foolishly scheduled opposite the phenomenally popular Western series Bonanza on NBC, and network types imposed some embarrassingly unfunny stand-up routines featuring comedian Jerry Van Dyke, who had recently scored big on brother Dick's popular sitcom. Despite this, Garland's performances and natural skills as a raconteur and ad-libber recaptured some of that Carnegie Hall magic, especially in the visually sophisticated shows supervised by Norman Jewison, and those featuring like-minded guest performers like Lena Horne, Ethel Merman, and a young Barbra Streisand. (Other guests were not so well chosen. I remember one show featuring the wonderful British character comedian Terry-Thomas, who awkwardly flop-sweats his way from one bad sketch to another.)

By the time Garland taped the Christmas program, she must have realized the show was in serious trouble. The years of physical and personal problems are etched in her prematurely aged features - she was only 41 at the time but looks a good 15 years older - and yet, oddly, this Christmas show is like a brief escape from all that. Despite a few obviously pre-recorded songs (with the larger chorus only) and the kids stumbling over some of their lines, the show maintains an impromptu air, the "informal evening" it was introduced as.

First released as part of The Judy Garland Collection way back in 1999, The Judy Garland Christmas Show seems identical to that presentation, video and audio-wise. The series was shot in black and white on one-inch videotape, yet despite the comparatively Stone-Age technology, the episode offers remarkably strong blacks and a sharp, undistorted image, and the tape source shows minimal wear. The audio, available in its original mono or a 5.1 remix, is likewise impressively vibrant, considering. The disc is closed-captioned.

Unlike the 1999 set, which was crammed with supplements for most every episode and even included a thick paperback book about the making of the series (I wish I hadn't sold mine), this disc is bare bones. Even the chapter stops disappoint: although the show has around 20 songs, the disc is limited to seven unilluminating chapter stops.

The Judy Garland Holiday Special/The Judy Garland Christmas Show is pretty much a must-have DVD for the holiday season, though Garland's entire single-season show is very much worthwhile, and fans might want to wait for a boxed set with all the shows packaged together. In the meantime, this is Recommended.