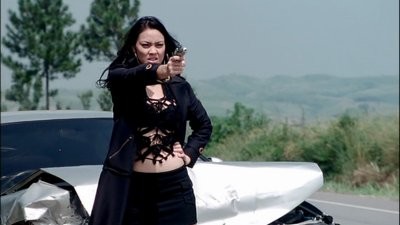 The 2006 Thai movie Chai Lai Angels: Dangerous Flowers is a spoof of the well-known Charlie's Angels. It mimics the Hollywood movie (not so much the television series) with a small team of beautiful girls who fight crime with their beauty and brawn. There is also a comical side with several goofy characters and odd situations. For the most part, "Dangerous Flowers" tends to be an average movie. It has some attractive features, such as the cast, and decent action sequences. However, the movie suffers from a subpar plotline that is less than appetizing.

"Dangerous Flowers" starts with the Chai Lai's in key locations to prevent a crime syndicate from acquiring the Andaman Pearl. Four of the heroines Lotus (Supaksorn Chaimongkol), Pouy-sian (Kessarin Ektawatkul), Spadix (Bunyawan Pongsuwan), and Hibiscus (Jintara Poonlarp) are on an airplane pretending to be passengers and stewardesses. On the plane is Miki, who is the bad guy's targets. She is a young girl who knows the secret location of the Andaman Pearl. Her father, a professor and martial arts expert, gave her something that hides its location. The bad guys intend to get it at all costs. The last Chai Lai, Rose (Bongkoj Khongmalai), is on the ground at Miki's home. Assassins were sent in to get Miki's father and she is there to stop them.

When the bad guys make their move, a massive fight breaks out on the plane. The airborne Chai Lai's are unsuccessful, as Miki is kidnapped by the bad guys. Rose has better luck and stops them from killing the dad, but he runs away. Back at headquarters, the Chai Lai's are chewed out for failing a simple mission by their handler (Petchtai Wongkamlao). He is an eccentric and odd fellow, similar to Charlie's Angels's Bosley.

Meanwhile, the bad guys try to get the location of the pearl from Miki. She refuses to tell them. They even bring in her birth mother Mei Ling (Pornnapra Theptinnakorn), who is working with them, and pretend to torture her. In their ranks is King Kong (Wanasak Srilar), who is an odd transgender villain who is purely there for laughs -- sometime it is funny and other times the character is just bizarre.

As the story continues, the Chai Lai's face off with the bad guys in a number of places, which include fighting clothed only in towels. There is a side development with Hibiscus and one of the local cops who often help out the Chai Lai's when they get knee deep in bad guys. Rose's love interest Gus is also included in the story. When the bad guys realize that the Chai Lai's are the only thing stopping them from getting the pearl and selling it for lots of money, they kidnap him in hopes they will back off.

Overall, Chai Lai Angels: Dangerous Flowers is a decent movie at best. There is nothing fantastic about it. From a purely entertainment perspective, it does not have much. The movie is likened to Charlie's Angels: Full Throttle and not the 2000 movie Charlie's Angel, which I thought was popcorn-quality fun versus its sequel. "Full Throttle" was an absolute waste of time. While "Dangerous Flowers" is not terrible on this level, it still lacks enough entertainment value to warrant a better comparison. The storyline is weak and simplistic. On a positive note, the characters were fitting. There was some overacting on the bad guys' parts, but it is expected from an action/comedy -- someone has to act goofy for the slapstick oriented comedy. The movie also incorporated a few goofy situations, which were mostly based upon the Chai Lai's beauties conflicting with their fighting. In the end, Chai Lai Angels: Dangerous Flowers is does not stand out as a movie, but it was not an absolute waste of time. 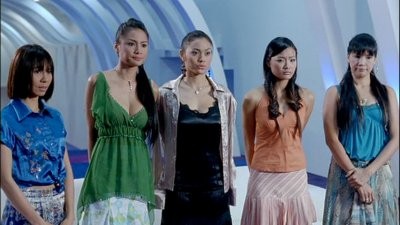 
Video:
The video in this release is given in an anamorphic 1.78:1 ratio widescreen color format. The picture quality is adequate. It suffers from a noticeable grain, which appears to occur as a result of video compression. Also during the action sequences, it is not uncommon for the camera to slightly jerk up and down. It is not the greatest looking film.

Audio:
The audio track in this release is given in dubbed English and Thai 5.1 Dolby digital surround. The sound quality is good. It sounds lot better than it looks, although some of the dubbed dialogue sounds almost out of place. It also does not match up with the English subtitles. There are different things said, but the dubbed track and subtitles have the same meaning. In addition to English subtitles, it is subtitled in Spanish.

Final Thoughts:
Chai Lai Angels: Dangerous Flowers is a decent action/comedy flick. In some respects, it does a pretty good job likening the Hollywood version Charlie Angels. The personalities of the characters are fitting, as well as their acting performances, and the inclusion of goofy and almost random comical situations. Unfortunately, the movie suffers from a bland and simplistic plotline that leaves little to entertain the viewer. In the end, the movie was headed in the right direction, but fell off the path and turned out to be a decent movie. If you feel so included rent it, but don't buy it.