New Video // Unrated // October 27, 2009
List Price: $99.95 [Buy now and save at Amazon]
Review by Stuart Galbraith IV | posted November 18, 2009 | E-mail the Author
Most of us here at DVD Talk also happen to be parents, and I think it's safe to say that while my fellow writers and I have widely varying tastes in movies and television shows, as a whole we'll sometimes snap up children's DVDs not so much out of aesthetic curiosity but rather nothing more or less than as a source of something to watch with the kids. I think it's fair to say most of the children's videos tossed onto our screener pile are utter rubbish (Barbie's 'A Christmas Carol' anyone?), but on rare occasions something like Scholastic's Treasury of 100 Storybook Classics comes along. While it's no substitute for actually reading real books to your child, this is a pretty fair alternative, the kind of massive collection of short film and direct-to-video adaptations of classic children's stories one can either watch with your child in small doses (versus long stretches with them glued to the tube) or as a worthwhile distraction for them as you struggle to prepare dinner while shuffling loads of laundry. 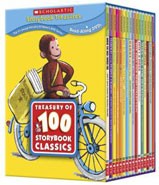 In short, this is a collection of 100 stories on 16 DVDs, running just over 19 hours in all. Most of the material was released previously, notably in nearly identical packaging (also with slimpack DVDs cases) in a boxed set released in February 2008 confusingly also called Treasury of 100 Storybook Classics. In that release an image from Maurice Sendak's Where the Wild Things Are dominates the box containing all the DVDs. This new release features H. A. Rey's Curious George on one side, Crockett Johnson's Harold (of Harold and the Purple Crayon) on the other. The suggested retail price is the same, but the contents are definitely different, though with some overlap.

Alligators All Around
The Amazing Bone
Angus and the Ducks
Angus Lost
Apt. 3
Arnie and the Doughnut
The Beast of Monsieur Racine
Blueberries for Sal
Cat and Canary
The Caterpillar and the Polliwog
Chicka Chicka 1, 2, 3
Chicken Little
Chicken Soup with Rice
Chrysanthemum
Click, Clack, Moo: Cows That Type
The Cow Who Fell in the Canal
Curious George Rides a Bike
Danny and the Dinosaur
Diary of a Spider
Dinosaur Bones
Dot the Fire Dog
Drummer Hoff
The Elves and the Shoemaker
Emily's First 100 Days of School
Five Chinese Brothers
Five Creatures
The Foolish Frog
Fourteen Rats and a Rat-Catcher
Frog Goes to Dinner
The Great White Man-Eating Shark
Harold and the Purple Crayon
Harold's Fairy Tale
Harry the Dirty Dog
Here Comes the Cat!
Hondo & Fabian
Hot Hippo
How Do Dinosaurs Eat Their Food?
How Do Dinosaurs Get Well Soon?
How Do Dinosaurs Say Good Night?
How Much Is a Million?
I Stink!
I Want a Dog!
I, Crocodile
If You Made a Million
In the Night Kitchen
Inch by Inch
The Island of the Skog
Let's Give Kitty a Bath!
A Letter to Amy
Lon Po Po
Make Way for Ducklings
Max's Words
Mike Mulligan and His Steam Shovel
Millions of Cats
Moon Man
Mouse Around
The Mysterious Tadpole
No Roses for Harry
Norman the Doorman
Officer Buckle and Gloria
One Was Johnny
Owen
Pet Show!
Peter's Chair
Pete's a Pizza
A Picture for Harold's Room
Pierre
Princess Furball
Rapunzel
The Remarkable Riderless Runaway Tricycle
Roberto the Insect Architect
The Snowy Day
Stanley and the Dinosaurs
Stars! Stars! Stars!
A Stonecutter
A Story - A Story
The Story About Ping
The Story of the Dancing Frog
Strega Nona
The Swineherd
Sylvester and the Magic Pebble
T if for Terrible
The Talking Eggs
Teeny-Tiny and the Witch-Woman
Time of Wonder
The Three Billy Goats Gruff
Trashy Town
The Trip
The Ugly Duckling
Waiting for Wings
Wallace's Lists
A Weekend with Wendell
What's Under My Bed?
Where the Wild Things Are
Whistle for Willie
Why Mosquitoes Buzz in People's Ears
Wild About Books
Wings: A Tale of Two Chickens
The Wizard

This set offers some short films not included in the earlier box while other stories, including Goodnight Gorilla, Is Your Mama a Llama?, and Corduroy have been excluded here, possibly due to expired rights to the film versions and/or the original stories themselves.

In any case, these adaptations seem to have been licensed from all over the place, though held by the same distributor. Harold and the Purple Crayon, for instance, is a one-reel, independently produced animated short directed by David Piel in 1959. Igor Kovalyov and Aleksandr Tatarskiy's Here Comes the Cat!, despite English-language signage onscreen, was produced in the Soviet Union just before its fall in 1992. A 1971 short cartoon adaptation of The Foolish Frog features co-writer Pete Seeger singing and narrating the soundtrack, and was a co-production between the United States and Czechoslovakia.

One film I looked at, Curious George Rides a Bike was not actually a cartoon but filmed pages of the famous book, with no actual animation. A handful of others, such as Let's Give Kitty a Bath! are live action, with no animation at all. Most of the material appears licensed from Weston Wood Studios. Some of the discs are grouped by author - Maurice Sendak gets one all to himself - others are vaguely grouped by subject matter: dinosaurs, counting, etc.

The collection is well designed in some ways but not others. The addition of optional English subtitles, featuring karaoke-style subtitles, is obviously a useful tool for beginning-level readers. The DVDs offer age recommendations (varying from 2-9), a good idea. Conversely, finding a favorite story is almost impossible without taking everything out of the box and spreading it across a kitchen table or flipping through it like a deck of oversized cards. (However, this isn't such a bad thing: I've been letting my two-year-old daughter choose which story she wants to watch, and that's worked out quite well.)

Presented full-frame, this is a set of 17 individually packaged DVDs, each disc running between 54-87 minutes apiece. The image quality varies slightly, depending upon the film source, the age and condition of the original elements, some now 50 years old, but most everything looks bright and colorful, and the mono audio is adequate. Also included are alternate Spanish audio tracks for Click, Clack, Moo: Cows That Type, Curious George Rides a Bike, Danny and the Dinosaur, Harry the Dirty Dog, How Do Dinosaurs Say Good Night?, Make Way for Ducklings, Moon Man, Owen, Strega Nona, Sylvester and the Magic Pebble, The Caterpillar and the Polliwog, The Snowy Day, Where the Wild Things Are (also French audio on this), Whistle for Willie, and Why Mosquitoes Buzz in People's Ears.

Supplements include an interview with Maurice Sendak and a slim but worthwhile 14-page activity booklet, with coloring pages, connect-the-dots, and other activities related to the various stories.

Though parent-approved the real question was whether my two-year-old would embrace this set or not and, for the most part, she has, enormously enjoying the majority of story adaptations, some of which she now wants to have her parents read to her in book form. Which, I suppose, is exactly the point.