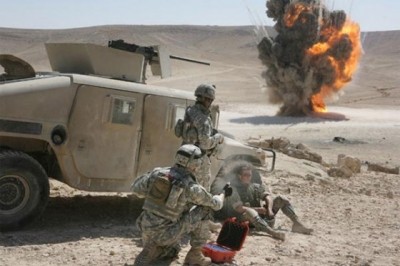 The Hurt Locker is an
intense war picture that balances gripping suspense with thoughtful
character development while eschewing the politics of the highly divisive
war that it documents. As with most great war movies, this is
one of its biggest strengths. There was a time when it was understood
that war was simply hell - and that relative considerations of a war's
justness or legitimacy paled beside that naked, raw reality. The
Iraq War has been the subject of nonstop politicized abstraction -
but The Hurt Locker does us the service of bringing the hellishness
back to the surface.

The film follows a three-man
bomb disposal unit (technically an EOD, or Explosive Ordinance Disposal
unit) with the Army's Bravo Company in Baghdad circa 2004. After
the unit's leader is killed, Sgt. Will James (Jeremy Renner) joins
the group. The others, Sgt. Sanborn (Anthony Mackie) and Spc.
Eldridge (Brian Geraghty), are put off by James' reckless methods.
Tensions mount as James insists upon suiting up and approaching ordinance
in person, manhandling explosives and placing himself unnecessarily
in harm's way, instead of sending in a sophisticated bomb disposal
robot. The stakes are ratcheted up when James comes to believe
that a young boy who sells DVDs at the base has been killed by insurgents;
this leads to an increasingly risky series of events that results in
Eldridge sustaining a leg wound and being shipped out. As Sanborn
and especially Eldridge show increasing signs of having been broken
down by the war, James remains resolutely enthusiastic about his work.

The film begins with a quotation
from Chris Hedges' book War is a Force that Gives Us Meaning
that addresses the seductive qualities of wartime: "The rush of battle
is a potent and often lethal addiction, for war is a drug."
This makes for an excellent jumping-off point for a look at James'
character. Yes, he appears to feel a great rush and a counterintuitive
ability to focus in the midst of grim life-or-death situations, but
is he just a war junkie? To what degree are his impulses self-destructive?
Does he have a death wish? Or is he simply good at his "job"
and at a loss as to what else he could ever excel at in the world?
These questions are not easily or simply answered by The Hurt Locker,
to its great credit. James is a complex character, whose motivations
are plausibly opaque and inscrutable. It helps that Renner's
performance is incredibly skilled. This relatively young actor
delivers a natural portrayal marked by an extraordinarily mature sense
of subtlety. I must admit that I have not seen Renner's work
before this, but I will certainly not fail to follow it from here on
out.

Renner's deft lead receives
very able support from Mackie and Geraghty. Geraghty in particular
looks and sounds like someone who has served in the Army; his brokenness
is quite moving at times. Guy Pearce, David Morse, and Ralph Fiennes
appear in well-cast cameo roles.

The script by Mark Boal is
alternately patient and punchy. Dialogue is appropriately sparse
yet effective. Character development is parceled out in tiny pinpointed
doses. Director Kathryn Bigelow - whose sense of the military
is both more charitable and more realistic than her ex-husband's bizarre,
fetishistic mistrust of the armed forces - allows the longer set-pieces
to develop slowly, downplaying unexpected moments, rendering them far
more effective. I'm thinking specifically of sequences in which
James pulls a pistol on an errant taxi cab driver who finds himself
in the middle of a disposal perimeter, and the scene in which James
carefully directs Sanborn as he picks off snipers miles across the desert
floor. Patience and restraint of the type Bigelow displays here
is exactly what make suspense play on film, and is in direct opposition
to the offensively overblown carnival of horseshit thrown in our faces
by the likes of Michael Bay.

The success of truly interesting
movies often lies with the things that are most difficult to describe,
and that is certainly true of The Hurt Locker. On one hand,
I'm not willing to say that it is an outright masterpiece, as many
have branded it. I say this because, thematically, I don't think
it offers anything truly new. My other chief criticism comes out
of a suspicion - but not direct knowledge - that the movie's scenario
is far from realistic. I just don't buy that bomb squads behave
like this EOD. Almost everything that happens in The Hurt Locker
is deep within court-martial territory, but these kinds of consequences
are never mentioned. On the other hand, it's an expertly-crafted
and brilliantly acted movie that, more often than not, succeeds in suspending
viewers' disbelief. The lack of a straightforward psychological
attribution of James' character and behavior is a finely-tuned risk
taken by the filmmakers that will resonate timelessly with viewers.
James is memorable for reasons that are elusive, and that is the main
reason The Hurt Locker is one of the best movies of 2009.

The enhanced 1.78:1 transfer is excellent. Bright daytime
scenes are vividly detailed and darker sequences feature heavy blacks.
The dusty, dried out look of the production design is just saturated
enough to look realistic and unfiltered. The photography retains
a documentary feel while avoiding the headache-making jerkiness of more
self-conscious filmmakers.

Both the 5.1 surround and 2.0 stereo tracks are deeply engaging,
utilizing broad, ambient soundstages. Surrounds are both subtle
and, when appropriate, quite literally bombastic. Both tracks
are well-mixed and very immersive. It's worth noting that dialogue
is never lost amid the many sound effects.

There are only a few extras here, but this film is a likely candidate
for the Criterion treatment, so I hope a more generous selection of
bonuses with attend a future DVD and Blu-Ray edition. First, there
is an engaging full-length audio commentary by Bigelow and Boal.
Their discussion of story development and the technical aspects of the
production are particularly enlightening. There is a short and
forgettable making-of featurette, and a still gallery.

The Hurt Locker is a hard-to-find thing: a character-driven action
drama that is both thrilling and astutely-scripted. Kathryn Bigelow's
directorial mastery deserves an Oscar, at least. It's certainly
the best film set during the Iraq War. Highly recommended.