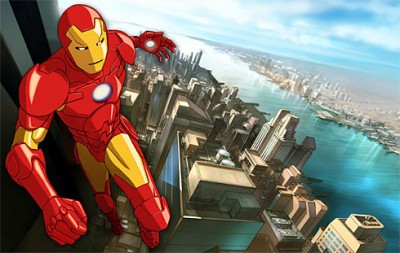 As a character, Tony Stark/Iron Man has always been a little too much for me to swallow. Fine, Superman's from another planet and has a catch-all array of superpowers. Batman is "just a man," but a very wealthy one with a memorable dark streak. But Tony Stark? Well, he's basically Howard Hughes - if Howard Hughes had an atomic heart implant keeping him alive, a superhuman command of the practical applications of physics, and of course enormous wealth and a king-like command of immeasurable corporate resources. Oh, and plus: Stark flies around in a rocket-powered exoskeleton that gives him the strength of ten men and access to every piece of technical data in existence.

So he's a superhero. But that's a lot of "special powers." Still, the 2008 blockbuster feature version of Iron Man with Robert Downey, Jr., was a hell of a lot of fun, and I'll certainly see the sequel. The disc in question here collects the first six episodes of the animated Nicktoons series Iron Man: Armored Adventures, which was produced and timed to capitalize on the feature's success. Whereas Bruce Timm's animated superhero adventures are meant to be largely canonical in nature, tying into DC characters' established histories, this series deviates from Stark's "biography" by recasting him as a teenager. As if Stark's many talents and gifts weren't hard enough to choke down, they are now attributed to a sixteen-year-old. I applaud this show on some levels (see below), but its premise is ridiculous. Iron Man is a weak superhero - too glossy, too fancy, with too many privileges, which makes it hard to empathize with him. Making him a teenager just adds to the absurdity.

Taking its lead from the 2008 film, the two-part pilot episode, titled "Iron, Forged in Fire," has Tony Stark taking over his father's company when Stark, Sr., dies in a plane crash. Believing his father's associate Obadiah Stane to be behind the crash, Tony suits up and uncovers a plot by the Mandarin to reclaim the powerful Makluan rings. In subsequent episodes, with the help of his friends and schoolmates Rhodey and Pepper Potts, Iron Man faces down the Mandarin again, along with Blizzard and the Crimson Dynamo.

The stories of the episodes are largely predictable and offer a generic level of narrative suspense. Unsurprisingly, character development is scant. However, what does set this series apart is its interesting (if not entirely successful) visual style. I don't know the technical details of the animation process or processes used, but it's a computer-generated approach that incorporates a significant nod to a classic 2D look. The overall design is lovely and more refined than the average television cartoon show. Backgrounds look especially good, and lighting effects are well-rendered. On the other hand, character design gets short shrift. Bodies in motion look jerky and stiff, and mouths move without regard to dialogue - it's like watching a poorly dubbed film in that regard. The lack of attention to character detail is especially distracting because backgrounds and the overall design - particularly during action sequences - are so strong.

These six episodes are generally fun, despite the caveats I've enumerated above. Stark is appealing as a personality, even if totally implausible as a high-schooler. His curiosity motivates him, and a self-taught genius can't be too bad of a role-model, I guess. I think it's a great show for kids. While Iron Man: Armored Adventures doesn't have the sophistication or grasp of the epic shared by Justice League or Batman: The Animated Series, it's an enjoyable show that indulges in some pretty visuals and maintains just enough brains about it.

The Package
Genius Products has packaged the single disc in a standard keepcase adorned with bold yellow-and-burgundy artwork. This is all inside a disposable card slipcover.

The Video
The full-frame image is very strong. The color palette of the show is softer and more carefully modulated than the cover artwork would suggest. A fairly dynamic visual experience, the video quality here holds up well. Colors are bold, with fine gradations that are achieved without artifacts or other evidence of compression or shortcuts.

The Audio
An excellent 5.1 surround soundtrack is included here, and it's a trip. The rocking theme song by Rooney starts each episode with a bang, and action sequences feature some unusually active - and loud! - surrounds. Nice work here by all, with a wide-ranging mix that is subtle at appropriate moments, as well as explosive when it needs to be.

The Extras
Just a few 30-second promos for the show - called Suit Profiles on the packaging - and a music video for the Rooney theme song.

Iron Man: Armored Adventures is a pretty fun show that kids should enjoy quite a bit. It stretches credulity - even for the genre - but serves up some engaging action in a visually-interesting package. For the general audience, rent it.