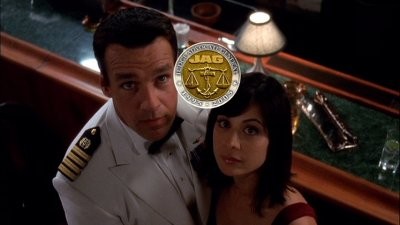 After an exciting ninth season, JAG returns for its final season ten. Season ten is a fine addition to the series and a great way to end it. There are several enticing developments that include looking for a new Judge Advocate General, closure to the Harm-Mac relationship, a few new characters, and plenty more. As for the episodes, they tend to be of the same caliber as past seasons. Fans of the series will definitely want to pick up this set.

The season starts with "Hail and Farewell (Part 2)", which concludes the season nine cliffhanger. Webb was killed in action and Mac struggles to accept his death. She is convinced that he is still alive and in hiding. She unravels clues to his whereabouts, which lead with a bang. She works along with British spy Tanvier. As Mac goes through her personal issues, the JAG office is in slight disarray. Since Chegwidden retired as the Judge Advocate General, Turner is appointed as the acting JAG while a replacement is found. Turner's temporarily boost in position causes some issues with the rest of the staff. He ruffles feathers, as his way of doing business is not quite the same. In particular, he creates a fairly big rift with Harm.

In the episode "This Just In From Baghdad", the hunt for the new JAG nears an end. SECNAV has found his man, Colonel Gordon Cresswell. There are concerns about his character and the fact he is a Marine and not Navy. After much scrutiny, he is given the job and promoted to Major General in "One Big Boat". The actual selection of Cresswell does not make for an interesting storyline, but his role on the show adds some value. While he is not Chegwidden, he brings a different perspective to the show, which is a nice change of pace. When he takes control of JAG, he is quick to get his house in order. At first, Mac feels like she is being singled out. Cresswell prosecuted the officer she had an affair with.

There are a few other new characters. Towards the end of the season, JAG lawyers Gregory Vukovic (Chris Beetem) and Tali Mayfield (Meta Golding) are assigned to the office. Of them, only Vukovic is a reoccurring character while Mayfield is a guest star. Vukovic brings an interesting role to the show. He has his own way of dealing with tough situations and is willing to bend the rules to suit his needs. He is frequently likened as a younger version of Harm. For example, he really shows off his bravado in "Straits of Malacca" when he goes against Mac's orders and tries to stop a group of pirates by himself. Another new character is Catherine Graves (Jordana Spiro, My Boys), who is also a guest star. She is not part of JAG, but works with them on a couple occasions outside of the office. Like Cresswell, these characters give the show a change of pace for the better.

As for the show's existing characters, there are a number of entertaining developments for them. My favorites this season involved Bud getting into a fight. He is mislabeled as having anger management issues and sent to group counseling. It is a somewhat silly development, as additional things happen around him that indicates angry issues. Mikey develops a relationship with the general's daughter, which gets pretty serious. Big Bud is called up to active duty in Iraq, despite being retired, and decides to challenge it. However, he realizes the importance of serving again and works out a deal acceptable to everyone. The Harm-Mattie relationship continues to develop, but it is not as substantial as in season nine. It gets pretty dramatic as the show comes to a close.

The season episodes tend to stick to modern day issues, which are the wars in Iraq and Afghanistan. Some of the stronger ones are "Retrial", Harm has to cut through red tape (Turner) to get a seaman wrongfully accused of murder out of jail, "Camp Delta", guards at Guantanamo Bay put an undercover soldier in a coma, "There Goes The Neighborhood", Coates' old friend visits and brings a world of trouble, "Fit For Duty", a psychiatrist is accused of malpractice after a Marine is killed in action who she said was fit for duty, and "Death at the Mosque", Vukovic defends a marine who killed a civilian during a raid. However, the most important episode to the series is the finale "Fair Winds and Following Seas". Cresswell announced at the end of "Dream Team" that Mac is being sent to San Diego and Harm to London. In the finale, they consider their relationship and what they will do being sent so far from each other. It is a good way to end the show and provides some (unspoken) closure to the chemistry between Harm and Mac.

Overall, JAG's tenth and final season continues to offer plenty of drama, action, and excitement. However, the episodes are not as strong as the past season. They tend to be pretty typical with some overly intense, but more often than not, common JAG-like storylines surrounding modern day issues. On that note, I was not pained to see this show end at season ten. I think it had a great run and I liked the way it came to a close. Beyond the episodes, I enjoyed the character development. There were fun situations involving the Roberts, as well as the new characters helped keep things a little fresher. In the end, JAG's tenth season is a great way to end the show. 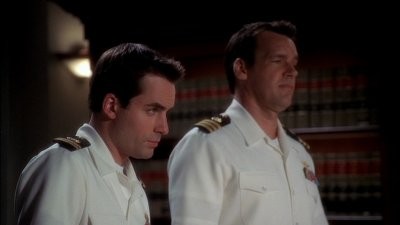 1. Hail and Farewell (Part 2): Mac becomes convinced that Clayton Webb is still alive and risks her life trying to prove it. Turner is temporarily named Acting Judge Advocate General.
2. Corporate Raiders: Harm defends a private military contractor who engaged with Marines in Iraq, resulting in a casualty. Mattie starts to spend more time with her real father.
3. Retrial: In order to get a new trial for a convicted killer, Harm must win over Turner, the Secretary of the Navy, and the President. Mac's annoyed by a bigamist with four wives.
4. Whole New Ball Game: As the competition heats up to find the next Judge Advocate General, the President's choice remains Colonel Gordon Cresswell, a no-nonsense Marine.
5. This Just In From Baghdad: After a Marine fails to protect the life of a visiting official, Mac and Harm head to Baghdad for his court martial. Colonel Creswell has everyone walking on eggshells.
6. One Big Boat: Bud worries when his brother Mike stays loyal to his sailing captain, even after a female shipmate is swept overboard. Mattie's father petitions for full custody.
7. Camp Delta: An Army spy who posed as a Guantanamo Bay detainee is severely beaten by guards, who are put on trial. Bud is arrested fro punching a belligerent civilian.
8. There Goes the Neighborhood: Jennifer Coates gets a visit from an old friend, a former thief who is constantly in trouble. Bud defends a female pilot who gave civilian flying lessons.
9. The Man on the Bridge: When a Navy research goes missing, Mac and Harm investigate whether it was suicide or murder. Bud helps a female boxer who wants to compete with men.
10. The Four Percent Solution: Unconscious from a car accident, Mac flashes back to her day spent talking to a shrink. The topics? Insomnia, infertility, Agent Webb, and Commander Rabb.
11. Automatic For the People: After a jet crashes near a playground in California, Harm investigates and begins to suspect there was no pilot. Violence erupts in Bud's anger management class.
12. The Sixth Juror: Coates is ordered to assist Harm and Mac when they travel to Key West for a murder trial, and is promptly drafted by the judge to be one of the jurors.
13. Heart of Darkness: Mac and Harm defend a controversial Marine in Afghanistan who is searching for Osama bi Laden. Bud's father protests when called to active duty.
14. Fit For Duty: The dearth of a gung-ho soldier sparks a debate as to whether his psychiatrist sent him back into battle too soon. Bud handles a case that smacks of ageism.
15. Bridging the Gulf: While investigating an attack on a fishing boat in the Persian Gulf, Harm shoots down a dignitary's plane. The theft of a vehicle becomes an international incident.
16. Straights of Malacca: Cresswell orders Mac and JAG lawyer "Vic" Vukovic to Indonesia to negotiate with a pirate who hijacked a ship. Bud and Harriet host a party for the twins.
17. JAG: San Diego: While Mac, Vic, Cresswell attend a JAG conference in San Diego, Harm stays behind in DC, where he learns that Mattie was involved in a serious accident.
18. Death at the Mosque: A Marine private kills a civilian during a raid on a mosque -- an accidental death caught on film. Cresswell's daughter asks Mac for career advice.
19. Two Towns: After 17 soldiers are killed in an explosion in Iraq, the lone survivor heads home, only to wind up in jail. Meanwhile, Mac visits the bombing suspect's mother.
20. Unknown Soldier: Cresswell's brother, a former SEAL, needs help identifying his war buddy's remains. A military doctor disobeyed orders when she tended to an Iraqi child.
21. Dream Team: Harm and Vic butt heads when they are both assigned to the same manslaughter case. Mac must defend a sailor who freed two Navy-trained dolphins.
22. Fair Winds and Following Seas:After Harm is reassigned to London, and Mac to San Diego, they both reflect on their relationship. Later, they surprise their friends with a startling announcement. 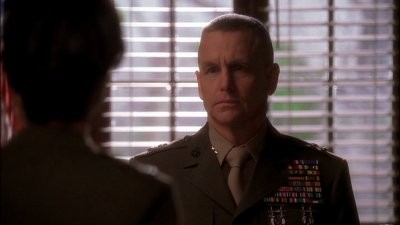 
Video:
The video in this release is given in anamorphic 1.78:1 ratio widescreen color format. The picture quality is quite good. It suffers from a slight grain, but detail remains to be sharp and clear. However, there are some occasional moments when the picture suffers compression artifacts. This is a rare occurrence, but it does happen.

Extras:
The Final Goodbye (2:18) is the only extra included with this release. The cast and crew says goodbye's and thank you's after filming the series finale.

Final Thoughts:
In JAG's final season, there are several new developments and characters. I thought the season was strong and that the cast changes helped keep it fresh. The episode content tended to be cases-of-the-week common with the show. It did not have the same intensity as the past season. Despite, there were still enough to keep the show entertaining. On a similar note, I was happy with the way the show ended. I think there was good closure to the biggest unanswered question (Harm and Mac). In the end, JAG does well in its final season and will offer an entertaining experience for fans of the show.