New Video // Unrated // December 15, 2009
List Price: $26.95 [Buy now and save at Amazon]
Review by Chris Neilson | posted December 19, 2009 | E-mail the Author
Did you know that the largest living organism on earth is a 3.4 square mile fungus in Oregon, or that beneath the earth's landmasses a dense forest of fungus is responsible for decomposing bio-matter, or that mushrooms can clean up oil spills, or that Shitake mushrooms may lower blood pressure, or that Jesus Christ might have been an advanced form of intelligent fungus?

Well the first four are true enough anyway, while the last point is a debatable theory advocated by John Allegro author of The Sacred Mushroom and the Cross (1970). By comparision the late fungophile-philosopher and psychonaut Terence Kemp McKenna's "Stoned Ape" hypothesis of human evolution which holds that mushrooms provided certain proto-humans with an evolutionary edge by increasing visual acuity, fertility, and mental capacity sounds perfectly reasonable. All these facts and theories are but a small part of that available in Ron Mann's 2008 documentary Know Your Mushrooms.

Canadian documentarian Ron Mann is no stranger to passionate subcultures. His past documentaries have focused upon marijuana legalization advocates (Grass), the comic book industry (Comic Book Confidential), a fad dance craze (Twist), custom hotrods (Tales of the Rat Fink), and new-age environmentalists (Go Further). Through these films, Mann has developed a keen sense for enabling passionate enthusiasts and dedicated crusaders to convey their message in a way that informs and entertains a dispassionate audience without being either condescending or boring.

Mann's principal documentary subjects are mycologists Larry Evans and Gary Lincoff. Evans, billed as the "Indiana Jones of mushrooms", has quested from northern Alaska to Latin America in pursuit of exotic mushrooms. Lincoff is the consummate academic expounding upon the limitless virtues of wild fungi while pointing the finger at the establishment mushroom growers as self-interested fear mongers scaring Americans unnecessarily about the dangers of wild mushrooms; turns out only a few varieties will make you long for death if you ingest them, and even fewer will actually kill you.

The gastric, medical, and industrial uses of mushrooms are all touched upon, but the role of 'shrooms as psychotropic drug is the obvious draw of a documentary such as this, and of course, Mann, the director of Grass, gives ample attention to the subject though he does make his audience wait thirty minutes before finally delving into psilocybins, a.k.a. "magic mushrooms". Here we see some archival footage of '60s academics trippin' 'shrooms, a pair of contemporary crunchy granolas partaking outside a Telluride coffee house, and Gary Lincoff recounting his first trip. Surprisingly, aside from some off the wall theories about mushrooms being alien life and/or the secret origin of Santa, this portion of the documentary is probably the least interesting of all.

Mann attempts to keep the documentary from bogging down through very short segments, frequent humorous fungi fact, lively animation, and engaging music, including music especially commissioned for this documentary from the Flaming Lips and the Sadies. Though bits of the doc do drag, it feels Mann has just skimmed the surface of his subject.

Presentation
Video & Audio:
Know Your Mushrooms is presented in anamorphic widescreen (1.78:1). Colors are warm, but the image suffers from being interlaced.

5.1 and 2.0 Dolby Digital mixes are offered. The 5.1 mix sounds very good for a documentary of this kind with dynamic separation across the channels, crisp dialogue, and no distortion.

Subtitles are not offered on this release.

Extras:
Extras include the 14-minute informational short Welcome to the Fungal Jungle narrated by Larry Evans, a ten-minute lecture by Gary Lincoff delivered at the Telluride Mushroom Festival, six minutes of deleted scenes, a video recording of a CBC radio interview with Ron Mann (17 min.), a teaser, an interactive listing of fungophile clubs in North America, and an extended "Fun with Fungi" interactive trivia game. 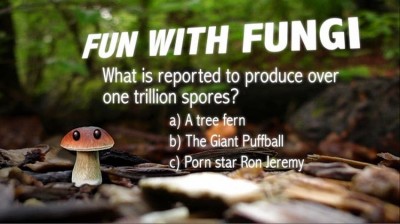 Final Thoughts:
Even at just 73 minutes, Know Your Mushrooms, Ron Mann's documentary about fungophiles and mycologists sometimes drags, but it's a mostly enjoyable peek into a passionate subculture.