Bushido - The Cruel Code of the Samurai

AnimEigo // Unrated // February 9, 2010
List Price: $24.98 [Buy now and save at Amazon]
Review by Stuart Galbraith IV | posted February 11, 2010 | E-mail the Author
Though widely regarded as one of Japan's greatest filmmakers - during the 1950s, his movies won Kinema Jumpo's annual Best Film Award five times - Tadashi Imai (1912-1991) is a director whose movies have been frustratingly hard to see in the west. Bushido - The Cruel Code of the Samurai (Bushidô zankoku monogatari , 1963) represents the first official DVD release of an Imai film in America.

It's an excellent if almost unbearably, relentlessly depressing film that's innovative and unusual in many ways, and it features a revelatory performance by star Kinnosuke Nakamura. AnimEigo's transfer is excellent, and the supplements help put the film and its story into historical and cultural context. 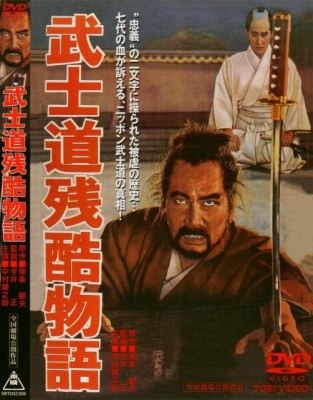 (Major Spoilers) The movie opens in present-day Tokyo, at a hospital in Shibuya, where salaryman (white-collar worker) Susumu (Kinnosuke Nakamura) rushes to the bedside of his fiancé, Kyoko (Yoshiko Mita), who has attempted suicide. In voice-over, Susumu says that despite everything he has continued the tragic pattern of his ancestors. Recalling a family record passed down through the ages (kept for many years at his hometown temple), Susumu relates his family's history.

In Shinshu Province, after the Battle of Sekihara in 1600, one ancestor, Jirozaemon (also Nakamura, this time wearing a big scar and bushy eyebrows) is a ronin accepted into the Yazaki Fief, who selflessly takes the blame for a mistake in battle, committing seppuku (a.k.a. hara-kiri) to spare his master, Shibiku Shosuke Hori (played by Eijiro Tono). Hori promises to treat Jirozaemon's family well.

Later, Shuzo (Nakamura) is a loyal samurai to the sadistic Shibiku-Shosuke Yasutaka Hori (Shinjiro Ebara), who orders Shuzo to sacrifice his daughter, Sato (Kikko Matsuoka) as a bribe to cover up Hori's bungling on an unrelated matter. And later, the lustful lord casually orders Shuzo to send his wife, Maki (Ineko Arima), to his private chambers.

Yet more cruelty follows. During the Meiji Restoration a mentally-ill former fief lord (Ko Nishimura) is generously taken in by lowly rickshaw driver Shingo (Nakamura). But the crazy, lecherous old man orders the misguided youth into surrendering his fiancé, Fuji (Satomi Oka). During World War II another member of the Iikura clan becomes a kamikaze pilot.

Back in modern times, Susumu's section chief, Yamaoka (also played by Nishimura) learns that Susumu's girlfriend is an executive typist at a rival firm likewise bidding on a dam-building contract. Using his power and influence over the young man, Yamaoka persuades Susumu to ask Kyoto to steal bidding data from the rival firm.

Despite telling variations of the same basic story seven different ways, Bushido is an endlessly fascinating, often shocking drama with an impressively versatile Kinnosuke Nakamura at its center. (He deservedly won Japan's Blue Ribbon prize as Best Actor, while the film won the Golden Bear at the Berlin Film Festival.) I was never particularly enamored of the Toei star (1932-1997) who specialized in larger-than-life jidai-geki and chanbara roles, but he's positively chameleon-like in this. Viewers not familiar with the actor might reasonably assume seven different actors played the various Iikuras. A few are distinguished by heavy makeup, but mostly their subtle differences are the result of Nakamura's fine performance.

The best and longest vignettes are the ones with Masayuki Mori (of Rashomon and Ugetsu fame) and Shinjiro Ebara (Under the Flag of the Rising Sun) and the last segment with Ko Nishimura (The Bad Sleep Well). Mori's gay seduction/rape of Nakamura's character is unnervingly realistic; such explicitness was quite unimaginable in a Hollywood film at this time. (Mori's lord bites Nakamura and Kishida, leaving permanent teeth marks of "ownership.") Even Japanese audiences must have found these scenes quite shocking, especially considering at the time Toei's core audience consisted mainly of working-class men - truck drivers and construction worker-types - hardly an art house crowd. Though not particularly graphic, Mori and Nakamura play these scenes with great honesty and without a trace of self-consciousness.

The vignette with Lord Ebara is notable for its sadism. Ebara's Lord Hori is so cruel he shoots arrows into rabbits for kicks, taking pleasure in watching them squirm in agony, a scene unfortunately not faked. Later he decides to execute some starving farmers by a means I've never seen before, "sawing." They're forced to sit in a hole neck-deep, and with their heads locked in place their executioners literally saw their heads off. Ebara's salivating enthusiasm during this is, to say the least, disquieting.

Bushido - The Cruel Code of the Samurai is presented in its original black & white, Toeiscope aspect ratio of 2.35:1 with 16:9 enhancement. The transfer looks great throughout, with strong blacks and good sharpness. The mono audio (Japanese only) is also fine, and the viewer has myriad subtitling options to choose from, including color or monochrome, full or dialogue-only (or none at all). The DVD-9 is Region 1 encoded.

Extras include AnimEigo's usual historical program notes and short text biographies of director Imai and actor Nakamura. Film historian Randy Schadel provides a good essay on the concept of bushido, and there's an image gallery. Best of all are two 16:9 enhanced and fully subtitled trailers for the film, both of which provide rare footage of Toei-Kyoto Studios and Tadashi Imai and his crew at work.

Bushido - The Cruel Code of the Samurai is an excellent if relentlessly bleak film from a master filmmaker who deserves to be better known in the west. Hopefully this fine DVD of one of his most acclaimed works will ignite further interest in the career of its director, Tadashi Imai. A DVD Talk Collector Series Title.