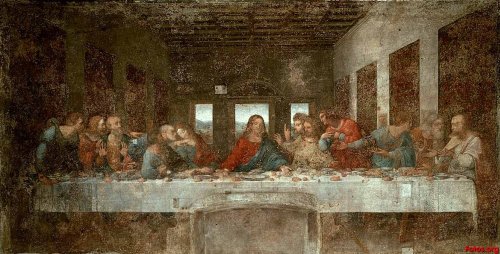 Christianity: The First
Two-Thousand Years is a documentary originally broadcast on A&E
in 1998 and 2000. This DVD release does not add anything new,
but it's a decent presentation of a solid documentary worth checking
out if you haven't already. It's a substantial, weighty treatment
of its subject, an approach that is increasingly out of step with the
cheesy, overripe "documentary" programs currently seen on The History
Channel and other places.

Divided into two parts (each
treating a millennium) and narrated by Ossie Davis and Ruby Dee, the
6 hour and 40 minute documentary compiles contemporary video footage,
still images of art and architecture, and interviews with scholars and
ecclesiasts. The whole is expertly edited into a seamless narrative
that maintains its complex story while incorporating divergent viewpoints
and a relevance to contemporaneous time periods. This ambitious
survey tells of Jesus and the Apostles; the fathers of the early Church;
medieval Catholic philosophers; the Protestant Reformation; the Inquisition;
and much more, up to and including Mormons and modern day American evangelicals.

Despite the sweeping scope,
we are afforded intimate, detailed portraits of important figures such
as St. Paul, Constantine, St. Augustine, Empress Theodora, Charlemagne,
Otto the Great (and Otto II), St. Dominic, Martin Luther, and Henry
VIII. These mini-biographies are helped by the input of Professors
Paul Maier of Western Michigan University, Elaine Pagels of Princeton,
Karen Jo Torjeson of Claremont Graduate University, John Dominic Crossan
of DePaul University, Jeffrey Burton Russell of Loyola Marymount, and
many others. The commentators are generally engaging; their vast
command of the subject renders their participation enthusiastic and
energetic. Never do they come off as aloof or condescending.
Pagels and Crossan are particularly good storytellers, as their many
best-selling books would suggest. Close editorial attention results
in seamless transitions between narration and interviewee comments.

The whole program is cohesive
and visually appealing, although occasionally marred by unfortunate
editorial choices such as weird color filters. Still, a major
strong suit of this documentary is the consistent relevance of its imagery.
Lesser productions rely on repetition of images and film footage, which,
after a while, render such visuals meaningless as the viewer's eyes
glaze over. This one maintains a constant flow of new images that
effortlessly complement the narration or commentary, avoiding repetition
and hence staleness.

Christianity: The First
Two Thousand Years avoids value judgments, although it certainly
treats its subject with reverence. It does not include interviews
with anyone who disputes Christianity's core tenets, which is unsurprising.
Nonetheless, it comes off as philosophically even-handed, presenting
the storied history of Christianity's development and spread with
a view to well-established facts, avoiding controversy and interpretive
commentary.

The visuals on this two-disc
set are not too spectacular, but neither are they disappointing.
Different image sources result in varying quality. The original
interviews and other footage look very clean, while archival footage
often looks shoddy, sometimes even pixilated. Digital artifacts
are light but ever-present. It's not a distractingly awful image,
but it could certainly have been better.

The stereo soundtrack is acceptable, clear, and without significant
flaws.

The sole bonus is an interactive graphic Historical Timeline,
which is a helpful contextual marker for the vast number of events covered
in the documentary.

While not the best of its kind,
Christianity: The First Two Thousand Years is an engaging, informative
documentary that lives up to its task. For those who already own
this, there's absolutely no need to revisit now, as this release repackages
the two discs into a single standard-width keepcase with new jacket
art. For everyone else, I suggest you Rent It.