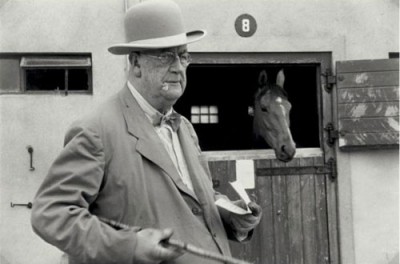 The father of photojournalism,
Henri Cartier-Bresson is not as well known for his films as he is for
his photographs. Known for his unromantic portraits of urban life
and coverage of war-torn corners of the world, the co-founder of the
international cooperative Magnum Photos and author of the book known
in English as The Decisive Moment was also a documentarian.
(He also served as second assistant director to Jean Renoir on two films,
one of which was The Rules of the Game, in which he also acted!)
This two-disc set from New Video thoughtfully compiles all of Cartier-Bresson's
films, as well as a collection of short subjects about the man and his
art.

Disc 1:
In his sideline as filmmaker, Cartier-Bresson made two documentaries
about the Spanish Civil War, one about prisoners of war returning home
after World War II, and, much later, two short television documentaries
in the United States. These five films are all included on the
first of the two discs in this set.

Victory of Life (1937,
46:53) is very much a pro-Republican propaganda piece documenting the
conditions on the ground in Madrid during the Spanish Civil War, for
citizens and soldiers alike. It's an effective film assisted
by the immediacy of the footage, much of which was shot on the front
lines, and edited with a strong narrative sense.

Spain Will Live (1938,
43:50) tells a more politically-focused story, one that explicitly demonizes
the Fascist-backed coup in Spain and details the political maneuvers
behind the war. It's as interesting as the companion piece that
precedes it.

The Return (1945, 32:22)
is an American-funded documentary about the return of former prisoners
of war to their homelands at the close of WWII. It contains much
very moving footage, though its arrangement here seems hasty, and the
narrative structure is weak. Still, it's of great intrinsic
value as an historical document.

California Impressions
(1970, 25:03) is the first of two short color films that Cartier-Bresson
did for CBS News. It is, as its title suggests, impressionistic,
lacking a narrative form. It's a collection of scenes - a
ladies' auxiliary luncheon/fundraiser, high school flag girl tryouts,
a United Farm Workers rally, antiwar protests, a strange "workshop"
for couples - that provide an overview of the vast variety of lifestyles
represented in the nation's most populous state.

Southern Exposures (1971,
25:13) is the second of the two CBS films. Cartier-Bresson provides
a voice-over introduction to his trip to the American south. Like
the California film, this one presents a variety of points of view and
experiences. We meet a woman whose plantation home is open to
tourists, Charles Evers (at that time mayor of Fayette, Mississippi),
attendees at a cattle auction, a group of liberal white discussing race,
and witness an altercation between state police and peaceful demonstrators.
Powerful stuff.

Disc 2: The second
disc contains material about Cartier-Bresson; only the final piece was
personally made by him.

Henri Cartier-Bresson: The
Impassioned Eye (2003, 52:04) is a recent piece made with Cartier-Bresson's
participation. He is interviewed here at around age 90, just a
few short years before his death. He remains a vibrant artist
with strong ideas and direct involvement in making photographs. The
documentary is dubbed, which I find distracting. I wish subtitles
were an option.

Henri Cartier-Bresson: The
Modern Adventure (1962, 29:25) shows the photographer at work and
in discussion of his artistic principles. This piece takes a somewhat
academic approach, which offers a nice contrast to the other films in
this set.

Contacts (1994, 11:51)
looks at Cartier-Bresson's contact sheets. This proves more
interesting than one might think. Movement from one shot to the
next, to the next, and so on, provides insight into how the artist sees
things, and into his compositional skills.

Flagrants Delits (1967,
27:25) is a straightforward montage of Cartier-Bresson's most well
known photographs. Accompanied by an angular, non-melodic musical
score by Diego Masson, this film is a nice introductory overview of
the photographer's work.

A Day in the Studio of Henri
Cartier-Bresson (2005, 15:43) was shot in 1989, and shows the artist
at work: drawing, talking, painting, and talking some more. This
is the only instance in this set of Cartier-Bresson speaking directly
into a camera.

Lest We Forget: A Letter
to Mamadou Ba (1991, 3:04) was made by Martine Franck and Cartier-Bresson
for Amnesty International to protest the killing of two young Mauritanian
shepherds by national police.

Video quality varies. Most of the content is full-screen,
with the exception of The Impassioned Eye, which is an enhanced
widescreen transfer. The older films show their age, but don't
look to be in bad shape. It doesn't appear that any significant
restoration was done, so we are lucky to have this material in decent
condition. The two CBS films are faded and a little dull.
The material on the second disc is more recent, and thus in better condition.
Overall the transfers appear to have been handled well, albeit without
any cleanup work.

Audio tracks are all mono, with the exception of The Impassioned
Eye, which is in stereo. The tracks are in good but not stellar
condition. They generally lack flagrant instances of damage, just
as they lack any dynamic range to speak of.

New Video has assembled a very thorough record of Henri Cartier-Bresson
on film. His own documentaries are valuable historical artifacts,
and the material about the artist on the second disc is wonderfully
diverse and informative. For anyone interested in the development
of photography in the last century, Henri Cartier-Bresson is without
a doubt a central figure. Recommended.