That's a lot of fights.

Basically, the Ultimate 100 was UFC and Spike TV's idea for a series of one hour specials, a breakdown of the organizations one-hundred best scraps as determined by an online fan poll.

The list came out and it was mostly as expected. The number one was a given, Forrest Griffin versus Stephan Bonnar from the The Ultimate Fighter live finale, a game changing, casual viewer-grabbing fight that is looked upon as the breakthrough for the UFC's modern wave of mainstream success. The list was also very recent era heavy, few fights from the early, trashier, no holds barred days are on the list, and barely any from the as yet on DVD dark days when the org was off cable ppv and barely scraping by.

A big oversight came from not including some fights from former champions like Frank Shamrock and Andrei Arlovski. Shamrock has long been vocal about his disagreements with UFC management since he left the organization in the late 90's. Arlovski on the other hand, at the time this special was compiled, had also left to compete in rival companies. How did their fights not make it on the fan-approved list? Well, it seems pretty simple. The UFC provided a list of fights to vote on and controlled the final results. Yes, there is no concrete proof of shenanigans, but it doesn't take a conspiracy theorist to determine there's no way fans looked at the breath of the UFC's fights and somehow chose, say, John Koppenhaver vs. Jared Rollins over Shamrock's classic battle with Tito Ortiz or Arlovski's first fight with Tim Sylvia.

The eight disc set does not include the Spike specials five episode format with edited fight highlights and comments from UFC mouthpieces and fighters. The DVD release instead is aimed purely at the fights, each and every single one, in their entirety, and only a few fights have their original prefight intro remarks by the fighters.

While its a pretty good list, just running down the numbers it is obvious some fights made it there simply because they were fresh on viewers minds. Plus, many of the older era fights and dark ages days in the late 90's when it was only on pay per view satellite channels are a blank on MMA's newer legion of fans. And, lets be honesty, MMA has come such a long way it's kinda' fair that some of those hard scrabble fights from the trashier era just didnt make the cut with people who discovered MMA in the last five years or so. As a fan who watched it grow, I'd like to see more classic on the list.

Its kind of an empty argument for me to run down what I think does and doesn't belong. Fight fans like different things, some prefer stunning knockouts, others look for technical acumen. Fights I see as three rounds of bad kickboxing are often applauded. Fights I see as nice grappling scraps others see as lay and pray snoozers. For me, Karo Parisyan Vs Diego Sanchez is the only top ten choice on this list that I agree with. It was a real, never a dull moment, never take a breath, back and forth war on the feet and the ground with plenty of jaw dropping moments. A few that I'm surprised didn't make the list are: for pure old school, Abbot Vs. Nelmark (UU '96), a fight that coined the phrase "Nelmarked" (forever referencing any time a fighter gets KO'd and collapses like a puppet with cut strings), Salaverry Vs. Semenov (UFC 37), easily one of the best technical scraps I've seen- period, Sudo Vs. Ludwig (UFC 42), Edwards Vs. Thompson (UFC 49), and finally, Bustamante Vs. Lindland (UFC 37).

It is a real mixed bag and as such Anchor Bay does include a little note of warning to viewers. Basically you have material from many different eras and the older it gets, the rougher the image. So, you have newer material that is Anamorphic Widescreen, often even high def quality, and then you have older fullscreen, analog quirky stuff that looks positively ancient in comparison.

Again, echoing the image, the audio is much the same but to a lesser degree. Its all 2.0 stereo, but of course, the older era stuff has a bit more raggedness to the mix while the newer stuff is much more clean and lacking some of the live audio stumbles.

Nothing. Just the fights.

But, now we come to the big deal. We might just have a packaging design flaw.

Each disc is housed in its own plastic hardshell, bookstyle sleeve and that sleeve is glued into a thick cardboard cover. Problem is, the page inserts are glued to the cover- the four white spots in the picture below- so that means the heavy DVD sleeve is glued to thin paper not the actual thicker cardboard housing. The moment I opened this set and lightly thumbed through the discs the plastic sleeve popped right off. 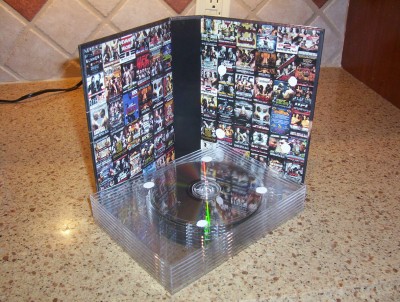 Now, will this happen with every copy of this set? I cannot say, except that, over time, its easy to imagine it will as the weight of eight DVD's in separate plastic housing is a lot for a thin bit of paper to hold. I'm going to try and adhere the sleeve back onto the cover with more adhesive, covering more area of the paper might prevent it from tearing off as easily, but, point is, if one is spending $14, $19, much less $50(+) on a DVD set, one shouldn't have to do arts and crafts.

Of course, hardcore fans are going to have copies of most of the fights. Yes, there are a little over handful of fights on this set that are not out on DVD. This being the information sharing age, you can certainly still find them, but its nice to have them on DVD- nicer to have the entire as yet on DVD events. So, really this set is more of a gift thing or a completists purchase. The potential packaging flaw is something to be very wary about. Of the list of choices available, I cannot quite say skip, cannot say rent, so I'll give it a hesitant recommendation.