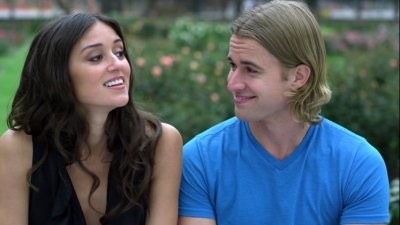 Frat Party is a comedy feature film set around a college-party with a romantic twist. The film tries to be something it is not: entertaining. If anything, watching Frat Party is a dull experience. The storyline is transparent and uninteresting. The characters are single-faceted and they never seem to grab your attention. The jokes are not funny. The only positive thing I can say about the movie is that the characters never get too annoying. Nevertheless, this movie is a dud. If you feel so inclined, keep reading. Otherwise, just skip it.

The movie opens with a monologue about the wild college life of main character Duffy (Randy Wayne). He talks about how his first three years in college were a nonstop party. He had lots of sex with gorgeous coeds (even twins) and female professors. Best of all, he belongs to the Gamma House, which is the campus's wildest fraternity. Despite all of the amazing girls he has had sex with, he is giving it up. He met the perfect girl and is marrying her in a manner of days. Their wedding happens to occur during the last week of school, which sadly, is when Gamma House is having their final party. Duffy wants to go, but his fiance Adriana (Caroline D'Amore) says no. Their wedding is the next day.

Duffy manages to convince her to let him go to the party. He intends to take a red eye flight to meet up with the family on the day of the wedding. Unfortunately, Duffy finds himself facing a slew of oddities full of piss & fart jokes and sexual humor. At the party, his best friends Mac (Jareb Dauplaise) and Chad (Dan Levy) prepare him for his last night as a bachelor. They visit Asian masseuses and it gets awkward and messy for everyone involved (and watching). I will not describe the event in detail, as it is on the lewd side and supposed to be humorous, but comes off as cheap. Next, Duffy has to fight off the advances of ex-girlfriends and adult film star Jesse Jane.

Behind the scenes, Adriana's dad is attempting to stop the wedding. He wants his daughter to marry Stefano (Robert Parks-Valletta), who is a sleaze-bag on his own right. He has dated Adriana and her younger sister Michela (Katerina Mikailenko), who still has her eye on him. Stefano crashes the frat party and prevents Duffy from getting to the wedding on time. On the day of the wedding, Adriana's family pressures her to marry Stefano instead. Duffy and Mac have to race against the clock to make the wedding on time.

Overall, Frat Party does not have what it takes to be a good movie. As earlier mentioned, it is lacking in almost everything. The storyline is very weak and seems to trail a lot of other films in this genre (imagine a lower budget version of Road Trip). The jokes are also poor quality and tend to leave you cringing and thinking "who thought that would be funny?". Furthermore, the characters are uninteresting with very little about them to really care about what will happen to them as the story progresses. The only good news is that despite the weak characters, none are so over-the-top that they come off as annoying. In the end, you are better off skipping Frat Party. 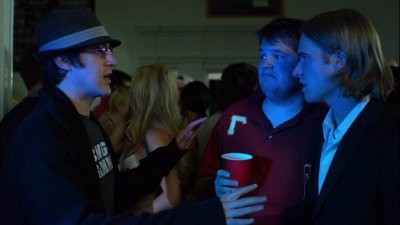 
Video:
The video in this release is given in an anamorphic 1.78:1 ratio widescreen color format. The picture quality looks pretty good. It suffers from a slight grain, which is more noticeable during the feature's dark scenes (at the frat party). Still, the picture is relatively clean.

Audio:
The audio is presented in English 5.1 Dolby digital surround sound. The 5.1 track is dynamic and makes decent use of the surround sound capability. In general, the sound quality is good and it provides an audible and clean track for dialogue. The DVD also has English subtitles.

Final Thoughts:
While Frat Party is not the worst movie I have watched this year, it comes pretty close. As a "comedy" is a light in laughs and tends to go for the cheap, sexual humorous angle. In some films, this approach works. Unfortunately, this movie tends to miss the target by miles and offers virtually no laughs. In addition, the movie is weak with its storyline and characters. In the end, there just is not anything to make Frat Party a worthwhile movie. It is an all-around lackluster movie.