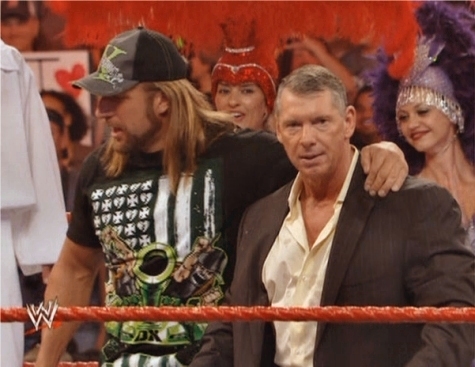 Generic Pre-Review Wrestling Disclaimer: Long before my affinity for globetrotting documentaries, Martin Scorsese films and The Criterion Collection, I found a soft spot for professional wrestling. Don't ask me how this happened; it just did. Despite this declaration, I shower daily, all my teeth are accounted for, I have a college degree...and, most importantly, I have a wife with the same merits. I'm not alone, of course. The wrestling fans I know aren't slack-jawed yokels; they simply appreciate the spectacle and illusion that this genuine sport creates, in the same way movie lovers enjoy fast-paced fights and thrilling chase sequences. Long story short: we know this stuff is "fake", but we like it anyway. Give us a break.

Monday Night Raw (later renamed to Raw) has been WWE's flagship show for nearly two decades now, yet it's only been the main subject of a handful of DVD releases thus far. Most recently, fans were treated to a 15th Anniversary Best-Of Collection, which captured the company finding its second wind from the mid-1990s onward. The Best of Raw 2009 obviously narrows the focus down a bit; on paper, it certainly seems like a good idea. Like Now That's What I Call Music or TV-on-DVD highlight collections, this three-disc set aims to remind fans about some of the major angles, introductions, direction changes and matches that took place during the year. On the plus side, fans who didn't catch every single episode can fill in the blanks---but for die-hard WWE disciples, The Best of Raw 2009 is like buying a greatest hits album even though you already own the band's entire back catalogue. Being in the former camp (at least in recent years), this seemed like a no-brainer for me to catch up...but I'm probably in the minority here.

Format-wise, The Best of Raw 2009 plays it straight from start to finish. Each month is divided by a brief collection of general highlights, allowing a few minor moments to get recognized (as well as a few repeats, oddly enough). Matches, interviews and other segments are presented chronologically; though some are given little to no context, even the most casual WWE fans should be able to follow along with little difficulty. Spread over three discs and running for roughly nine hours, this super-sized highlight reel has its fair share of ups and downs along the way. Here's everything that's touched upon during the show: 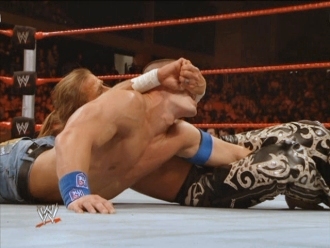 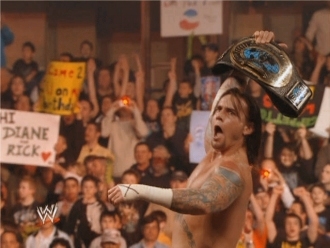 Disc One: January - May 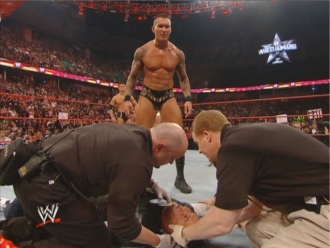 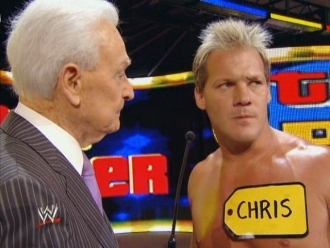 For starters, it's painfully obvious that over half of this content isn't wrestling, just talk...but to be fair, that's roughly in line with most episodes of Raw anyway. The problem is, of course, is that some of these interviews and other moments aren't exactly necessary, at least in the context of a highlight reel. Randy Orton brutally attacking WWE chairman Vince McMahon? Sure. Orton attacking McMahon's family less than a month later? You bet. Santino Marella teasing Chavo and Vicki Guerrero? Not so much. These promos, interviews, and other non-wrestling moments are simply too great in number---and though they're presented chronologically for obvious reasons, watching three or four in a row gets old fast. It's also annoying to see segments like "The Denver Debacle: Raw Moves to The Staples Center" covered not once, but twice: this infamous event (which centered on a scheduling snafu during the NBA Playoffs) was pushed to ridiculous levels of publicity due to McMahon's monstrous ego, and there's really no reason for it to take up additional space here.

Luckily, several of the matches (remember those?) manage to speed things up a bit. 2009 saw the emergence of several new superstars like CM Punk---a personal favorite from Ring of Honor---and Kofi Kingston, so it's good to see that they get a bit of face time. A number of tag team and championship matches are also good efforts, reminding us that major changes don't always happen on pay-per-view. Some WWE superstars get much more face time than others, of course: not only do D-Generation X (the returning tag team of HHH and Shawn Michaels, who first partnered roughly a decade earlier) and Legacy (second and third-generation superstars Randy Orton, Ted DiBiase Jr. and Cody Rhodes) dominate many of the segments, but singles athletes like John Cena and Batista are all over the card as well. It's not necessarily a bad thing, but it reminds us how much smaller the Raw roster is since the brand split several years ago.

Overall, there's more good (or at least passable) than bad, but many fans have seen everything that's taken place here---so for obvious reasons, The Best of Raw 2009 isn't for everyone. Taken for what it is, it's a passable attempt at summing up a year in the life of WWE's flagship show, so here's hoping they continue the practice.

On the technical side of things, things aren't quite as well-defined. The technical presentation of The Best of Raw 2009 is firmly below average (for reasons outlined below), which limits the appeal of this collection even more. No bonus features have been included, but that's mainly due to the format of this release. In any case, this won't be a collection you'll come back to very often, but The Best of Raw 2009 is probably worth a once-over...providing you haven't seen everything already, of course.

Though Raw---and all related WWE programming, including pay-per-views---has been broadcast in 16:9 widescreen for well over a year now, The Best of Raw 2009 is presented in 4:3 format. It's unknown why WWE has chosen to present this material in such a way, but it's practically a deal-breaker right out of the gate. Notable amounts of pixellation, edge enhancement and compression artifacts can be seen during many entrances and fast-moving sequences, which has been a long-standing problem we've undoubtedly become accustomed to. Colors are generally bold and bright, though reds pop out almost unnaturally at times. Overall, this is far from a top-tier effort, especially with the cropping taken into account.

The audio is presented in a robust Dolby 5.1 Surround mix, which does a decent job of recreating the WWE live experience. Crowd noise and play-by-play commentary come through loud and clear, creating a satisfying soundstage overall. Absent from this release, unfortunately, are two ingredients: a Spanish play-by-play track and Closed Caption support. The latter isn't exactly a surprise, but inclusion of the former would have certainly broadened the appeal of this collection. 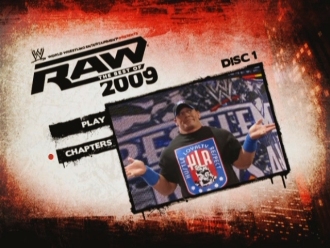 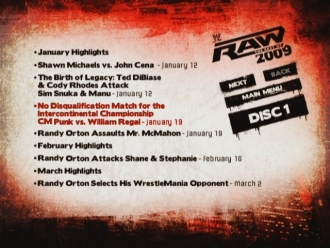 Seen above, the plain-wrap menu designs are basic and easy to navigate. Each disc has been divided into a dozen or more chapters (one per match and significant "filler" event), while no obvious layer change was detected during playback. Several WWE-related trailers and promos play before Disc 1's main menu can be accessed; annoyingly enough, two of them are not skippable. This three-disc release is housed in foldout digipak case with three separate trays; a handy insert booklet also includes the complete match/interview listing.

Bonus Features
Due to the format of this release, no bonus features have been included. Of course, there's roughly nine hours of content here, so it's not exactly a deal-breaker.
Final Thoughts

At roughly nine hours in length, The Best of Raw 2009 is a daunting, incomplete and sporadically entertaining collection of moments from WWE's flagship program. Unfortunately, the chatting far outweighs the action, which severely limits this release's replay value; after all, how many times do you want to watch the same interview? It's easy to see that this three-disc set is more of a "historical document" than anything else, but plenty of missed opportunities---and, of course, the inevitable sense of déjà vu---keep the momentum from rolling onward. WWE's technical presentation is a true deal-breaker, though: the company's programming has been broadcast in HD for well over a year now, but this release is cropped for 4:3 displays. Overall, it may be a lot to take in during your average weekend, but there's just not enough here to fully recommend a purchase. Rent It first, unless you're a rabid WWE collector.