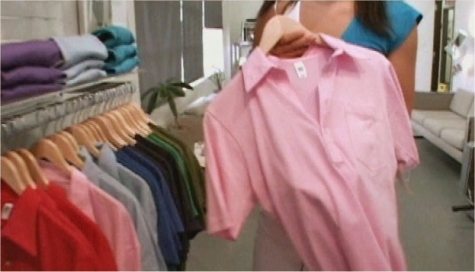 As fast-paced and efficient as its two subjects, Amie Williams' No Sweat (2006) is a thoroughly American documentary about garment production, work ethics and the changing face of industry. Our two subjects are Los Angeles-based clothing companies American Apparel (founded by Canadian entrepreneur Dov Charney in 1989) and Sweat-X (co-founded by Ben Cohen, formerly of Ben & Jerry's Ice Cream, in 2001). Though radically different in certain respects, American Apparel and Sweat-X share one common bond: they avoid the sweatshop practices that most other garment companies employ, either foreign or domestic. Filming took place between 2003-2006 and briefly focuses on Sweat-X's 2004 closing, though both companies are given time to speak their peace. Spoiler alert: one speaks much louder than the other.

Sweatshop practices aren't regularly taken into account by most shoppers; as seen during a deleted scene, most folks just look at the size and price tag. Phrases like "Made in Taiwan" or "Made in China" invoke thoughts of underpaid workers in cramped factories...but to be fair, "Made in the USA" isn't a free pass, either. Most shirts, jeans, sneakers and other articles of clothing are produced in sweatshops---again, either foreign or domestic---and hand-stitched by employees who earn pennies an hour. American Apparel and Sweat-X weren't the first companies to roundly reject such business practices, but it's certainly a major part of their business statements.

American Apparel, obviously the more successful of the two, gets the lion's share of coverage; though it's headed by an outspoken, controversial figure in Dov Charney, the company is doing extremely well and currently ranks as America's largest clothing manufacturer. Currently producing roughly a quarter-million products every day at its massive factory in downtown LA, American Apparel employs a highly efficient business model that maximizes output while claiming to keep its workers happy. On average, employees make $12 an hour---roughly 10-20 times that of your average sweatshop worker, foreign or domestic---and most are immigrants, as American Apparel has been a long-standing advocate for immigration reform. Most casual consumers primarily know the company for its racy advertisements and the numerous sexual harassment suits brought against Charney---and, as expected, No Sweat touches upon these subjects as well. In the end, though, it's obvious that Charney's business model has been extremely successful thus far---and like it or not, his company seems to be doing much more good than harm.

In contrast, Sweat-X is run in a much more traditional manner...but due to the company's short lifespan, it doesn't get nearly as much coverage during No Sweat. Like American Apparel, Sweat-X was created under the assumption that workers could be paid a fair living wage, and consumers would be willing to pay a little extra if this business practice was part of their marketing strategy. It's a reasonable enough expectation, of course: why shouldn't the treatment of a company's employees increase its chances at long-term success? Sweat-X opened its doors in 2001 with roughly $2.5 million in start-up funds...but as No Sweat reminds us, companies are rarely profitable right out of the gate. The fledgling company lost more than $800,000 during its first year of production and never recovered in the long run---and whether it was due to mismanagement or other factors, Sweat-X had good intentions that were quickly left unfulfilled. In any case, No Sweat doesn't aggressively argue for one side or another. It simply shows us two companies, alike and different in many ways, struggling to compete in a fast-paced, global marketplace.

It's also worth noting that No Sweat isn't appropriate for all audiences, mostly due to outbursts of foul language and an assortment of nude pictures (both take place within the walls of American Apparel, obviously). It is, however, an excellent and fast-paced documentary that should be seen, enjoyed and passed around. The DVD doesn't offer a great deal of support, aside from a few appropriate bonus features, though No Sweat is certainly a title worth looking into.

Presented in (what appears to be) its original 1.78:1 aspect ratio, No Sweat has not been enhanced for 16x9 displays---and that's practically unacceptable for a recent release. It also suffers from noticeable interlacing, softness and mild amounts of edge enhancement along the way, in addition to muddy black levels, blown-out whites and mild compression artifacts. Some viewers may not be bothered with these shortcomings: No Sweat is not a visually-driven film and aims for a straightforward, slice-of-life presentation style....and it appears to have been shot on low-grade digital video, so most of its problems undoubtedly stem from the source material. Still, this is below-average treatment in every regard and the film suffers for it.

The Dolby Digital 2.0 Stereo mix is also low-key and has its fair share of problems. Some of the talking-head interviews come through clearly, though other segments take place on the busy warehouse floors and often fight for attention. There's also the nagging issue of a few extraneous post-processing filters, including heavy use of flanger effects and the like. More than anything else, these filters are distracting and belong in much less compelling films. Unfortunately, no optional subtitles or Closed Captions are offered during the main feature or any of the extras. I'd have expected Spanish subtitles at the very least. 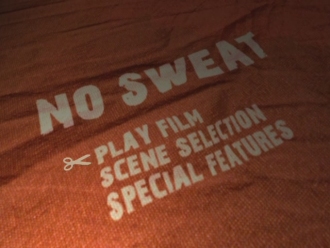 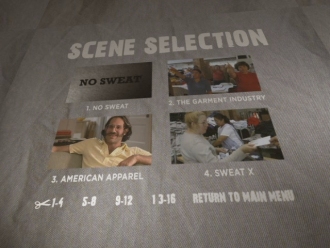 Seen above, the static menu designs are basic and easy to navigate. The 53-minute main feature has been divided into a generous 16 chapters, while no obvious layer change was detected during playback. This one-disc release is housed in a standard black keepcase and includes no inserts of any kind.

Bonus Features
Not much to pick from here, but a few extras have been added for good measure. Leading things off is an Interview With Director Amie Williams (5:36), who goes into modest detail about the film's inception, production and events that helped to shape it. Williams is candid and easy to follow, enough so that a full-length commentary would've fit in perfectly...but taken for what it is, this brief chat as a welcome addition. Also here is a pair of Deleted Scenes (2 clips, 3:17 total), entitled "UCSB Students" and "Dov with Buyers". Both are worth a look...especially the first, which focuses on a few young buyers and their shopping habits. The second obviously gives the eccentric Dov Charney more face time, which may or may not be a good thing.

Closing things out is the film's Theatrical Trailer (2:30) and a selection of Previews for other IndiePix titles. Like the main feature, these segments are presented in letterboxed format and do not include optional captions or subtitles.

Fast-paced, informative and entertaining, No Sweat is a solid documentary that explores its subjects efficiently. Both American Apparel and Sweat-X are given a fair shake, despite their drastically different approaches to manufacturing and management. The total package paints a colorful picture of the changing face of American business, and how passion and efficiency can often lead to success...but not always. This DVD package is a mixed bag, pairing a low-rent technical presentation with a few meager but appropriate extras. The price tag doesn't make it an exceptional value ($25 for roughly an hour of content), but No Sweat is too strong to ignore. Rent It for the full story; even if you're not a regular fan of documentaries, you'll be glad you did.