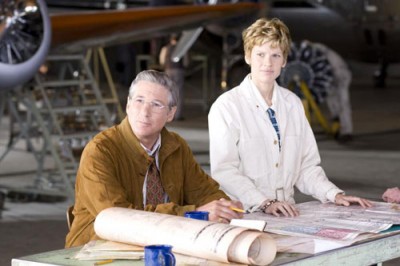 Hilary Swank seems the ideal
choice to play Amelia Earhart. She looks a lot like her and is
a supremely capable actress - besides which, Swank has made a career
out of playing decidedly singular women with masculine streaks.
Pair Swank with Mira Nair - a director of great range and visual flair
- and an able supporting cast, and the sum is a sure-fire winner,
one would hope. However, as often happens with large-scale historical
bio-pics, Amelia doesn't know what to make of its vaunted heroine,
so instead of being a searching, complex portrait, what emerges is a
rather conservative, confused, sugary soft-soaping of history weighed
down by Robert James Waller-level romance. Children who see this
movie without prior knowledge of Earhart's achievements will come
away with the impression that Amelia Earhart was a lady who tried
to fly planes but actually could not. Because not only is
the central character in this film paper-thin - she's not even likeable.

We begin at the end, with Amelia
Earhart and her navigator Fred Noonan (Christopher Eccleston) taking
off from Miami on their fateful flight around the world. Earhart's
husband and business manager George Putnam (Richard Gere) sees them
off fondly. From here, we backtrack to the beginning of Earhart's
career, when she meets Putnam and he places her on a plane flying across
the Atlantic Ocean - as a passenger. This is all for the sole
purpose of promoting Earhart as "the first woman to cross the Atlantic."
Of course, it's a sham, even though Earhart is shown taking a leadership
role in the planning and execution of the flight. From here on
out, Earhart is a media celebrity, which allows her to pursue her dreams
as a pilot. Putnam falls in love with Earhart, and persuades her
to marry him. Earhart is not, as she puts it, "the marrying
type," but she assents. Shortly thereafter, she begins an affair
with aviator and entrepreneur Gene Vidal (Ewan McGregor). Earhart
soon completes the first female (and second all-around) solo flight
across the Atlantic. Her final feat, the global flight with Noonan,
would enshrine her forever in American iconography.

The film's story is a jumbled,
muddled affair from beginning to end. Characters are one-dimensional.
Motivations alternate between simplistic and utterly obscure.
The film's most significant offense against coherent storytelling
is its inability to come to any particular conclusion about Earhart
as a character. Was she a publicity-hungry self-promoter?
Was she just a Midwestern girl trying to follow certain dreams that
went against the grain of the male-dominated world of aviation?
Was she a harlot? An opportunist? Or was she simply a plain-spoken
genuine American hero? In other words, what drove her to be the
Amelia Earhart we remember? We don't really receive any answer
to that key question in Amelia. As written, Earhart is
driven, contemplative, and occasionally contradictory. Her affair
with Vidal comes off as merely whimsical and selfish. There are
several moments in the feature when Earhart utters lines that reveal
an impulse for "freedom" as her raison d'être. Freedom
may be a powerful concept, but it is insufficient. I think it's
fair to say that most human beings desire some form of freedom.
But that word alone can't encapsulate the psychic biography of a beloved
cultural figure such as Earhart.

The entire movie rests upon
the relative strength of Earhart as a character. Since she is
such a weak lead, a lot of other stuff falls apart. The dialogue
is expository, perfunctory, and hovers at about a second-grade comprehension
level. This snowballs into unconvincing performances (Eccleston
comes out on top here as the no-nonsense drunkard Noonan), a surprisingly
syrupy score by the very able Gabriel Yared, choppy editing, and distractingly
over-lit photography.

There are a few effective sequences,
particularly the final one, as Earhart and Noonan struggle to make radio
contact with a tiny refueling station located somewhere in the vast expanse
of the Pacific. This thrilling scene reflects scripting and direction
that takes great care with the historical record, coupled with very
tight photography and editing; if these skills had been applied to the
film as a whole, the final product would have been far more compelling
than this mush.


The enhanced 2.35:1 transfer is quite good. Despite a jarringly
bright lighting scheme, the film is well-photographed. The transfer
dutifully replicates a soft color palette that contains a lot of light
blue, yellow, and pink. Blacks are quite solid.

The Dolby Digital 5.1 surround track is not particularly thoughtful;
nor is it in any way lacking the basic elements of a decent soundtrack.
It's purely middle of the road. Surrounds are used inconsistently.
The score is overly loud at a number of points. Still, dialogue
is crisp, and ambient sounds are utilized judiciously if unimaginatively.

This screener contained a few interesting supplements that add valuable
historical context regarding the real Amelia Earhart, someone likely
much more interesting than the limp character portrayed in this film.
First is a selection of Deleted Scenes (13:39) that actually
add some interesting biographical information, if not a lot of depth.

Making Amelia (23:08) is a pretty standard, hyperbolic EPK-style
piece. The Power of Amelia Earhart (10:45) features Nair
and others discussing why and how this picture was made. It's
a bit more personal in nature than the other making-of piece.
Several Movietone News segments (6:41) featuring the real Earhart
are pretty interesting.

Amelia is a pretty big
missed opportunity. High production values and excellent actors
are wasted in this expensive but simple-minded take on the life of Amelia
Earhart. A few well-done sequences reveal the promise of the filmmaking
talent gathered here. Rent it.