Discotek Media // Unrated // February 23, 2010
List Price: $19.95 [Buy now and save at Amazon]
Review by J. Doyle Wallis | posted March 1, 2010 | E-mail the Author
Be it between the extremes of exacting revenge for a criminally harmed loved one to punching a snotty barista, even the most devoted peacenik probably has some tinge of vigilantism. Its only natural. No matter how civilized we like to think we are, sometimes, there is that knee jerk wish to deal with any problem, no didactic red tape in the way, just pure reaction. And, sometimes that reaction could be violently expressed.

Ah Kin (Anthony Wong) is a good man. A bit of a milquetoast but a good man. He seems to be on the right path in life, his hard work at the insurance agency putting him in line for a promotion and at home he has a loving wife with a baby on the way. Then it all goes to Hell. Late one night, his wife has complications. They desperately try to hail a taxi, get one who decides he doesn't want a bleeding pregnant woman in his car, and the driver takes off, accidentally dragging Ah Kin's wife and unborn child to their death.

It's enough to break a man.

The film supposedly found real life inspiration from a taxi strike that lead to some bad blood between gouged customers and surly drivers. The marketing imagery of a bespeckled Anthony Wong had shades of Michael Douglas in Falling Down and it does make a brief nod to Taxi Driver's famous ‟You talkin' to me?‟ scene, but 1993's Taxi Hunter has far more akin with Death Wish. It is an HK flavored, classic exploitation drama about a man unhinged.

Now, don't let the ‟inspired by real events‟ tag fool you into thinking there is some kind of moral barometer at work. Director Herman Yau is about as concerned with social consciousness and subtext as Larry Flynt is with chastity. The man behind classics like Untold Story and Ebola Syndrome aims purely for the gut. His narrow-focused hero has a screw loose, and the victim cabbies are painted as an uncivil lot. Yau assembles a colorful supporting cast with key roles going to Rong Guang Yu as a hard-nosed cop and friend of Ah Kin and Ng Man Tat as his comic relief partner with a penchant for American sports apparel. Its a simple exploitation number, but Yau paces and structures the film perfectly, using the first third as setup and the remaining running time to weave a winningly seedy downward spiral.

Taxi Hunter is a fine example of The Anthony Wong Show, a great character actor getting plenty of leeway and screentime to flex his chops. Ah Kin does not come out of the gate as a murder machine. Initially, his attack on a cab driver is improvised with what's at hand, trying to strangle the driver with the safety belt, clubbing him with the change dispenser, before failing and resulting in Ah Kin being beat up. He is then just one training montage, and gun purchase, away from becoming a killer. Even then, Wong plays it low key. Wong's Ah Kin is still that unassuming salesman and he keeps his calm voice and demeanor of a choir teacher right before plugging a few bullets into his prey. 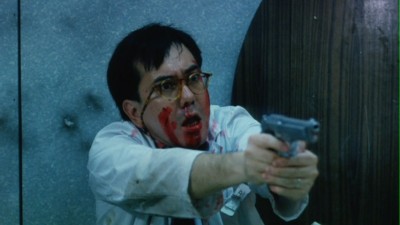 All HK cult film fans are continually haunted by the cash-in and throw them away quality pinned to films by the past HK market. So, bearing that in mind, this transfer isn't absolutely perfect but definitely acceptable given the medium and the hurdles of giving some TLC to neglected films. The color and contrast details are solid, nice bible blacks and some vibrant hues. On the sharpness front, the image is quite soft and often muddy. Likewise, the print continuously has some wear (of the white spot variety) and occasional jitters.

Audio features a basic 2.0 Cantonese track with optional English subtitles. Simple stuff, the norm for the era like the one-dimensional synth score. Scenes are largely post-dubbed so there is always a canny quality to the dialogue. Subtitles are mostly well-timed and translated but a few misspellings popped up, like "hear" instead of "here" and "your" instead of "you're."

Sadly, the only significant extra is a trailer.

Black-humored and black-hearted, Taxi Hunter is one of the better examples of Hong Kong's wild, pulp, cult film salad days. Maybe Discotek just set the bar too high with their other Herman Yau/Anthony Wong release Ebola Syndrome, an excellent transfer with a nice gaggle of extras. Taxi Hunter just gets the no fuss no muss basics, a real shame since I think it is the better exploitation collaboration between the two. Fans will want to seek it out as a purchase. The rest should opt for a rental.