Tales from the Script 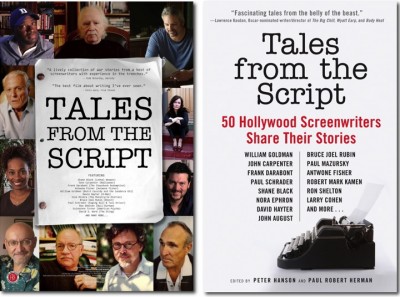 Tales from the Script
is documentary that consists solely of interviews with prominent (and
a couple of not-so-prominent) screenwriters exploring the triumphs and
tragedies of being a writer in Hollywood. The interviewees'
comments are cut together in thematic groups that cover everything from
making a pitch to working with superstars to the role of the writer
on a film set. This compendium of anecdotes and insight is an
excellent record of the writer's perspective on the film production
process, and will be an invaluable document for those considering any
kind of career in the movies.

Almost each and every interviewee
in this documentary talks about the positive and the negative - the
dark and the light in screenwriting. Their experiences have almost
all been roller-coaster rides - and we're talking about some of
the most successful writers in the business. This was the most
surprising thing I learned from the documentary: that all of these writers
have had markedly similar experiences - although well-paid and having
a relatively good time, they all must confront the insurmountable frustrations
of studio executives, their "ideas," and the vast unpredictability
of the studios' decision-making process.

William Goldman expounds upon
his theory that, in the film business, no one really knows anything.
Paul Schrader explains why his Dutch Calvinism has gelled so well with
Martin Scorsese's Italian Catholicism. Ron Shelton claims that
all of his screenplays derive from his own personal background and interests.
Shane Black talks about early successes (Lethal
Weapon, etc.)
that left him blocked for several years thereafter. David Hayter
explains how he essentially fell into screenwriting while working on X-Men. Guinevere Turner pulls no punches
discussing Uwe Boll's hijacking of her screenplay for Bloodrayne; on that project, Turner wrote only
a single draft before it was accepted, heavily modified, and shot by
Boll.

Although there is much to glean
from the documentary, especially for those interested in pursuing a
writing career, several of the interviewees (particularly Carpenter
and Goldman) are adamant about the unpredictability of it all - that
there are no hard and fast rules and that the ground is constantly shifting
beneath a writer's feet. A need to stay agile, motivated, and
informed seems to be one of the few substantial "rules" for Hollywood
writers - and a key to maintaining one's creativity and sanity.

Tales from the Script
was a parallel film and book project (see the above image), and First Run Features generously
sent a copy of the book along with the DVD screener. The book
is more thorough than the film, running about 350 pages. But the
whole is a straightforward, well-organized set of material. The
film alone is alternately inspiring and discouraging, although the discouraging
parts grow out of a sense of realism rather than being merely depressing.

Sadly, the image of this brand-new documentary is presented in a
non-enhanced, letterboxed transfer - a baffling choice given where
we are now in terms of audio-visual technology, and the preferred aspect
ratio of 1.78:1. The film was shot in that shape, but is presented
here full-screen and letterboxed. As you might expect, the transfer
is far from perfect. Although bright and generally sharp, there's
a fair amount of noise and some pixilation here and there.

The stereo soundtrack gets the job done. We don't look to
interview-based documentaries for dynamic audio mixes, and this one
is no exception. However, I don't have any complaints about
what is present here. Dialogue is always clear.

There are a few decent bonus features on the disc. More
Tales from the Script is 47 minutes of deleted scenes, most of which
are just as interesting as the footage that made the final cut.
The Gospel According to Bill is a 12-minute profile of William Goldman,
the hilarious Oscar the Grouch of filmdom. (If you like this documentary,
you will adore Goldman's two indispensible books on screenwriting:

Adventures in the Screen Trade and Which Lie Did I Tell?)
Finally, Advice for New Screenwriters is a 9-minute compilation
of comments directed at beginning writers.

Of great interest to writers and film buffs, Tales from the
Script is an excellent documentary highlighting some of the most
important and unsung participants in the filmmaking process. Jam-packed
with fantastic stories and perspectives, it's an important addition
to any cineaste's film library. Highly recommended.