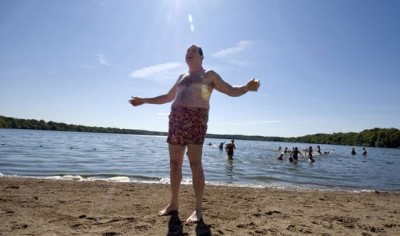 A Serious Man is the
Coen brothers' fourteenth feature film. It is a new treatment
of themes that have characterized much of their work. The thematic
material I'm referring to is difficult to describe, because the Coens
embrace the ambiguous and avoid the didactic. The Coens' dark
and often pessimistic worldview has something in common with that usually
ascribed to Stanley Kubrick, although the Coens' humor and style -
among other things - make their work distinct from Kubrick's and
everyone else's. A Serious Man takes these pet themes
- many of which show up in different forms in their Oscar-winning

No Country for Old Men, and other Coen films - and re-casts them
in a new milieu, shedding light on certain things having to do with
inevitability, fate, suburbia, and personal integrity. The Minnesota
natives, in a way, seem to be providing an "answer" of sorts to
that other storytelling son of their home state, Garrison Keillor.
Whereas Keillor's witty, nostalgic homilies are fond and generous,
the Coens' film is a metaphysical mailbomb disguised as a love letter.

After a short, fable-like pre-credits
sequence in an unnamed 19th century European shtetl,
we are introduced to Larry Gopnik (Michael Stuhlbarg), who lives, circa
1967, in the suburbs of the Twin Cities. Gopnik teaches college
physics, and is currently being considered for a tenured position.
But his stable middle-class life quickly begins to unravel. His
wife asks for a divorce - a ritual Jewish divorce no less - so she
can marry the fatuous Sy Abelman (Fred Melamed). One of Gopnik's
students tries to bribe, and subsequently blackmail, him. His
brother Arthur (Richard Kind) has been sleeping on Larry's couch for
a year, writing a numerological work called The Mentaculus.
As things pile up, Larry searches for meaning and wisdom from a series
of rabbis, none of whom provide him with any particular insight.
It becomes increasingly clear to Larry that he must take some sort of
action to assert his own will over the direction of his life.
When Gopnik finally gathers the courage to make such a decision, it
turns out to be one that foolishly tempts fate.

As with most Coen films, we
find ourselves in a carefully arranged and somewhat hermetically sealed
world. The photography and set design are fussy, stylish, and
appealing. Gopnik's milieu is well-ordered, predictable suburbia.
He is, in many ways, living the American dream. Facing an onslaught
of personal and professional challenges, he finds that he must answer
to himself - to explain to himself the increasingly chaotic circumstances
that crop up around him. We see that Larry's experience of the
American dream doesn't usually require such self-reflection - intellectualization
was never a part of the equation, not even for a professor of physics.
Larry is therefore stranded amid the crumbling ruins of his life, clueless
as to why this is all happening to him.

The Coens deliver sharp rebukes
here about the lack of introspection in everyday American life.
Gopnik, in his attempt to seek the ancient wisdom guarded by his rabbis,
is stonewalled. The first is a young man only capable of drawing
metaphors around a parking lot, and the second tells a tantalizing story
that ends without obvious meaning or significance. Gopnik is alone,
alone, alone.

Things seem irretrievably disastrous,
when, in the movie's penultimate scene, Gopnik has a piece of good
news. This gives him a jolt of something like confidence, and
he proceeds to make a fateful decision. Then, immediately thereafter,
he receives a phone call from his doctor, who asks him to come in and
review some X-rays. At the same moment, Gopnik's son and his
class are taken from the classroom toward his school's storm shelter,
as an enormous tornado rushes through the Twin Cities.

There is something powerful
here about tempting fate, and the unutterably complex ramifications
of seemingly simple actions. The Coen brothers get at these things
obliquely enough, always maintaining an artful distance - and the
space between is filled with loving design, oddball characters (performed
extremely well by a diverse cast), memorable humor, and sustained, growing
tension. It's a film that invites discussion and interpretation,
while striking a sonorous and nervous-making chord in the quiet heart
of American life.


Focus Features presents A Serious Man in an enhanced 1.78:1
transfer that looks outstanding. The film's beautiful photography
by frequent Coen collaborator Roger Deakins sparkles. Blacks are
rock-solid. The 1960s-flavored set design and costumes brim with
detail. The image is outstanding.

As with most Coen brothers films, the soundtrack is extremely important
and boasts a very broad dynamic range. The Dolby Digital 5.1 surround
track is excellent, with music and sound effects used boldly and often.
In fact, Carter Burwell's score is used as a sound effect as often
as it is purely melodious. Ambient effects are plentiful across
the active soundstage. It's a very engaging track.

(17:04) is a behind-the-scenes featurette that includes a fair amount
of discussion by the Coens themselves as to the origins of the film's
story and their experience making the film. Creating 1967
(13:43) covers the selection of the film's location and the extensive
design work that went into the period sets, costumes, props, and décor.
Hebrew and Yiddish for Goys (2:14) is a short piece that explains
the uses of those two languages in the film.

A
Serious Man is another challenging, memorable film from the Coen
brothers - one that invites and rewards multiple viewings. Deep-set
themes are elucidated carefully and with great humor. Excellent
performances help carry another Coen catalog of life's many strangenesses
and the bizarre logic of their existence. Only the lack of substantive
bonus content prevents me from awarding this film DVD Talk's highest
rating. Highly recommended.