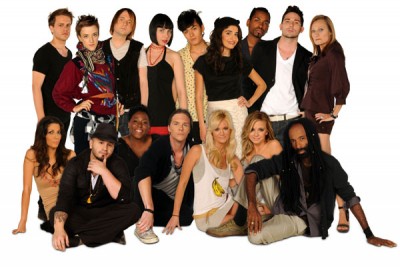 In my review of Project
Runway: Season Five, I had an opportunity to enumerate the reasons
why I enjoy the program so much more than other reality shows.
Project Runway provides a legitimate forum for creative thinkers
to make original work in a charged but realistically challenging environment
- instead of being an excuse for auto-humiliation on a grand scale.
With Season Six, the show retains its basic strengths, but a move from
New York to Los Angeles proves detrimental to the integrity of the competitive
aspect of the program.

I don't want to make a big
huge "coast vs. coast" argument here, but New York is without a
doubt the center of fashion in the United States, if not the world.
For Season Six, the producers moved Project Runway to Los Angeles,
for reasons that I've not been able to fully divine. It's
possible that production costs were lower in LA than in New York, but
I'm just making a guess. Whatever the reasons, Project Runway
doesn't feel right in Los Angeles. For one thing, the contestant
designers are still vying for the same grand prize: a runway show at
Bryant Park during Fashion Week. So the setting is now oddly removed
from the locale of the designers' goal. For another thing, although
there have been and continue to be successful designers who come from
and are based in Los Angeles, New York just feels like a more
inspiring place for fashion design. Beyond that, New Yorkers are
generally better dressed than Angelenos (painful, I know, but true),
which further brings home the sense of disconnection between the show's
object and its setting.

Season Six starts with a group
of sixteen new designers who come from all over the country, cover a
wide range of ages, and whose backgrounds and experiences vary wildly.
Equally varied are their personalities, although in this season, there
seemed to have been a smoother feeling of camaraderie among the designers
than in previous years. There's not a whole lot of interpersonal
drama; although it's interesting to note that, as in Season Five,
the winner of Season Six is not a terribly likable person. Then
again, there's something to be said for staying focused and single-minded
in the process of making creative work, even if the price is pushing
people away.

The sixteen designers move into their quarters at the Fashion Institute
of Design and Merchandising in downtown LA. Their challenge is
to create a gown for a red carpet event.

Designers are challenged to create a maternity look for guest judge
Rebecca Romijn.

Episode 3:
"Rumble on the Runway"

Episode 4:
"What a Woman Wants"

In an old standby, the designers must create a look with their models
serving as "clients."

After a trip to the headquarters of the Los Angeles Times,
designers are challenged to make an outfit from newspaper.

In another team challenge, designers made two garments, both blue
in color, appropriate for Macy's line.

Episode 10:
"Around the World in Two Days"


Designers are challenged by Michael Kors to create a look inspired
by particular global locales.

The six remaining designers must create a companion piece for their
earlier, challenge-winning looks.

Episode 12: "The Design of Fashion"

A trip to the Getty Center provides the basis for the designers'
final challenge - a look that draws inspiration from the Getty's
grounds or artworks.

The final three return to their
homes with $9,000 in funds to design their 12-piece line for Bryant
Park.

The final three meet in New York for Fashion Week and their big
runway show at Bryant Park.

For many, Heidi Klum personifies
the show, and her combination of chirpy charm and Germanic austerity
makes her an able host. But mentor Tim Gunn is the real heart
of Project Runway. Gunn's paternally furrowed brow and
honest, constructive advice keeps the designers focused and true to
their respective visions. Gunn strives to instill confidence and
elicit authentic individual expression - which is the best that any
teacher of a creative art can do.

Season Six's move to Los
Angeles entailed one key consequence that hurts the program's consistency.
The relocation meant that regular judges Michael Kors and Nina Garcia
were absent from most episodes. In their place we get a parade
of guest judges who range from the interesting and qualified (Milla
Jovovich, Bob Mackie) to the bafflingly irrelevant (Lindsay Lohan, the
awful Jennifer Rade). This inconsistency is extremely detrimental
to the designers; not only are they deprived of sharp, insightful critiques
from the dependable Kors and Garcia, but they are also forced to endure
a gauntlet of random, disconnected remarks from people wholly unfamiliar
with their work. Each episode is thus rendered a one-off, with
uninformed judges making uninformed decisions that result in an unfair
succession of eliminations. Although the final three are each
fully deserving, the season progresses illogically, with excellent designers
being eliminated too early and less talented ones surviving until the
final pre-Bryant Park challenge.

The full-screen transfer looks
a bit better than Season Five. Saturation isn't as big a problem.
Colors look more natural and balanced. Things get a little contrasty
at times, but that's the look of the show. It's a good transfer
that is free of egregious digital errors.

The main audio track is a strong Dolby Digital 2.0 mix. Music is
favored, and plays almost constantly throughout each episode. Dialogue
is well-represented, although moments that are lost in the mix or were
whispered too low for the microphones to pick up are helpfully subtitled.

Project Runway: Season Six
doesn't feel quite right in LA, and the loss of regular participation
by judges Michael Kors and Nina Garcia robs the show of the consistency
of its essential designer critiques. It's still very watchable
television. Recommended.