Second Run // Unrated // May 1, 2006 // Region 0 // PAL
List Price: £12.99 [Buy now and save at Amazon]
Review by Chris Neilson | posted January 9, 2010 | E-mail the Author
While Apichatpong Weerasethakul may never become a household name, it's one that's become well recognized among cinephiles, even if most can't pronounce it. The 39-year-old Thai writer, director, and producer of indie art films, who goes by Joe and is a graduate of the Chicago Art Institute, has completed five feature films and more than two dozen shorts to date. A darling of the festival circuit, Weerasethakul has earned numerous accolades, most notably the Jury Prize at Cannes in 2004 for Tropical Malady (Sud pralad), and Cannes' award for young talent, the Prize Un Certain Regard for Blissfully Yours (Sud senaeha) in 2002.

Blissfully Yours, Weerasethakul's second feature film, was the first to receive a limited theatrical release throughout much of western Europe and North America, before eventually receiving DVD distribution from labels in the United States, France, Germany and Great Britain. This review, albeit less than timely, is of the 2006 release by the British boutique label Second Run.

Using a cast of non-professional actors, Blissfully Yours is a two-act naturalist film set during a single day in the life of a trio of characters. The characters are ordinary and the events are inconsequential and often unfold in near real-time, yet there's something entrancing in the telling.

Without prologue or even credits, Blissfully Yours opens in medias res in a doctor's office. Min (Min Oo), a seemingly mute young man with septic skin lesions is being examined by a doctor, while his two hovering female companions attempt to persuade the doctor to provide Min with a health certificate, a requirement for lawful employment in Thailand. Over the course of the first act which consumes 45 minutes of the film's 122 minute runtime, we learn that Min is an undocumented immigrant from Burma, and that the young woman, Roong (Kanakporn Tongaram), is paying the older woman, Orn (Jenjira Jansuda), to illicitly get Min the documents he needs to live and work in Thailand. Their efforts to con a health certificate without proof of citizenship frustrated, Roong and Min drive into the countryside for a picnic in the forest. Here ends the film's first act as the title credits finally roll. 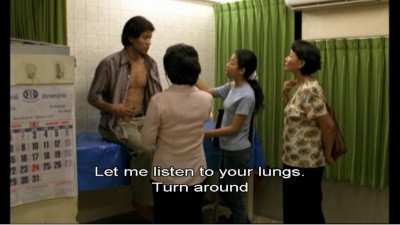 Though not much happens in the first 45 minutes of Blissfully Yours that could pass for conventional narrative, there's even less in the 77-minute second act. After a lengthy driving sequence, Roong and Min park and stroll into the woods. They eat lunch, pick berries, and suffer ants before Roong performs oral sex on Min along a creek bank. As free of eroticism as this sex scene is for the audience, it's titillating compared to the charmless sex of Orn and her boyfriend who've followed Min and Roong to the forest. After a lengthy copulation scene Orn is left alone when her boyfriend chases after an unseen thief attempting to steal their moped. Orn thereafter becomes the third wheel and near silent observer to Roong's further seduction of the lackadaisical Min. 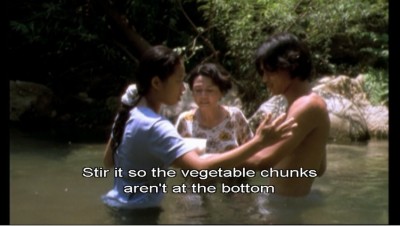 Though Blissfully Yours fails by any measure as compelling conventional narrative, there's something enchanting in the way that Weerasethakul and cinematographer Sayombhu Mukdeeprom capture the ephemeral nature of a slow summer afternoon in the woods. Though this trio are physically joined (sometimes literally), there's also a pervasive sense of isolation that grips each of them. Roong and Orn want nothing more than to love and be loved, while Min remains emotionally remote.

Presentation
Blissfully yours has been released from the UK-based boutique DVD label Second Run on a single dual-layered DVD which is PAL-encoded but not region restricted.

Video & Audio:
This director-approved transfer is presented in anamorphic widescreen (1.66:1), unfortunately the image is interlaced, soft, and suffers from minor print damage.

The 2.0 DD Thai and Burmese mix sounds acceptable with no noticeable dropouts or distortions, and the optional English subtitles are excellent.

Extras:
Extras consist of a 12-page booklet featuring an essay by critic Tony Rayns, and an eight-minute video introduction by Weerasethakul with atrocious sound. 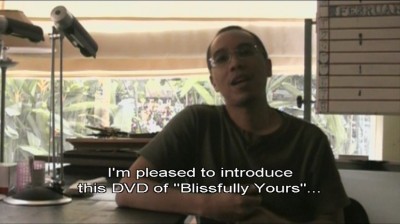 Final Thoughts:
Tropical Malady with its supernatural dangers would make for a better introduction to Weerasethakul's work than Blissfully Yours, but for fans of this exceptional filmmaker's work, Blissfully Yours is recommended.