One doesn't pop a movie titled simply, "Ninja" in their DVD player expecting high art. Ninjas were a popular b-movie staple in the 80s, becoming synonymous with the leading name in b-movies, The Cannon Group. The most memorable entries in the ninja genre either featured Sho Kosugi or Michael Dudikoff, whose ninja films are remembered for far different reasons than the formers. 2009 was looking to be a very notable year for fans of ninjas; Storm Shadow and Snake Eyes were shaping up to be the only good part of the "GI Joe" movie, "V for Vendetta" director James McTeigue was helming a $60million dollar ninja epic titled "Ninja Assassin", and a direct to DVD film titled, "Ninja" was looking to be a return to b-movie roots of 80s, only with much more skilled leads.


Now, in 2010, the last of these movies has finally made it's way to fans of the black clad assassins; unfortunately, there's a good reason "Ninja" has taken so long to see the light of day. Ninja purists chastised "Ninja Assassin" for it's extreme reliance on CGI, finding it hard to look past the digital bloodbath and remember they were watching a ninja movie. While I fully admit I enjoyed "Ninja Assassin" I did have some high hopes for "Ninja" despite all the sign of never aspiring to be more than a b-movie. What I didn't expect as an hour and a half, c-rate film with CGI so atrocious, that you might ask yourself if this is a movie made in 1999, rather than 2009. 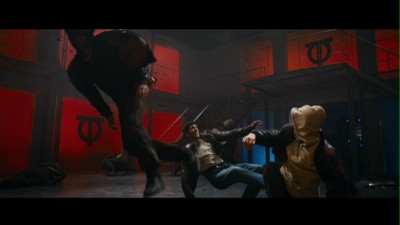 Scott Adkins steps into the title role as Casey, the classic white martial artist studying in an all Asian school, he's a man of few words with a mysterious past (a plot point which is built up, but goes nowhere). Casey shows extreme proficiency in martial arts, earning the favor of his sensei and his daughter, while naturally, stirring jealousy in the heart of his arrogant rival, Masazuka. The sensei doesn't help matters by announcing he needs to pick a successor to guard the secrets of ninjitsu, which apparently consist of an old box full of ninja weapons. If you're wondering whether there is a showdown between the two rivals, with Masazuka disgracing himself in the eyes of his master, then rest assured, you won't be let down.


To call "Ninja" predictable is the understatement of the decade. Before the opening credits were wrapped, I was making predictions of what was to come and sure enough, I hit every nail on the head. If you're familiar with this type of film, whether it involves ninjas, generic martial artists, or even gunslingers, you'll be able to make these predictions to. "Ninja" could easily be watched with the sound muted, the plot is very obvious both in terms of how tired the story is as well as how deliberate everything is filmed. Director Isaac Florentine approached the affair competently, but never aspires to be more than an average b-movie. Where he goes horribly wrong is by employing some of the worst CGI I've ever witnessed. 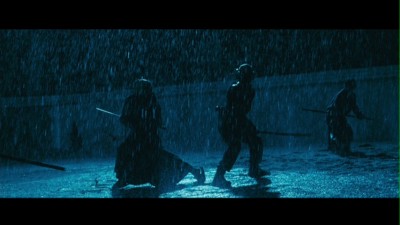 Trust me, it's bad, on par with "The Langoliers." In hopes of satisfying fans with ninja bloodshed, the makers have sacrificed scaling back the scope of the action and delivering high quality gore and action, for a high body count that looks like it comes from a Playstation 2 game's cut scenes. You get CGI swords going through bodies and poorly rendered CGI blood with a contrast level two levels higher than the live action footage. It's very distracting and kneecaps the impact of any of the film's action scenes a considerable amount. I'd much rather have seen half the action sequences if it meant classic physical effects.


In addition to the poor CGI, some of the action scenes appear to digitally assist the actors, most notably during the final, full out ninja showdown. Adkins proves he has some serious martial arts skills earlier in the film, the highlight being a crowded fight on board a subway car. He's left to shine all on his own here and for a moment I was able to put the boring CGI slayings committed by Masazuka out of my mind. To see him cheaply forced into using wires and/or digital doubles once he finally squares off against his rival, is a real downer. 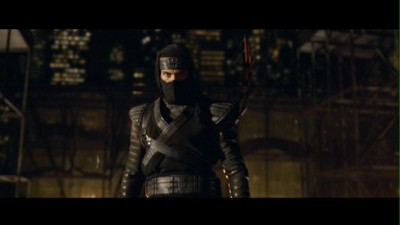 People aren't shelling out money for an award worthy plot and given Adkins' limited acting range, the only hope they have for being entertained is the action. "Ninja" should have been a slam dunk, instead, it embarrassingly trips over it's own feet trying to jump. Even Tsuyoshi Ihara (who was quite good in "Letters from Iwo Jima") turns in a very flat performance as the antagonist, flip flopping between general apathy and amateur rage. If the CGI wasn't enough to disappoint audiences, than the other critical stumble, in the form of Mika Hijii as a shrill, thoroughly annoying, and wholly inept female ninja is enough to make anyone wish they had spent their time and money on a Michael Dudikoff movie. Her acting skills are, in the kindest terms, lacking, which is saying a lot when most of scenes are played opposite Adkins.


While "Ninja" may be a very sub-par piece of entertainment, the transfer for this straight-to-DVD feature is quite striking. Contrast levels are strong, an important factor for a movie where some major set pieces take place in dark environments. I will note, one early action sequence does vary widly in quality, with some instances of somewhat washed out colors and wonky contrast, but I would chalk it up to the heavy reliance on CGI, as what preceeded and fllowed the most heavy use of CGI looked more on par with the rest of the film. Detail levels are in the medium range, while colors are faithfully rendered from the serene opening act in the dojo (a lot of cool, sharp colors) to the grimy city scenes, that make up the remaining two acts of the film.


The English 5.1 surround track was not as sharp as the transfer, featuring vocal levels that were a tad too high, making me wonder if it was a mixing error or just bad ADR work. The track isn't that memorable, but serves its purpose for the film's action oriented basis. I wish the whole package had a little more kick to it, but all in all, it was competent. English and Spanish subtitles are included as well.

The bottom line is "Ninja" doesn't deliver the goods. It's a sad, below-average, disposable film, that doesn't even have some of the unintentional humor that made the worst Cannon ninja films memorable. It's not a b-movie, it's a c-minus movie. Ninja fans, "Ninja" is a mild rental at best, but not before checking out "GI Joe" or "Ninja Assassin" first. Everyone else can Skip It.