IMAX: Mummies - Secrets of the Pharaohs 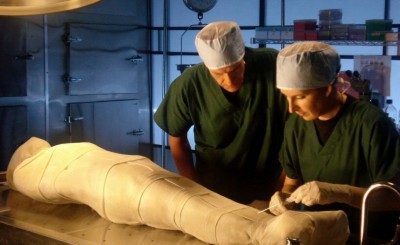 I am a sucker when the subject
is ancient Egypt. Whether it's a low-polish documentary or a
big-budget extravaganza, if the setting is ancient Egypt, I'm easier
than a carny's mark. So I was more than happy to take forty
minutes out of my day to peruse this recent hybrid documentary, originally
exhibited on IMAX screens. Mummies: Secrets of the Pharaohs
combines newly-shot documentary footage with fairly elaborate recreations,
all of it narrated by the unimpeachable Christopher Lee. The short
film takes as its subject matter how mummies were made, how and when
they were re-discovered by Western societies, and what medical secrets
they may hold for us and future generations.

Lee guides us through briskly
through the aspects of ancient Egyptian culture and religion that gave
rise to the preservation of dead bodies; they believed that bodies traveled
along with souls to the underworld, hence the need to keep them intact
after death. Prior to the age of the pyramids, the dry desert
air preserved bodies naturally. But once pyramids and tombs became
the burial chambers of choice, natron and other substances were necessary
to preserve the dead artificially.

Voice-overs by Egyptologists
continue the story in tandem with Lee's narration, describing the
discovery of mummies in the modern era, and how the successful extraction
of their DNA may provide us with important information on diseases that
killed the ancient Egyptians. Knowing this will allow us to trace
the development of a disease like malaria from ancient times to modern,
aiding contemporary prevention and vaccination.

Throughout the film, we see
a combination of new footage (including scenes of current excavation
and research) and semi-dramatized recreations. These are executed
without dialogue, which is a wise choice. (The History Channel
loves indulging in these half-hearted attempts to "enliven" their
sloppy documentaries.) I usually roll my eyes when a purported
documentary takes the easy way out with these kinds of scenes, but in
Mummies: Secrets of the Pharaohs, the recreations look good and
seem relatively realistic. There is a lack of unnecessary theatrics,
despite the visually lavish combination of sets, costumes, and CGI work.

Although the IMAX format always
emphasizes the visual, there is more than enough interesting information
about ancient Egyptian customs to maintain the average viewer's interest,
even though I would have preferred something with a bit more depth.
Mummies: Secrets of the Pharaohs is an involving introduction to
a strange slice of world history that continues to maintain its macabre,
mystical allure thousands of years after the fact.

Shot in the IMAX format with a native aspect ratio of 1.44:1, the
image has been cropped at the top and bottom to create a widescreen
1.78:1 transfer for DVD. As far as the compositions go, the filmmakers
must have had this aspect ratio in mind as they were shooting, because
the framing looks absolutely natural. There is no sense that we
are missing anything. The transfer itself boasts rich, saturated
colors and deep blacks with no evidence of artifacts.

The Dolby Digital 5.1 surround soundtrack features good separation,
with a strong musical score by Sam Cardon. The surrounds are used
more for ambience than for big punchy effects. It's a well-balanced
track, available in English, Spanish, and French.

>There is one key feature, a
22-minute making-of featurette, which provides some interesting
insights into the creation of an IMAX film. There is also some
background on how research was done with the involvement of Egyptologists
and other experts. There's also a kid-oriented quiz and some
text-based information on Egyptian pharaohs who left mummies behind.

Mummies: Secrets of the
Pharaohs is short and edifying trip, especially for those who don't
know much about ancient Egypt. It's also visually involving,
even on home video. Because of its brief length and lack of replay
value, I'd only recommend this otherwise well-made film as a rental.
Rent it.