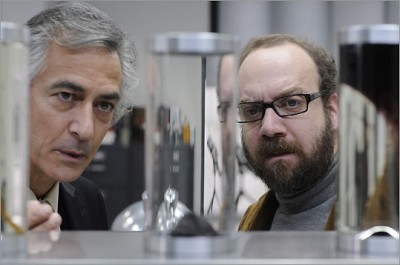 Cold Souls is the first
feature film by writer and director Sophie Barthes, and it certainly
left me feeling chilly. It's a meandering quasi-comedy with
a fun gimmick at the heart of its story. However, the plot never
really develops in a substantive way, rendering themes and motivations
impenetrable and opaque. The gimmick, therefore, remains a static
McGuffin, and by the time the film ends, it's not really clear what
has happened or why.

Paul Giamatti plays a fictionalized
version of himself. Not a happy man, Giamatti is struggling with
the lead role in a production of Chekov's Uncle Vanya.
The play is about to open and Giamatti can't get a handle on the character.
An article in the New Yorker
seems to hold the answer to his problems. It's a profile of
an emerging company that offers "soul storage." Giamatti meets
with the company's head, Dr. Flintstein (David Strathairn) who enthusiastically
encourages him to partake of the company's services. After parting
with his soul, Giamatti feels empty, which he then backfills with the
soul of a Russian poet - a woman who sold it on the international
black market. When this, too, fails to satisfy his existential
crisis, Giamatti asks Flintstein for his own soul back, but it has disappeared
- stolen by a Russian woman named Nina (Dina Korzun) for her boss's
wife back in St. Petersburg. Giamatti follows the trail of the
soul traffickers, looking for his soul.

It sounds like something Charlie
Kaufman might have come up with, but Cold Souls is devoid of
the inventiveness and wit Kaufman is known for. The movie plays
out in an odd, detached, antiseptic way, with no rising or falling story
or character arcs - just a bland clean flatness. Giamatti is,
as always, excellent, and his performance improves upon the dry script.
Cold Souls should have been a comedy - it was marketed that way,
and it is tonally a comedy in many ways - yet it is played completely
straight and the script contains no real humor.

In addition to Giamatti, Russian
actress Dina Korzun provides a good performance as Nina, a "mule"
for black market souls who was responsible for stealing Giamatti's
and transporting it to St. Petersburg. Her portrayal captures
a certain uneasy ambivalence about the nature of her job and the cavalier
treatment of souls, both by Dr. Flintstein's company and by her trafficker
bosses.

None of the rich and interesting
thematic material that might grow from such fertile soil - souls as
physical and even commercial objects - is ever developed beyond mere
suggestion. The consequences of Giamatti's soul's removal
and transference are vague at best; he feels bored, detached, mildly
ill, but never explicitly "different." What are we to draw
from this? Likewise, Nina's feelings about the business she
is a part of are transmitted by the actress's facial expressions,
but hardly by her dialogue or the movement of the plot. Her valiant
performance beats the odds; it's affecting despite being under-written.

Writer and director Barthes
- who was provided rather lavish talent and resources for her first
feature - has created a world that is well designed and skillfully
shot, but devoid of any real, ahem, soul. The film rests
solely upon a gimmick that is played out well beyond the limits of its
charm. Despite achieving a certain mood of drifting melancholy
and solid, thoughtful performances, Cold Souls is an aimless
bore.

For once, Fox has sent out a finished disc instead of a watermarked
screener! Cheers to that! And cheers to the enhanced 1.85:1
transfer, too, which is crisp and showcases the movie's nice production
design by Beth Mickle - particularly the offices of Dr. Flintstein
and the soul extractor machine. The photography by Andrij Parekh
is wonderful, particularly in the way it captures St. Petersburg locations
in the dead of winter. Blacks are pretty solid, and there are
no egregious instances of artifacting.

An unspectacular but even Dolby Digital 5.1 surround track is the
main mix. Occasional ambient surrounds enliven the track, but
overall the film takes a quiet, minimalist approach to sound.

All we have is a few Deleted Scenes that don't add up to much,
and a three-minute look at the design and construction of the soul extractor.

Any film that leans too hard on a central gimmick is treading water
from the get-go. Crisp, inventive performances from Giamatti and
Korzun prevent Cold Souls from being a flat-out failure.
Even so, I can only provide a marginal recommendation to rent it.