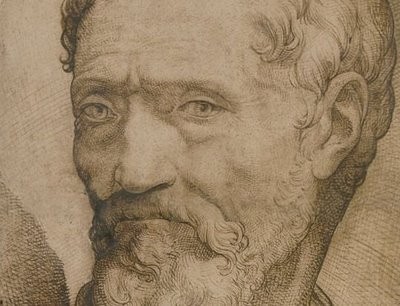 Like the best documentaries,
Robert Snyder's Michelangelo: Self-Portrait is simultaneously
entertaining, enriching, and inspiring. Simple in concept, but
complex in its editorial approach, Snyder's film is narrated through
the artist's own words, taken from diaries, letters, and early biographers,
and accompanied by images of his work. The result is a stirring
and unique film biography, one that is devoid of narrative cheats and
artifice.

We begin with Michelangelo's
voice in a letter to the great biographer Giorgio Vasari; the artist
complains of his various ailments and describes a new pietà he has
begun (the Rondanini Pietà). From here, the narration consists
of more or less chronological biographical information in "flashback"
form, as Michelangelo regales us with tales from his early life, his
first works, and his imbroglios with authority - particularly the
painting of the Sistine Chapel.
Michelangelo: Self-Portrait is grounded in the artist's own time
and own words; we see him as an artist and a man, assessing his own
work with honest criticism and equally fair egotism. He is not
a monolithic cultural figure here - he's a man driven to make art,
in his own way, and often at great personal risk. Immune to criticism
now, that was hardly the case during his lifetime.

The most compelling aspect
of this documentary is not the biographical detail, per se, nor the
beautifully photographed works of art on display here; the most revealing
content comes from Michelangelo's discussion of the sense of investment
he had in his art - the passion he felt, as well as the highly personal
details present in almost every work he made. In a post-Impressionist
world, it's too easy for modern audiences to shrug off Renaissance
artists as hired guns, working for the authority figures of the era,
whether they were Church officials or the nobility. We are quick
to allow for supreme technical proficiency, but just as quick to ignore
the soul of their work. The more overtly expressive art of the
last century is easier to attribute (or impose) emotional significance.
Here, Snyder gets at Michelangelo's own assessment of his work, as
well as the intense connection he felt to it. In particular, the
physicality of sculpture seems to have engendered a stronger bond between
artist and material than with frescos and other painting. Michelangelo
speaks of growing up around quarries and the intimacy with which he
understood the manipulation of stone. Just as the artist's mind
is often ignored, the craft of art-making is undervalued today; we tend
to place a higher value on "expression," even though it's wholly
subjective and impossible to measure.

This is a carefully-constructed
film, and an enormous amount of time was spent shaping the script and
selecting the imagery. Snyder's camera is patient and loving
when photographing the Michelangelo's work, and his approach to editing
is fluid and informative, always cutting or dissolving to images that
dovetail appropriately with the narration. The narrator, interestingly,
is not credited; I would assume it's Snyder himself. Music is
almost contemporaneous (Monteverdi and Frescobaldi), and quotations
from Dante are judiciously included.

Snyder's film is a great
work of art itself: a documentary that reveals a man whose life and
mind have been clouded by the vast scope of his artistic achievement.
But ultimately, he was someone with his own share of triumphs and tragedies,
very much a human being, and Snyder finds a way to access Michelangelo's
humanity from across the centuries, in spite of his legendary status.

The full-screen image appears to replicate the film's original
aspect ratio. (I haven't been able to confirm the OAR, but compositions don't look cropped.) This 1989 feature doesn't look like it has
been restored or remastered, although it would have benefitted from
some attention in that regard. The image is fairly solid, a little
dark, boasting a film-like quality heavy with grain. There's
nothing wrong with the image, but it could have been a little
bit tighter.

The stereo soundtrack is clear and relatively dynamic - especially
since the only sounds we hear are the narration and music. (Occasional
sound effects are employed for dramatic effect.)

A few solid bonus features are included here. First and foremost
is Snyder's earlier film, The Titan: Story of Michelangelo
(63:26). Narrated by Frederic March, this 1950 documentary was
created using footage shot by the Nazis for propaganda purposes and
later seized by the OSS, which was then edited together with newly-shot
material by Snyder. The result won the Oscar for Best Documentary
Feature. Snyder tells much the same story here as he would later
tell through Self-Portrait, but using a more straightforward
narrative format. It's very good. Also included here are
excerpts from other Snyder films (28:01), World of Buckminster Fuller
(Fuller was Snyder's father-in-law), Pablo Casals: Of Music and
Humanity, Anais Observed: A Portrait of the Woman as Artist,

Claudio Arrau, The Henry Miller Odyssey, and Willem de
Kooning: Artist. Finally, we have a short Interview with
Robert Snyder (6:33), in which he discusses Self-Portrait.
It's a nice set of bonuses.

is a lasting film biography that utilizes an engaging narrative approach
to illuminate the life and mind of one of the most towering cultural
figures of all time. It's a very memorable documentary.
Highly recommended.