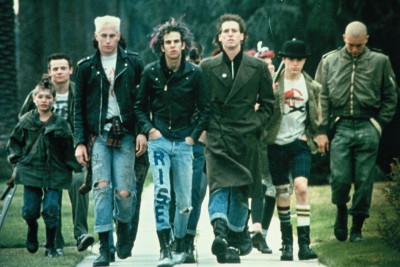 With its roots planted firmly in the
exploitation films of the 1970s, Penelope Spheeris' Suburbia
is a gutsy, arresting movie that nevertheless can't escape the limitations
of its small budget. Spheeris applied the exploitation formula
to new subject matter, and a new setting, making Suburbia seem
slightly more novel than it actually is. I would contend that
Spheeris undercut her obvious passion for the plight of these characters
by forcing them into a script filled with genre clichés.

After a wonderfully shocking opening sequence
in which an infant is thrashed to death by a Doberman, we enter the
world of the T.R. gang, a group of angry, dispossessed teenagers who
- through one set of circumstances or another - have wound up homeless.
They live in an abandoned neighborhood somewhere on the outskirts of
Los Angeles, stealing food and branding each other with the initials
of the gang (which stand for The Rejected). The T.R. kids find
themselves hounded by psychotic middle-class home-owners and the police
as they attempt to carve out a place for themselves in 1980s America.

First and foremost, these kids
are pure punk. Characters like Jack Diddley and Joe Schmo sport
ragged leather jackets adorned with their own embellishment and scrawled
handwriting, outrageous hairstyles, and contempt for conventional wisdom
in all its forms. The film's publicity materials make much of
the fact that the movie contains "live" performances by D.I., The
Vandals, and TSOL. The music is important, but what's more important
is the "fuck you" attitude embodied by the characters in the movie,
and their reasons for holding it. As an outgrowth of a decline
in middle-class values - mainly the crumbling of the enormously attractive
social façade first built in the 1950s and the fraudulent politics
of the 1960s and 1970s - these characters represent a broad range
of young people who came of age between 1975 and 1985. Self-mutilation,
a lack of hygiene, music that expressed pure rage, and personal style
that intended to offend were a few of their weapons. Writer-director
Penelope Spheeris, who first covered the punk scene in her excellent
documentary series, The Decline of Western Civilization, captures
this attitude exceedingly well, and in that sense Suburbia is
an interesting document of an era.

However, it doesn't have
much else to recommend it. Spheeris chose to cast mostly non-actors,
and that makes sense in theory, especially given her involvement in
and knowledge of the LA punk scene. However, she may have taken
this good idea too far; the actors don't appear to have been coached
at all, delivering flat, perfunctory line readings. They often
seem more like kids antsy to get the job done and go home than disaffected
youth.

The film is inappropriately
lit, sometimes looking more like an '80s sitcom than the gritty melodrama
it means to be. And, while a film of this sort shouldn't look
glossy and expensive, it should at least bear some level of editorial
polish, but Suburbia is missing that element. It renders
the storytelling choppy, arbitrary, and often inert.

Suburbia will be of
interest to anyone with fond memories of the LA punk scene, early '80s
movie culture, or exploitation flicks. It's too bad that it
doesn't live up to its promise, however, as it could have easily been
a much better film had more attention been paid to the performances
and narrative filmcraft.

This is the second release of Suburbia on DVD, but the image
doesn't appear to have been touched one iota since its theatrical
release. The enhanced 1.78:1 picture is blurred and dirty, marred
with fuzz and scratches. It's a grimy look for a grimy movie,
which is appropriate in a way. On the other hand, griminess is
supposed to come from the design and photography, and not from the actual
master.

The same can be said of the stereo soundtrack, which is distractingly
packed with pops, hiss, and other hiccups. It's a dull track
that hasn't been restored at all; fortunately the musical sequences
were relatively well-recorded.

There is a Commentary Track by Spheeris that is ported over
from the previous DVD release, and it's kind of dull. Spheeris
is watching the movie for the first time in many years, and it's mostly
a fairly private, quiet stroll down memory lane. There is a second
Commentary Track, with Spheeris, producer Bert Dragin, and
actress Jennifer Clay (who plays Sheila, the female lead). This
one is quite a bit better than Spheeris' solo track, as it contains
far more discussion of production details and the challenges of shooting
on a budget. There is also a Photo Gallery and Trailers

for Suburbia and other Roger Corman productions.

Although it will be enjoyed
by punk fans and nostalgia-seekers, Suburbia doesn't quite
hold its own as a film. It has a certain appeal, but the performances
are mostly unconvincing and the filmmaking is choppy. Rent
it.