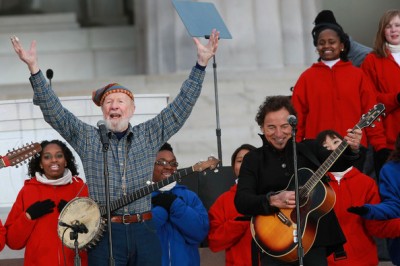 A year and a half into the
Obama presidency, watching this two-disc set of inauguration day celebrations
feels odd, distant, and inappropriate. Of course, these events
originally took place at an appointed time and place for the express
purpose of marking an historic moment of great significance. At
the time, it seemed to some that no ceremony could be too large
to recognize the passage of the Bush era and the beginning of a new
and potentially radical one. It now seems as though the anticipation
outpaced the reality. Viewed in retrospect, the inaugural celebrations
seem far more dated than they should - a record of something that
we now take for granted. The Obama presidency has not met with
anyone's expectations - his most fervent supporters have been alternately
cheered and stymied by his mixture of calculated risk-taking, legislative
shyness, and centrist populism; his most venomous opponents have made
fools of themselves painting him as a messianic radical, while traditional
conservatives have found grist for their punditry in Obama's liberal
spending policies.

Whatever one's views, the
inaugural ceremony and concerts seem like weird relics from a time long
past - much longer than the seventeen months since that January day.

This two-disc set from HBO
compiles the major events broadcast that day, although they are arranged
oddly.

The first disc begins with
an Invocation by Reverend V. Gene Robinson, a prayer for good
things to come, which leads into We Are One: The Obama Inaugural
Celebration. This concert combines speechifying and musical
performances, all carried out quite tastefully on the steps of the Lincoln
Memorial in front of the new First Family and an enormous crowd of thousands.
The two-hour concert includes musical performances by Bruce Springsteen,
U2, Mary J. Blige (looking downright awesome in all cream, plus snakeskin
boots), Stevie Wonder, James Taylor, John Mellencamp, Bettye LaVette
and Jon Bon Jovi, and Pete Seeger. There are also special presentations
by everyone from Denzel Washington and Martin Luther King III, to Marisa
Tomei and Jack Black. It's a stately, dignified show.
The musical performances are all rather strong. The emotional
highlight comes near the end, when 90-year-old Pete Seeger takes the
stage to lead the company and the audience in a rendition of "This
Land is Your Land."

The second disc begins with
President Obama's Inaugural Address - which surprised me at
the time by not being his finest piece of work, paling beside a number
of his other, much more inspired orations. The other program on
the second disc is The Neighborhood Ball, the evening concert
that was more of a party than We Are One. The Neighborhood Ball
features performances by Mariah Carey, Beyonce, Mary J. Blige, Jay-Z,
Alicia Keys, and an alarmingly bearded Sting. It's mostly good
stuff, but not as consistent as We Are One. The atmosphere is
loose and club-like, which make Vice President Biden's appearance
unintentionally hilarious (although that might just be me).

Since the value of this two-disc
set mainly lies in its' role as an historical document, I wish HBO
had gone all the way. Had they included the entire inaugural ceremony
(dull as that may have been) and arranged the content in chronological
order, those most likely to purchase this set would have had a record
of the whole day, rather than these disordered bits and pieces.
Still, We Are One features a number of memorable performances, and the
set as a whole will appeal to those who want to remember this historic
occasion in years to come.

The enhanced 1.78:1 image is strong throughout all of the content
here, betraying no trace of video origins. Digital artifacts are
virtually non-existent. Everything is appropriately crisp, with
very strong detail.

There are 5.1 and 2.0 tracks in English. For my money, the
stereo track is preferable. Surround never seems terribly credible
when mixed from a live recording. The stereo track seems to better
replicate the ambience of a live outdoor concert, although I have no
specific complaints against the surround track. Both are very
good.

Although the contents of this
set already seem strangely dated, this record of President Obama's
inauguration will be valued by historically-minded collectors.
However, most of those who might be interested should just rent it.