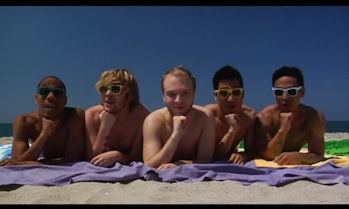 The Collection
Considering the showcase film in this collection of gay-themed shorts is also called Boycrazy, I guess I can't blame Wolfe Video for the unfortunate title--one in a line of many that seems a little too juvenile to be taken seriously: Boy Crush, He Likes Guys, Available Men, S is for Sexy, and...oh lord...the long running series Boys Briefs. These collections usually feature some mature, inspired, respectable shorts; is it too much to ask that their compilation titles reflect the same?

Sadly, this collection of six shorts probably isn't the best example to prove my point. It's one of the weaker collections I've seen, and has only a few bright spots. Here's the lineup:

Fairies (2003, USA, directed by Tom Gustafson, 20 minutes)
At a private all-boys school (of course!), young Timothy (James McKay) finds himself the target of homophobic classmates who never turn down a chance to "smear the queer" (and also like to laugh during their theater class readings when they have to say things like "fiery shaft of Cupid"). Back at home, Timothy escapes into his love for A Midsummer Night's Dream, brought to life in his own singing-and-dancing dream where his tormenters are transformed into toe-tapping friends. He creates his own glitter confetti with a special power, which he hopes to us in the real world. Gustafson's short led to the feature length Were the World Mine, which I haven't seen (it also stars Wendy Robie of Twin Peaks). The material needs a little room to breathe, and compared to this collection's other musical it doesn't stand up quite as well. It also features a loud and annoying performance from Vanessa Conway as Timothy's over-enthusiastic gal pal Angie, who ruins every scene she's in. I'm also not thrilled with the ending, which opts for an unrealistic fantasy finish to an all-too-real problem. 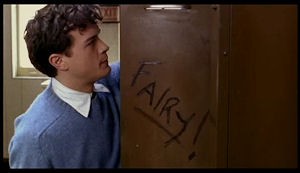 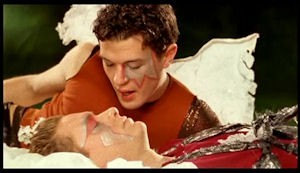 Dish (2009, USA, directed by Brian Harris Krinsky, 16 minutes)
Wow, just...wow. By far the worst of this collection, this effort befits all of those crazy "boy-centric" titles I love to loathe. It's also filled with unlikable characters, an especially big no-no in short films. Israel (Matthew Monge) is an image-obsessed, smartass 15-year-old ("Watch the hair, beeotch!") who likes to shrug responsibility at his part-time job, spent time looking in the mirror and gossip with his 16-year-old bud Louie (Jeff Martin). They spend the bulk of the film texting and talking about sex, filling the 16 minutes with meaningless drivel that serves no point or purpose other than to shock impressionable pre-teens who probably also giggle at Judy Blume novels in the elementary school library. It sort of comes across like a safe sex PSA, but a really, really creepy one: "Once I get my braces off," notes Israel, "I think I'll start sucking..." Yeah, I'm cringing, too (seriously, am I going to jail for having watched this?!) Louie also has some juicy comments up his sex-obsessed sleeve, like when he's talking about bud Mario's penis ("His dick curves to the left. I've never seen him hard before. When he whipped it out, I was like, 'Dang, bitch!' I've never seen a dick like that before. It's, like, rock star dick!") or an encounter with a 25-year-old ("I rimmed him," he says, followed by a line I won't type here. "I was like all up in there!"). I'm stunned this film was included; it dips so low, almost coming across like softcore porn. Israel's final encounter with similar-looking crush Ricky (Octavio Altamirano) attempts to spin this as a positive message movie, but I'm not buying it. This short alone almost makes this collection worth skipping; it could have been made by horny 12-year-olds. 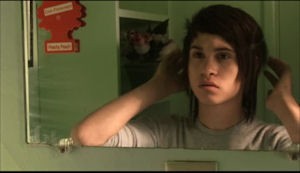 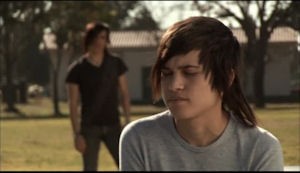 Teddy (2009, New Zealand, directed by Christopher Banks, 13 minutes)
In just a few minutes, my faith was renewed as some genuinely funny dialogue restored some order and respect in this collection. Neil (Chris Tempest) asks his visiting ex-boyfriend Tony (Brian Moore) what he thinks of New Zealand:

"It looks just like it does in the movies!"
"What one? Do you mean Lord of the Rings? Because that was all done on computer."
"No, no...I was talking about that other one..."
"What one?"
"You know, the one with...lesbian murderers!" 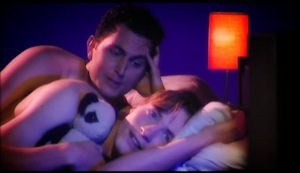 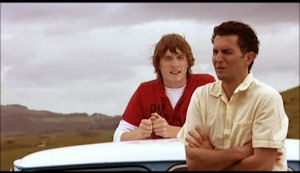 The two former flames broke up when Tony didn't want to follow Neil to Kiwiland, where the ex now has a new lover Phil (Alan Granville). But there's some unresolved feelings and sexual tension to content with when the two reunite--and we also learn the importance of the titular character. Compared to what preceded it, this short is a welcome relief. But it needs a few more minutes--it feels like a scene is missing between two critical moments, and the awkward shift from funny to somber is a little abrupt. Still, this is a decent offering. 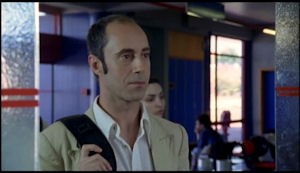 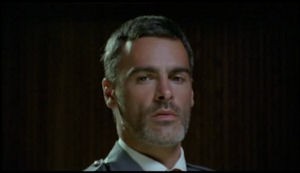 Frequent Traveler (2008, Germany/Portugal, directed by Patricia Bateria, 8 minutes)
By far my favorite entry, this is also the shortest. A traveler (Anton Skzrypiciel) goes out of his way to catch the attention of a sexy airport security worker (the smoldering Pedro Carmo) with hysterical--and jaw-dropping--results. This is a dirty little entry that made my eyes open wide with semi-shock, and I loved every second of it. It almost plays like one of those long and suggestive European commercials that you'd never see in America (what this commercial could be for, I won't say). This foreign effort is practically a silent film, and the 11 words spoken are in English. Short and sweet, it offers just the right dose of twisted humor and is easily the most memorable of the bunch. (Whereas Dish was juvenile dirty, this is classy dirty.) 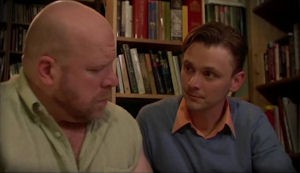 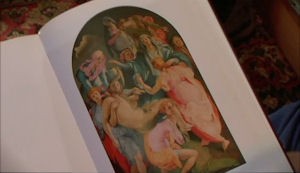 The Back Room (2008, USA, directed by Greg Ivan Smith, 16 minutes)
Get your head out of the gutter...this isn't porn. As closing time approaches, a brainy bookstore manager (writer/director Smith) gets initially irritated when a blue collar bear of a man (Dan Sturges) slips in at the last second in search of books about an artist that inspired him on a recent trip to Florence, Italy. That quickly intrigues Errol, who may have more in common with the brute than he thought. This entry can be sweet, romantic and inspirational if you're in the right frame of mind, but it follows an obvious arc and doesn't offer much by way of surprise (and one crucial exchange of dialogue may have you rolling your eyes instead of swooning). I was also distracted by the filmmaker's decision to use some out-of-place close-up cuts of the customer meant to represent Errol's point of view--they sexualize the moment, which doesn't feel authentic to the overall intention of the piece. 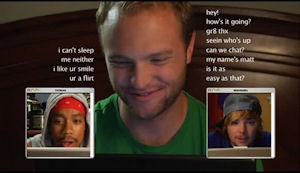 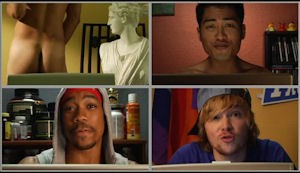 Boycrazy (2009, USA< directed by John Sobrack, 25 minutes)
Just when you thought Glee couldn't get any gayer, along comes Boycrazy to make things even more festive. Corey (James May) is a single West Hollywood socialite who is lying to himself: "I want to believe in soulmates, but it's all a little too...Disney for me." He spends his time having fun at the clubs and online, never turning down the smile of a handsome stranger. "I'll admit I'm searching for Mr. Right, but until he's found, you know it's Mr. Tonight!" he sings in the film's first musical number, which we hear a longer version of in the closing credits ("The single life, it can't be beat, enjoying both the trick and treat!"). 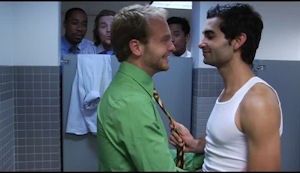 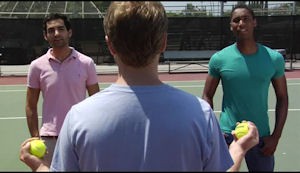 You probably know already if you're up for it. I'm not a musical man myself, but you have to at least give Boycrazy credit for its enthusiasm. Corey finds himself forced to make a decision as he's caught between two admirers: ex-boyfriend Nathan (Navaris Darson) and new interest Derek (Brandon Alter), a co-worker he runs into at the office. We get singing and dancing from a bevy of shirtless men on the beach and in the gym, brandishing towels in suggestive ways as they shout out loud. Sobrack's lyrics (set to Trevor Cushman's music) don't set the world ablaze: "What do I do? Pick a side, serve the ball!" sings Corey on the tennis court. "What a vicious game we play, when love means no score at all! Game, set, match...40 love!"

Boycrazy has fun, and it's the most colorful entry of the bunch. Even though I wasn't really in the mood for it initially, it partially won me over by the end--although a final punchline smashes what I thought was a romantic ending (it's a sad exclamation point that I was surprised by, but I guess Sobrack couldn't resist the joke). If you can stomach random, forced rhymes (the songs sometimes back the lyrics into a corner) and excessive cheese, sit back and enjoy. It's silly, but more infectious than you might think--and its energy alone make it one of the standouts here. 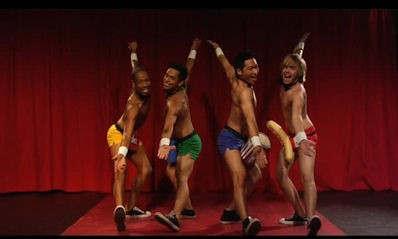 Video/Audio:
The disc provided for this review was a screener, and hopefully doesn't represent the final product (no menu was even provided). It offered a non-anamorphic widescreen presentation, and the quality of the video varied with each film--with Fairies having the worst quality. They're all passable, but none were hugely impressive (if we get a final product, we'll rate the technical qualities). The 2.0 track was decent; no word on any subtitles.

Extras:
No extras were included on this screener, and it looks like the final product is also bonus-free.

Final Thoughts:
I've seen better collections of gay-themed short films, but this six-entry offering still has a few bright spots--primarily the shortest film, "Frequent Traveler". Musical fans will be pleased by the bookend films, including the titular offering--the most energetic short here, it grows on you despite its excessive cheese. But by all means, skip "Dish", a huge disappointment that offers nothing more than pointless dirty talk. For niche fans only, this comes with a very mild Rent It recommendation.