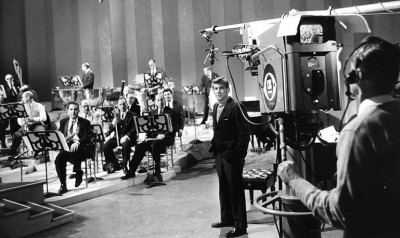 The releases that have emerged thus far from
the partnership between E1 Entertainment and The Archive of American
Television (which include Orson Welles in an adaptation of King Lear,
along with a wonderful Studio One Anthology) remind us that,
in its first decade or two, television was filled with the promise of
boundless creativity, where true artists experimented with form and
content. In the newly-built playground of the medium, writers
like Paddy Chayefsky and Rod Serling flourished, directors such as Robert
Altman and Sidney Lumet cut their teeth, and serious intellectuals like
Mortimer Adler, Aldous Huxley, and William F. Buckley, Jr., were guests on chat shows. Television also offered regularly-scheduled educational
programming aimed at adults. One such program was Omnibus,
hosted by the great English Yankophile Alistair Cooke, on-and-off (and
on different networks) from 1952 to 1961. This collection of

Omnibus programs gathers all seven episodes that featured lectures
and performances on classical music by composer and conductor Leonard
Bernstein.

Bernstein has a lively, engaging,
down-to-earth style, despite the "high culture" origins of his subject
matter. His enthusiasm, encyclopedic knowledge, and innovative
style of presentation guarantee a renewed interest in classical music
for anyone who watches these specials. Although some of the terminology
may go over their heads, even young children will be fascinated by the
engaging material here, much of which is elucidated in a surprisingly
visual way. Each episode utilizes a slightly different mode of
presentation, depending on the material at hand.

Beethoven's Fifth Symphony
features Bernstein standing on a large stage with the first page of
Beethoven's score replicated on its surface. As an exploration
of the opening movement's iconic fame, Bernstein looks at Beethoven's
own discarded musical sketches - first at the piano and then by conducting
the Symphony of the Air (the reformed NBC Studio Orchestra). By
replacing portions of the final work with earlier draft versions, Bernstein
illustrates Beethoven's ability to locate the "correct" content
through a process that combined a sense of organic evolution with creative
intuition. The program concludes with a full performance of the
symphony's first movement.

In The World of Jazz

Bernstein steps out of the realm of classical music and performs a deep,
forensic dissection of jazz music, an area in which his expertise was
equally refined. He avoids the historical approach - "Up the
river from New Orleans," as he puts it - and instead opts to look
at jazz from a purely musical point of view, describing what notes and
chords make jazz special. He refers to the sense of "play"
in the music and the emotional frankness behind it. Diving into
the nuts and bolts, Bernstein delivers what is in many ways a definitive
introductory master class on syncopation and jazz dynamics.

The Art of Conducting
answers one of the first questions asked by just about anybody who's
attended a performance by an orchestra: What the hell is that pretentious
showboat doing up there? Bernstein was primarily known
to the public as a conductor, although his achievements as a composer
may outlast his influence in the former arena. This program sheds
light on one of the most obscure areas of classical and orchestral music.
Bernstein digs down into some very technical material that rewards close
viewer attention. Briefly put, the conductor is in charge of interpreting
the music and directing very precise details of an orchestral performance.
This program is one of my favorites on this excellent set.

Next, Bernstein traces the
development and characteristics of American Musical Comedy.
As the composer of West Side Story, Candide, and On
the Town, Bernstein himself was a major contributor to the form.
Broadcast in 1956, this episode was developed as Candide was
preparing to open on Broadway, and it includes several specially-staged
excerpts. Bernstein places musical comedy into context, as a form
that combines elements from prior theatrical genres - such as vaudeville
and grand opera - resulting in something unique.

Introduction to Modern
Music demystifies the work of composers generally considered
avant-garde in the 1950s - and not broadly appreciated by middle-class
audiences. Beginning with the topic of tonality, Bernstein explores
why and how such harsh sounds began to arise from the orchestra and
other nontraditional sources (electronic machines and prepared pianos,
for instance). Again, it gets very technical and specific, an
approach the respects rather than doubts the viewer's intelligence.

The Music of J.S. Bach
takes us back to the highpoint of the development of classical music.
We begin with a segment that shows Bernstein preparing a performance
of Bach's music with the orchestra. Following this, he conducts
excerpts from Bach that display the composer's vast range of musical
forms and sounds. It's a great introduction that provides a
platform for Bernstein's in-depth discussion of Bach's compositional
style and temperament.

In What Makes Opera Grand?
Bernstein directs scenes from a production of La Boheme in between
a discussion of opera's defining characteristics, both musical and
dramatic.

These programs were taken from source material over 50 years old.
The full-screen black-and-white images were first broadcast live, and
look pretty good considering their age. Although the images flicker
and there are lots of shadows, these are source defects that mostly
would have been visible to viewers in the 1950s, too. It would
appear that significant restoration work has been done, since many programs
from the same time - including The Honeymooners - look a
lot worse than this set. Audio is monaural and is okay; there's
the expected hissing and popping, but the music comes across pretty
clearly. In any case, the tracks aren't damaged or lacking in
a distracting way.

On Disc 4, a bonus program has been included to bring the total for
the set up to eight: it's a selection of scenes from Handel's

Messiah, broadcast as a special Christmas episode of Omnibus
in 1955. The performance is by Bernstein conducting the Symphony
of the Air, with Schola Cantorum of New York directed by Hugh Ross.

This is an exemplary group of educational documentaries. Each
is entertaining and engaging in its own right. As a group, they
reawakened my own somewhat dormant interest in classical music.
This is a very nice package from E1 and The Archive of American Television.
Highly recommended.