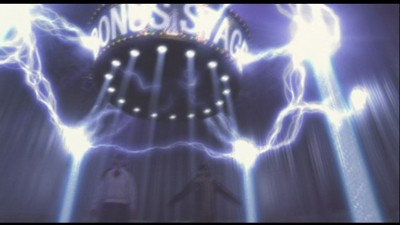 20th Century Boys was one of the more acclaimed and popular Japanese comics of the past decade. Created by master manga artist Naoki Urasawa, it spanned six years and twenty-two books. Needless to say, when the manga was adapted into a live-action trilogy by director Yukhilo Tsutsumi two years ago, it was a big pop culture event. A portion of these books has been published in America since then, and now the movies are being imported, as well. The first dropped at the end of last year (you can read my thoughts on it, and more on the comics, here), and now we have 20th Century Boys 2: The Last Hope.

Compressing anything as complex as 20th Century Boys into three films is a big task, and the filmmakers have clearly followed Peter Jackson's model from Lord of the Rings. This is an incomplete adaptation, leaving in as much as possible and staying mostly faithful, with each part basically standing on its own but really working best as a component of the larger whole. This is most obvious with The Last Hope, which takes its function as the middle chapter very seriously. 20th Century Boys 1: Beginning of the End adapted the first five volumes of the series, establishing Urasawa's world and building to a logical stopping point: the turn of the century, when the cult-leader Friend unleashed a deadly virus on Japan, now referred to as Bloody New Year's Eve. The Last Hope adapts volumes 6 through 15, and it picks up fifteen years later. (U.S. readers will note that the most recent volume published by Viz in America is still the sixth, so you can count on there being spoilers forthcoming.)

The rise of the Friend organization and the doom it is secretly perpetrating on the world is based on the childhood fantasies of a group of kids, with Kenji Endo (Toshiaki Karasawa) being the one who wrote it all down. Those same kids, now grown-up, tried to stop Bloody New Year's Eve and failed. Kenji is now missing and branded a terrorist, and the story has shifted to his niece Kanna (Airi Taira). She is now a teenager, working in a rough neighborhood and getting by on her own, only occasionally being checked on by the one female in Kenji's group, Yukiji (Takako Tokiwa). Kanna is clearly some kind of blessed child. She is fearless, a good fighter, and more important, people listen to her. She believes her uncle is innocent, and she is moved to action after violence around her makes it impossible for her to do nothing. The plot will show her detouring into a Friend re-education camp and seeking out the masked man's true identity.

A second Book of Prophecy has come into play that extends Kenji's original sci-fi imaginings. A lot of what happens here hearkens back to manga and anime from the 1970s, and we even see an apperance by Gigantor and get a couple of comic book artists as characters. The new book says a savior will rise to preserve justice, but will be killed instead. It is believed that Kanna is this savior, and that she will end up killing Friend when he stops at a church in her neighborhood. Kenji's pal, the badass Otcho (Etsushi Toyokawa), a.k.a. Shogun, breaks out of the Friend prison where he has been held since Bloody New Year's, and he works to get to the church ahead of Kanna and protect her. His arrival there is one of the best scenes in the movie, as is the standoff that follows. It's one of the more smartly directed parts of the film, taking The Last Hope into some pretty cool action territory. Tsutsumi also follows Urasawa's cues and his ability to blend past and present is perfect. 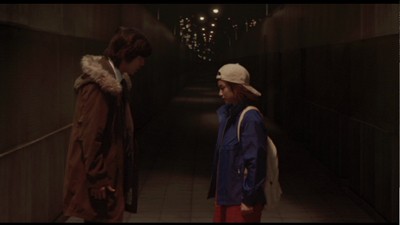 If only more of the movie were as on point as that, 20th Century Boys 2: The Last Hope would be a much better filmic experience. The adaptation should be playing up the sci-fi action elements, the mystery stuff isn't as strong in this cinematic arena. Which isn't to dismiss The Last Hope, I still enjoyed watching it; the problem is that it feels like we're biding our time, waiting around for something more to happen. Arguably, Naoki Urasawa actually takes longer to get through all this plot in his comics, but the way he tells a story, it always feels like the books are moving forward. His layouts work in such a way as to compel the reader to turn the page, and thus the story always feels like it's being driven toward something. Without his clever panel constructions, much of The Last Hope is just exposition--and exposition that makes no sense if you aren't already in on what's going down. It seemed like a good portion of the movie is just people standing and staring into the sky while getting bad news.

Both Taira as Kanna and Toyakawa as Otcho are really good, though, and the scenes where they get to strut their stuff end up being the movie's saving grace. Kanna gets into a couple of scrapes, and though some of the narrative between her and Chono (Naohito Fujiki) gets a bit muddled by some of the cuts made from the text, their confrontations with one of Friend's enlisted killers have some genuine menace and suspense. I also liked the segments inside the Friend camp and Kanna's detour to try to track down her mother. I could have maybe done without the addition of Kanna's slapstick classmate Koizumi (Haruka Kinami), but then, she was kind of funny. Much of the humor in the movie is over the top, and be wary of overacting from the bit players.

Honestly, I think a lot of my criticisms of the 20th Century Boys trilogy so far would have a lot less weight if this were a television miniseries rather than a big movie franchise. The production is more on the level with network or basic cable shows in America, and were I watching them all as a set rather than one at a time and a few months apart, I'd be down with the program. (Then again, I also hated this kind of storytelling in Lord of the Rings and still think Jackson's bloated geek-out is one of the most boring times I've had at the movies in, well...ever.) There aren't a lot of special effects this time around, and so only one chintzy CGI sequence (a bullet through the head). The virtual reality effects are fun, and the grand sets for Friend's headquarters look pretty good, too. But, again, looks good for the small screen, not the big. 20th Century Boys isn't necessarily Dr. Who cheap, but it's definitely not blockbuster worthy. It remains to be seen how the big finale--which judging by the teaser that plays after the end credits here, is going to require even larger effects work than vol. 1--will come off.

Those disclaimers being what they are, 20th Century Boys still holds my interest. Part of it is because I am a fan of the comic, and, really, it's down to Urasawa's skills as a storyteller that the skeleton of his tale is so well constructed, it can't be completely dismantled. Those who come to the series cold may feel otherwise. As filler goes, The Last Hope does its job in bridging the gap, and it more than fulfills its prime directive of enticing me to stick around to see what happens next. 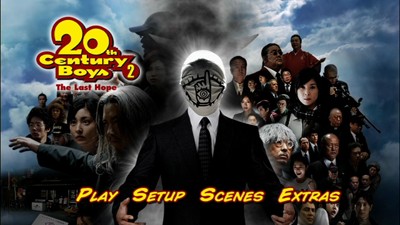 Video:
As with volume 1, 20th Century Boys 2: The Last Hope has been released as a 16:9 anamorphic transfer preserving its 1.85:1 aspect ratio. Colors are good, and the image is clean. Some of the blacks are a little hazy, and I noticed a bit more fuzziness than I did in volume 1. Still, this is above average in terms of picture quality.

Sound:
Also matching the first disc, the Japanese-language soundtrack for The Last Hope was mixed in 5.1 and 2.0 and there are optional English subtitles. They audio is actually better in quality than the video, I find nothing to complain about here. The atmosphere amidst the speakers has some good details, and whenever the soundtrack starts rockin', the music sounds great.

Extras:
The bonus features are all trailers: English trailers for all three 20th Century Boys films, a collection of the Japanese promos, and clips for other Viz releases.

The only paper insert this time is an advertisement; there is not a character guide as with volume 1. Something like they have in the comics, where we see the adult versions of the characters next to their childhood counterparts from the flashbacks, would have actually been nice. There are a lot of characters to keep track of here, and three different timelines, so it can get confusing.

FINAL THOUGHTS:
The 20th Century Boys trilogy continues to be some fun sci-fi entertainment, even if this second installment of the Japanese sci-fi actioner is more of a bridge than a solid tale in its own right. 20th Century Boys 2: The Last Hope is the middle of the trio, taking us forward 15 years from the end of the first movie and continuing the story of a future where a religious cult threatens to destroy the world. The young female heroine added this time around adds some energy to a script that is otherwise a lot of exposition. Though I think the series will work better when it's collected into one package, 20th Century Boys 2: The Last Hope is still Recommended. 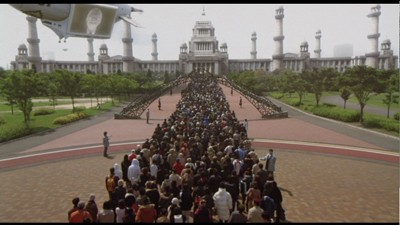