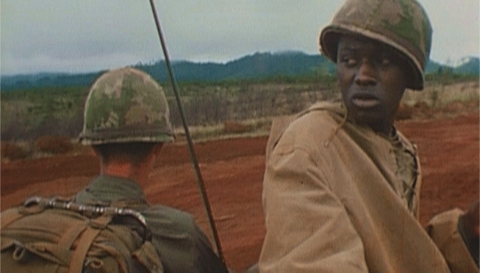 Uncompromising in its execution, Lexy Lovell and Michael Uys' The Good Soldier is a potent documentary with a familiar message: War is Hell. Format-wise, the film doesn't stray to far from most templates: we're introduced to a group of participants whose talking head interviews reference what they've gone through. The Good Soldier's resounding arguments may not change the minds of those who support war and combat in all forms; likewise, it may only strengthen the beliefs of those who question it. Taken at face value, then, Lovell and Uys' film may not seem to have a forceful or lasting impact. Yet the film's effective editing and skillful debate tactics earns it high marks: this is a well-made documentary in nearly all departments. It has been designed to move and provoke viewers, but certainly doesn't feel manipulative. Instead, the carefully chosen words and raw, blistering combat footage work together to tell a fragmented, yet cohesive story.

Without question, The Good Soldier's greatest asset is its scope: veterans from WWII, Vietnam, Desert Storm and the current Iraq/Afghanistan conflict are given time to clear their consciences. It's often not about who or what, but why: grisly wartime details are discussed, but the justification for certain details is never glorified or flaunted. Most of these veterans succumbed to feelings of revenge on more than one occasion, but all are deeply resentful of their actions---as well as the actions of their fellow soldiers. Many were gradually worn down as the atrocities weighed on their minds. Some directly disobeyed their orders and were punished accordingly, even if it meant leaving a career they devoted their lives to.

Recently-recorded interviews are peppered with combat footage; these scenes are absolutely not for the squeamish, but they're absolutely necessary for The Good Soldier to get its point across: war is not always the answer, whether it's from a political, public or personal standpoint. It's not anti-military (or blatantly anti-war) by any means, but it encourages rational judgment instead of knee-jerk reactions. The Good Soldier is certainly not the first documentary (or film in general) to take such a stand, and it certainly won't be the last. In any case, this is an honest, heartfelt and genuinely moving account of war from several different perspectives, and these elements make The Good Soldier work almost flawlessly. Many of the events, whether described orally or shown in graphic detail, do not deserve to be spoiled. The film doesn't dwell on these horrific events; likewise, the participants don't beat us over the head with ham-handed, politically charged sentiments.

The film is guilty of preaching to the choir at times...but more than anything else, The Good Soldier doesn't blatantly attempt to win over those on the other side of the fence. It simply argues for the destruction of the fence.

Presented by Out of the Blue Productions, The Good Soldier arrives on DVD with little fanfare. This one-disc release is advertised as a "Limited Edition", and here's why: it's currently available through the official site (linked above) or third-party sellers, which will certainly limit its audience. Paired with a plain-wrap technical presentation and absolutely no bonus material, The Good Soldier is a fine documentary...and that's about all this DVD has going for it, unfortunately. Let's take a closer look, shall we?

Presented in its original 1.78:1 aspect ratio and enhanced for 16x9 displays, The Good Soldier looks a little rough around the edges. Obviously, the footage varies in quality: some of the on-the-fly battlefield sequences and vintage clips are in worn or less-than-ideal condition (and cropped to fill the 16x9 frame, unfortunately), while other segments suffer from mild pixellation and edge enhancement. Additionally, this transfer is not progressive, which results in moderate amounts of digital combing from start to finish. It's not a pretty picture overall, but most documentary fans shouldn't be bothered by some of these issues.

The Dolby Digital 2.0 Stereo mix is somewhat low-key but still has its moments. Separation is strong and the narration comes through clearly, never fighting for attention with the film's occasionally dramatic score. Overall, it's a basic mix that gets the job done nicely. Unfortunately, no optional subtitles or Closed Captions are offered during the main feature. 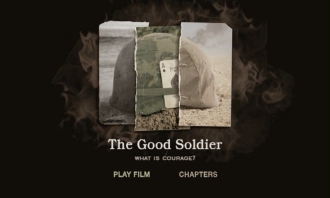 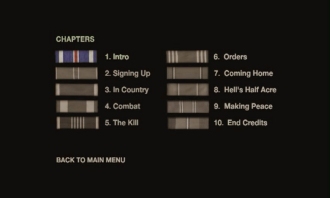 Seen above, the static menu designs are simple and easy to navigate. The 79-minute main feature has been divided into 10 chapters, while no obvious layer change was detected during playback. This one-disc release is housed in a standard black keepcase and includes no inserts of any kind.

Bonus Features
Nothing here; no commentaries, interviews or even trailers, which is disappointing for a released touted as a "Limited Edition". The film does a decent job of standing on its own two feet, but limited availability---combined with this lack of bonus features, of course---will undoubtedly limit this film's audience.
Final Thoughts

Undoubtedly one of the better documentaries of 2009, The Good Soldier gets its point across through several generations' worth of footage and testimonials. Though it certainly preaches to the choir on several occasions, the film's persuasive, passionate arguments are hard to deny---and even at a brisk 79 minutes, the details never feel rushed. Unfortunately, Out of the Blue's DVD package doesn't offer much support, pairing a relatively bland technical presentation with absolutely no bonus features. Combine that with the fact that this "Limited Edition" may be tough to find, and this potentially great release gets taken down several notches. Nonetheless, The Good Soldier is absolutely worth watching and comes Recommended if you can track it down.