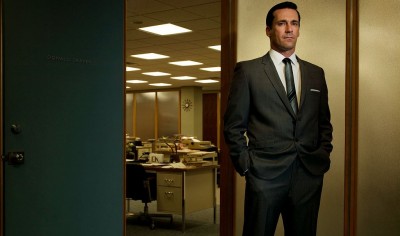 After three seasons, Mad Men remains one of the most original, compelling dramas on television. Propelled by varied, complex characters and committed to a realistic depiction of its milieu, the series remains unpredictable, convincing, and always riveting.

Mad Men: Season Three takes place between March and December of 1963. The ad agency Sterling Cooper is now under the aegis of a British parent company, and a new in-house financial officer, Lane Pryce (Jared Harris), is sent from England. Pryce and his pandering assistant have a rough time fitting in with the existing corporate culture in New York. Other changes have taken place, too: Pete Campbell (Vincent Kartheiser) and Ken Cosgrove (Aaron Staton) are co-heads of Accounts. Sal Romano (Bryan Batt) begins directing television commercials. Joan Holloway (Christina Hendricks) is now Joan Harris, having sadly married the young surgeon who raped her halfway through the second season.

On the home front, Don Draper (Jon Hamm) and his wife Betty (January Jones) have reconciled, and the birth of their third child is imminent. Betty's father Gene (Ryan Cutrona) moves in with the family as his encroaching dementia becomes more pronounced. Daughter Sally (Kiernan Shipka) matures a bit, growing into a complicated and sometimes angry child.

The 1960s never looked so good, or felt so ominous. The program's lush production design and costumes, and its amber-hued photography, are like water to the oil of the undercurrents that constantly beset its characters: social change, political violence, and suburban repression hide in every nook and cranny. Our protagonists are (mostly) prosperous and secure in this postwar idyll, but they have paid for it with a façade of cultural homogeneity that is under constant threat of being exposed as a fraud - a fraud perpetrated in large part by the ad men themselves.

As the thirteen episodes unfold, familiar themes develop - but that is in no way a criticism. These characters live in a world shaped by unresolved, and therefore cyclical, issues of their repressed natures. The show's writing - overseen by creator and executive producer Matthew Weiner - is its most outstanding feature; coupled with the cast's deep engagement with their characters, this makes for winning television. Some familiar themes taken in new and sometimes startling directions include the following: Sal's apparent homosexuality is finally confronted directly. Don's obscure past is revealed more clearly than ever before. Tragedy strikes the Draper family. Copywriter Peggy Olson (Elisabeth Moss) begins an alarming affair with a former Sterling Cooper executive. Roger Sterling's (John Slattery) marriage to former secretary Jane (Peyton List) causes a rift between he and Don. Draper begins a fruitless, dead-end affair, while Betty embarks on one that has serious consequences.

Mad Men's third season is very strong. The first seven episodes set up new dynamics, establish new subplots while illuminating existing ones, and continue to extrapolate new angles from the show's overarching themes. Character development is rapid, efficient, and fascinating. We see Roger Sterling, for example, transform from a gregarious hob-nobber into an angry, somewhat alienated middle-aged loner. His company has been taken away from him (well, he sold it, anyway, and his role under the new regime is largely ceremonial), he has driven his family away by marrying the frivolous Jane, and his relationship with said new wife is hardly fulfilling. Peggy Olson, too, goes through some significant changes. She moves to Manhattan, gains more confidence in her talent, and, as I mentioned, begins an affair that seems ill-advised, at least on the surface.

However, these seven fantastic episodes of nonstop character and plot momentum give way to three duds, or near-duds. Episodes eight through ten virtually stagnate the season, with some rather ineffectual plotlines being quickly written into and then out of the show. Don and Betty take a trip to Rome during this lull, and it's a lot less picturesque and exciting that it should be. Also, these episodes include Don's rather arbitrary affair with a schoolteacher. The part of the teacher miscast and their dynamic is not convincing. However, one plot thread that successfully carries through these episodes is Don's growing personal and professional relationship with a well-known American entrepreneur and businessman (and real historical figure), whose identity I won't spoil here.

The season wraps up with three very solid episodes that bring the show back up to the level of greatness. The second-to-last uses President Kennedy's assassination as its backdrop, much as prior seasons used Kennedy's election and the Cuban Missile Crisis and the impetus for changes in tone, character motivation, and other circumstantial dynamics. The plot of the season finale is wholly satisfying - and can perhaps be read as a subtle harbinger of the even more drastic changes that the country would see over the years remaining in the decade.

Mad Men's commitment to an era and a way of life is unique. Watching it is the next best thing to living and breathing the advertising business and the shifting social and cultural mores of the early 1960s. Although dealing with a real historical period and a specific industry, the show never takes docudrama shortcuts or uses expository tactics to "catch us up" on what was going on in 1963. Instead, we interpret the significance of the times through the characters - their reactions, their dialogue, and their behavior. This clues us in to what we may be missing in terms of specific historical detail, and further develops the characters, which remains the primary interest of the series. And rightly so. Not only is this a cardinal rule of good dramatic storytelling, but Mad Men's characters are incredibly rich, shaped into vibrant, multi-dimensional figures by the peerless writing staff and brilliant performers.

Don Draper is one of television's greatest characters - not just at the moment, but of all time. This seemingly impenetrable executive with matinee idol looks could have been handled with cartoonish exaggeration by an actor less astute than Jon Hamm. But Hamm transforms Draper into an endlessly fascinating man who alternates rigid ethics with twisted morals. A stand-up guy, a no-nonsense boss, a demanding colleague, and a straight shooter with clients, Draper is also a liar, a philandering bastard who takes his wife and family for granted, doing everything for himself and not a lot for them. He expects to be taken care of, and in return, he hops from bed to bed all over the greater metropolitan region. For all this, we like Don Draper. We want him to do the right thing - which, in many contexts, he does. Just not with his family. He is a flawed, likable asshole we cannot resist watching episode after episode. Yes, he's a product of a certain era, but even more than that he's the product of his own particular background - a background that is fully elucidated, albeit incrementally, by the writers and production team.

Much has been written about Mad Men, and that will deservedly continue. (I haven't had a chance to say anything substantial about the show's co-protagonist, Peggy Olson, who's almost equally as interesting as Don Draper.) The program has so much to offer, so many layers of action and plot, with at least two dozen memorable characters rich with pasts and families and quirks and vulnerabilities. The third season does not disappoint. Even with a dull third quarter, Mad Men: Season Three ranks with the best television available. This challenging drama opens doors to variegated subject matter, prompting a further look at issues both American and universal, past and present, surrounding the meaning of moral identity.

The Package
Lions Gate presents Mad Men: Season Three in a beautifully-designed package. A quad-fold digipak houses four discs, and then slips into a half-height card stand. The whole is then covered by a heavier cardboard slipcover that slides over the top vertically. It's a very handsome job, improved further by classy art direction.

The Video
Mad Men's look is stellar, and this encompasses production design, photography, and the enhanced 1.78:1 transfers on this four-disc set. The sets and costumes are simply flawless, exemplifying the simple elegance and pared-back design aesthetic of the era. The photographic approach values light over movement, which suits this character-oriented drama perfectly. The attractive imagery provides a meaningful counterpoint to the often reprehensible behavior of the characters and the perverse double-standards they either perpetrate or endure. The transfers do justice to all of this, providing high-contrast, crystal-clear pictures that are vital to our participation in the stories told here.


The Audio
The Dolby Digital 5.1 surround tracks on these episodes are sharp, clear, and highly dynamic. Surrounds are not aggressive; they are woven into the rest of the show's soundscape in a seemingly effortless way, which assists the show's realism. The range of the mix is excellent, and directional audio is used quite well, even when limited to only two channels.

The Extras
Each episode is accompanied by a commentary track; of the thirteen total episodes, nine feature not one but two commentary tracks. The dual tracks are generally split between cast and crew members. All of the principals are represented on these tracks. Participants include creator Matthew Weiner, stars Jon Hamm, Elisabeth Moss, Jared Harris, Christina Hendricks, John Slattery, and Vincent Kartheiser, along with numerous writers, crew members, and supporting and guest actors. These tracks are highly informative and almost uniformly engaging, providing interesting context, background, and production information.

Disc 1 also contains a surprisingly substantial featurette called Medgar Evers: An Unsung Hero - Part 1 (39:11), detailing the tragic murder touched on in one of the third season's early episodes. Including interviews with Evers' surviving family, this moving documentary paints a vivid picture of life in the South during the last days of segregation.

Disc 2 includes Medgar Evers: An Unsung Tragedy - Part 2 (31:13), concluding the featurette begun on Disc 1. We also have Mad Men Illustrated (14:00), a look at Dyna Moe, the graphic designer behind the online fad.

Disc 3 holds the two-part Clearing the Air: The History of Cigarette Advertising (45:25, total), another surprisingly robust and thorough documentary piece on this controversial subset of advertising. In addition, we get We Shall Overcome: The March on Washington (16:56), an effective pictorial overview of the event accompanied by audio of Dr. King's historic speech.

It's one of the most important and enthralling programs on TV. Mad Men is a program that never shies away from the true nature of its characters. Unlike the era it depicts, the series drives directly at the kind of dissembling that ran rampant across large swathes of society. Not always a matter of outright lying, the culture thrived upon (and perhaps still does) the lies we implicitly agree to tell each other; but as we all know, lies beget lies. Beneath it all, however, is some kind of goodness, and a chance for redemption. That theme is at the heart of Mad Men, driving a portrait of unhealthy characters trying to deal with their ills. This package combines outstanding entertainment with excellent technical presentation and substantial bonus content. DVD Talk Collector's Series.