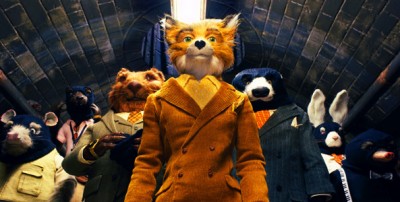 There are so many things to
enjoy and appreciate in Wes Anderson's adaptation of the classic Roald
Dahl book Fantastic Mr. Fox that it's difficult to acknowledge
the odd chill I felt when it ended. Anderson has created a meticulously
crafted stop-motion world suffused with a lovely golden light.
The voice performances are outstanding and heartfelt, aided by the dry
wit of Anderson's and co-writer Noah Baumbach's screenplay.
Anderson's uncanny ability to compose densely-packed shots that narrate
themselves, so to speak, meshes well with the anarchistic whimsy that
Dahl specialized in. Stop-motion is the perfect medium in which
to tell this story, and each frame is invested with Anderson's special
touch.

So with all those positives,
what's the problem? Unexpectedly, the movie ends on a cool,
detached note that I have been unable to fully diagnose. Let me
cover the obligatory plot summary before I continue.

In a prologue, we meet Mr.
and Mrs. Fox (George Clooney and Meryl Streep), a chicken-stealing couple
who wind up in a farmer's trap. While waiting to meet their
fate, Mrs. Fox tells her husband that she's pregnant, and in response,
he promises not to steal poultry anymore. We skip ahead a decade.
Their son Ash (Jason Schwartzman) is resolutely "different."
Mr. Fox is a newspaper columnist, but restless in his career.
The family moves from their small den to a large tree that overlooks
three large neighboring farms. Mr. Fox can't shake the old chicken-stealing
urge, and plots a raid on the farms with his super, an opossum named
Kylie (Wallace Wolodarsky). In response, the farmers launch an
increasingly aggressive and destructive series of attacks to kill Mr.
Fox and his family. The Foxes and their friends work together
tunneling to safety and, eventually, escape.

It's hard to describe the
kind of disquiet caused by the final scene (more below). Prior
to it, the film proceeded under Anderson's sure hand and flawless
sense of design. Anderson's feeling for the visuals and the
hard work of many talented animators have created a fully imagined little
world. For those who have tired of Anderson's cinematic bag
of tricks, there is no sign here that he's given them up. He's
just traded live action for animation. But Anderson's imagination
is suited to stop-motion, and Fantastic Mr. Fox is all the more
impressive coming from a director with no background in it. The
script maintains a gentle wit that bites at appropriate moments, never
shying away from Dahl's keen ability to mix the light with the dark
while maintaining a challenging sense of moral responsibility.
Chickens are killed, not "kidnapped." A rat dies, whereas
in other hands it would only have been knocked unconscious. Mrs.
Fox is deeply angered by Mr. Fox's recidivism, not just befuddled
or put out. The acknowledgement of consequences here is
a tribute to Dahl's intellectual honesty and the respect he had for
children.

My reservations about the film
lie with its ending. In fact, I have no major criticisms of the
picture up until its last five minutes. But this "payoff"
is so unsatisfying as to call into question the significance of everything
that has come before it. What bothers me is that the Foxes and
their compatriots wind up tunneling into a supermarket - a suburban,
man-made environment. They believe that this endless source of
sustenance is the end of all their problems. But they are living
in the bowels of this store, in the pipes and sewers underground, totally
removed from the natural environment they came from. The animals'
presence in the humans' supermarket seems like it's intended as
sweet poetic justice, or as some kind of a "stick it to the man"
moment. But it comes across as unintentionally sad, and I couldn't
help feeling that our heroes have been profoundly compromised, especially
after all the talk throughout the movie about how they are a bunch of
"wild animals" - purportedly, this is what makes them unique,
able, and willing to persevere against the farmers. The final
scene, therefore, seems oddly aloof from the spirit of this theme, abandoning
our characters in a cold, sterile, foreign land, scavenging for food
not meant for them. If this is intended as a bitter joke, it's
a rather harsh one; but the tone indicates otherwise. It is carried
off with the same kind of whimsy as the rest of the film, leaving me
unsure how to take it.

Fantastic Mr. Fox will
probably last because of its sure handling of stop-motion animation,
for its overall look, and for the timeless dry wit of Anderson and Baumbach.
The characters are flawed and sympathetic, and are the real foundation
of this beautifully crafted film. My reservations about the ending
notwithstanding, it's a movie that was made with real love and care.

Because Fox has sent a watermarked pre-release screener, I can't
comment on the technical presentation. The image is enhanced at
its original aspect ratio of 1.85:1. The sound mix is Dolby Digital
5.1 surround. Should Fox send the final product, I'll update
my review to reflect that.

Bonus content is painfully light. This is a shame, especially
because Anderson's first four films have all been released in outstanding
editions by the Criterion Collection. Anderson's last two films
have been for Fox, and have yet to be licensed to Criterion.
From Script to Screen (6:56) gives the briefest glimpse into what
seems to have been a fascinating production process. Still
Life (Puppet Animation) (7:21) takes a closer look at the puppet
design and animation. A Beginner's Guide to Whack-Bat
(1:11) is a faux-newsreel about the made-up sport that the Foxes and
their animal friends play. The Theatrical Trailer (2:26)
wraps things up.

Even with its flaws, Fantastic
Mr. Fox is nonetheless a nonstop visual delight, taking stop-motion
animation to new heights of innovation and beauty. Convincing
characters and excellent voice performances help sustain a delicate
comic tone. The strange ending and a lack of bonus content should
be considered before making a blind purchase. Recommended.