What more can really be said of Simon Langton's beloved and acclaimed 1995 adaptation of Jane Austen's "Pride and Prejudice?" The closest counterpart to it I can think of is the 1983 BBC production of Charlotte Bronte's "Jane Eyre." Both miniseries' are five hours in length, much longer than the standard television or (obviously) film adaptation. However, while the latter was highly enjoyable, it did suffer from pacing issues and stilted acting from supporting players. "Pride and Prejudice" is amazingly perfect in all of its 330-minute glory. The one aspect it does share heavily with "Jane Eyre" is a career defining performance from the leading man, in this case Colin Firth as Mr. Darcy, whose performance recalls fond memories of Timothy Dalton, the highlight of "Jane Eyre." More on that later. 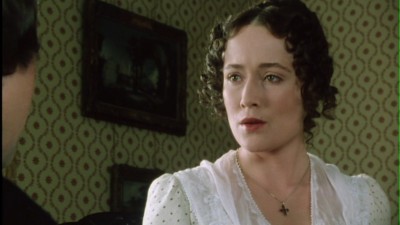 For the uninitiated, "Pride and Prejudice" is the story of Elizabeth Bennett (Jennifer Ehle), one of five sisters, all of who are unmarried. As fate would have it, two wealthy gentlemen, Mr. Bingley (Crispin Bonham-Carter) and Mr. Darcy arrive in town. What follows is a very enjoyable saga of romance, natural character growth, sly humor, and as one would expect from vintage English drama, social commentary. The romance of Elizabeth and Mr. Darcy, which I would safely say is well known as one of the great romances, springs forth at a refreshingly natural pace. It begins on a very rough note and must undergo the long way to fruition, but once the two characters are firmly headed to the logical conclusion, it's a tremendous reward for the audience. 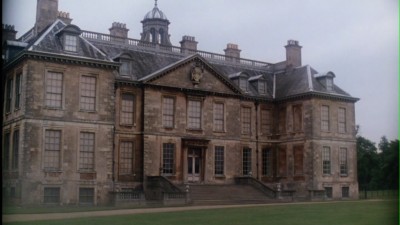 Despite the instant association of the production with Colin Firth's performance, the story belongs to Elizabeth after all, and Jennifer Ehle is more than competent in filling the character's shoes. The character's independence is well pronounced, making her sometimes-rash assumptions completely believable. Ehle is fortunately never shrill or grating, as so often is the case, at times, with characters of her nature. The performance encapsulates confidence, youthful maturity, and old-fashioned longing for love. Her rejection of Mr. Collins' proposal for marriage around a third of the way through the series is one of Ehle's most memorable scenes. She puts the pompous oaf in his place without hesitation, and it's a credit to the actor, David Bamber's fine performance that Collins remains humorously arrogant, much to the disgust of Elizabeth. 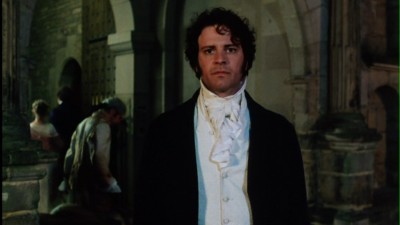 Arrogant in an entirely different fashion is Colin Firth. The most devoted "Pride and Prejudice" fans use his performance here as the measuring stick for all Mr. Darcy's past and present. Even the people behind fine 2005 feature film adaptation of the story have commented the difficulty in casting the character, noting Firth's lasting legacy. Firth deserves all praise, as this is his finest moment of acting, with his more recent Oscar nominated performance in "A Single Man" showing the range and skill of Firth as an underutilized talent. I mentioned previously that he reminds me of Timothy Dalton, both in his stoic, (sometimes) brooding and intense looks, as well as his refined, enunciated delivery. He is both a perfect foil and match for Elizabeth, socially and emotionally. 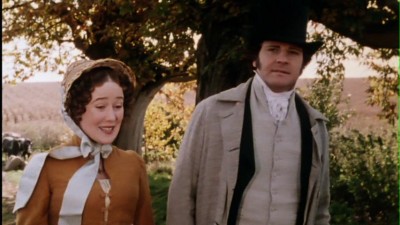 The icing on the cake is the production design; while the Super 16 film doesn't do it justice, the sets are top-notch, pulling viewers back into time, while never detracting from the performances and story unfolding. Costume design ranges from ordinary to the exquisite, with the latter put on parade at the series' more formal social outings. Unlike some costume dramas, which try to make the attire a star in it's own right, the designs support the actors and like the art design, never detract. I would compare it to "Deadwood" which was top-shelf in all categories of set design and costumes, but was utilized only to complete the feel of the period drama. If there is one fault, it would be the entirely forgettable score; I rarely noticed it and when I did it did nothing for me, coming off as decidedly ordinary, in an otherwise, exceptional production.


There is much more to "Pride and Prejudice" than what I mentioned, but logically, Firth and Ehle are the highlights. That is not to discredit the supporting cast who all turn in memorable performances, from Crispin Bonham-Carter's, Mr. Bingley, friend to Darcy and eventual romantic interest of Elizabeth's sister Jane, to Mr. Wickham a man involved in a near web of romances, including Elizabeth. The supporting characters provide the basis for solid side plots and help to fully flesh out Elizabeth's life. The one benefit of the epic length of this miniseries is these finer points get their just due, as opposed to be severely abridged in feature film adaptations.


The ultimate beauty in this adaptation of "Pride and Prejudice" is how much of a pleasure the overall experience is. It was a treat to revisit the series, which I still remember watching on video with my family shortly after it's original broadcast on A&E. This newly remastered edition restores the series as six, 55-minute episodes, as opposed to the two-volume split of the previous DVD. I highly recommend any newcomers (and old fans alike) to pace their viewings accordingly. While one could easily knock off the entire series over a weekend, it's much easier to digest and enjoy over a week's time. It gives you time to appreciate the craftsmanship of each episode and recall some of the finer moments that one may easily forget by forging ahead all at once.


The 1.78:1 anamorphic widescreen transfer is the main selling point of this re-release. Compared to the original 2001 release (which I would rate a very mild 2.5/5.0), I can safely say this is worth the upgrade. Most noticeable is newfound warmth to the transfer, much more pleasing than the noisy, de-saturated and cold look of the prior release, which frankly was a slight improvement over VHS. This improvement is most noticeable in skin tones. Noise and grain have been reduced, but I can't say for sure whether the lack of detail is due to digital tinkering or the film's source material.


The production, despite being only 15 years old, looks twice that, having been shot on Super 16 film. One can only expect so much out of that format and while this transfer is still far from stunning, it's pleasantly captures the exquisite production design and sports solid contrast and color balance.


The English 2.0 audio has one lone flaw. Vocals sound very slightly tinny at times and are mixed a little louder than background effects. Fortunately all dialogue is clear and distortion free and the frequent diegetic score is very warm and inviting. Compared to the prior release, it's a slight improvement. English subtitles are also included.


The extras, all present on Disc 2 were quite the surprise. First up is the 50-minute retrospective documentary, "Lasting Impressions." It's a nice look back at the production; many participants are interviewed and it's a tremendous upgrade from the very brief "making-of" featurette on the 2001 disc, that wasn't carried over.


"An Impromptu Walkabout with Adrian Lukis and Lucy Briers is a roughly ten-minute, lighthearted tour of some external filming locations. The duo share some fun conversation and anecdotes, more than anything else.


"Pride and Prejudice: A Turning Point for Period Drama" runs thirty-minutes in length and is heavy on interviews from the screenwriter, as well as others connected directly to the project behind-the-scenes and critics. It's a fairly gushing in its praise for the production, which can be a bit grating at times.


Lastly, is a five-minute talk with the man behind the restoration of the production. It's short and sweet, but makes one appreciate the end result even more, despite the technical quality falling short of what one would expect from a 15-year old production.

"Pride and Prejudice" finally gets the treatment it deserves on DVD. A strong transfer and some bonus features of substance make this worth a re-purchase for any previous owner; if you haven't picked this fine series up, there's no more excuse. While the story is not what one would consider a traditional "epic" this production stands toe-to-toe with the cream-of-the-crop (at least in my book) of television miniseries, including "Roots" and "Shogun," both of which are broad, sweeping epics, a far contrast to the intimate nature of "Pride and Prejudice." DVD Talk Collectors Series.