My Dog: An Unconditional Love Story

Docurama // Unrated // May 25, 2010
List Price: $26.95 [Buy now and save at Amazon]
Review by Cameron McGaughy | posted June 25, 2010 | E-mail the Author
"There is that famous test about how to determine who loves you more, your dog or your wife: Lock your wife and your dog in the trunk of your car for an hour, and then open the trunk and see who's happier to see you."
- Billy Collins 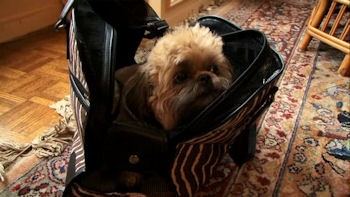 The Movie
On my frequent walks through the neighborhood, I pass through a park on my way to the gym. And almost without fail, I am distracted--and turned into a giant mound of love mush--by one of two Bernese Mountain Dogs that frequent the area. I smile, I squeal, I pet, I talk in a baby voice...a disgusting display, but one I'm proud to embrace given the pure joy pooches provoke in me. And don't tell my two friends in DC that the main reason I like to go to their home is to hug and squeeze their lovable St. Bernard, whose floppy ears, wet schnoz and giant paws are so cute I could kill myself.

In case you haven't figured it out, I'm a dog person--and the bigger the better. While I appreciate the cuteness of acceptable small dogs like Beagles, Pugs and Bulldogs, I like them giant and sloppy with large, cartoon-like features I can squeeze (to me, a Lab is "normal" size, my starting point for optimum gushing). And if I ever get my act together and actually buy a home (don't hold your breath), I plan to get at least one of the above mentioned breeds to start. Also in top consideration are Mastiffs (must...have...Mastiff!), both regular and Bull; Great Danes; Golden Retrievers; Rhodesian Ridgebacks; and German Shepherds, in honor of my dearly departed Brandy--a German Shepherd/Collie mix who was my family dog (and whose death when I was in high school is a day I will never forget). 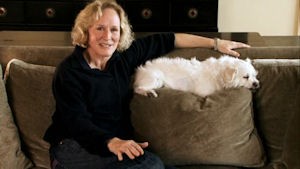 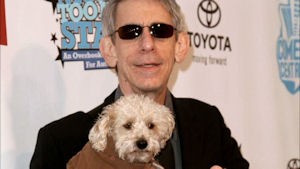 You can pretty much just plop me in front of a dog park and I'm set--as with horror films, my enjoyment bar with canines is pretty low (the Puppy Bowl is my favorite part of Super Bowl Sunday). So I still found plenty to enjoy with My Dog: An Unconventional Love Story, a 50-minute documentary that sadly wastes too much of its precious time. The film visits people who have garnered some form of celebrity in their profession, ranging from actors and athletes to musicians and writers. They briefly offer thoughts on their pets (often shown resting on a lap or roaming in the background) and champion the rescue effort (which it appears is how all of the contributors got their dogs). 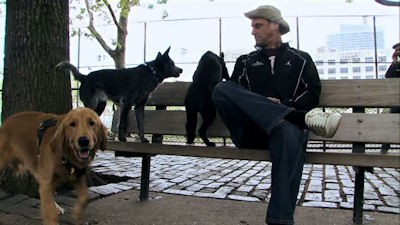 Richard Belzer says he spends about 24 hours a day with Bebe (yes, the dog who threw up on MSNBC's Morning Joe program), while Glenn Close talks about growing up with dogs as her two current loves play. Singer/songwriter/actress Nellie McKay--who likes to let her dog watch movies like Carlito's Way--says Charo is "kind of like a Latina Joan Crawford." But her exaggerated attempts at humor pale in comparison to New York Post columnist Cindy Adams, who appears to be practicing stand-up material revolving around Jazzy and Juicy, her two Yorkshire Terriers ("I've got more hair under my arms than she's got!" and "She's like a hooker! Whoever will take care of her, give her food, she'll go to!" are just a few of the exclamations channeling Joan Rivers). 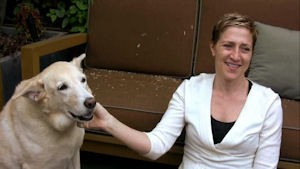 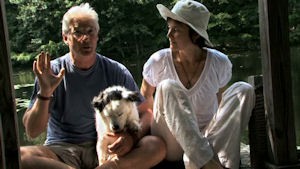 Director Lasse Hallstrom shows up (barely), as does entrepreneur Gayle Martz, who seems to primarily be pushing her Sherpa bags. Also on board are Richard Gere and spouse Carey Lowell, who get a little Zen--as does former New York State Superintendent of Banks Diana Taylor (Michael Bloomberg's spouse), who relishes her morning dog walks that allow her to escape stress and focus on what's truly important (she also admits to using her dogs as an excuse to decline social invitations from friends, a shameless ploy I have experienced first-hand).

It's all very cute, but so much of the material here is a little too superficial and obvious (unconditional love, therapeutic, yadda yadda)--and some of the contributors are boring. The film gives us too many humans and not nearly enough furry friends (love ya, Edward Albee...but can you cute it up a tad?). I was also annoyed that while the people are introduced with freeze-frame shots during their initial appearance on camera, their pets aren't. The dog names do appear in the closing credits (too late!), but their breeds are never identified--an oversight I'm kind of stunned by. 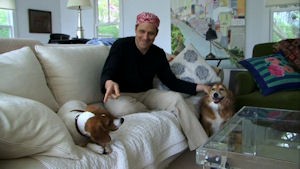 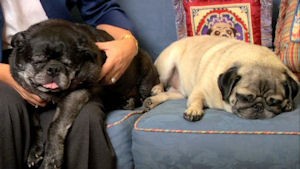 The film also jumps around too much instead of giving us extended periods with some of the more truly engaging stories (brief topics try to give the film a little structure, but basically it just goes from thought to thought). I could have done with a little less Isaac Mizrahi (a psychic told him that he and his "couture dog" Harry were nuns together in 17th century Spain!) and a lot more of veterinarian Amy Attas, whose blind Pug Leonardo is a story in need of more attention. And toward the end of the film when we get a Livingston Taylor song set to a droopy-eye montage reminiscent of Sarah McLaughlin's ASPCA commercial, even a diehard dog lover like me was a little exhausted. 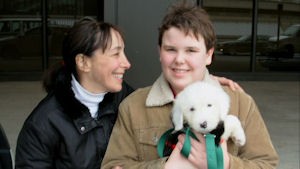 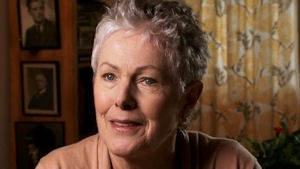 I'm not sure why director Mark St. Germain felt the need to squeeze so many people in such a small time frame, but the film is in desperate need of more minutes and fewer contributors. But all is not lost. Even though two of the bigger names here--Edie Falco and Chris Meloni--are underused, they still manage to connect a little better with their stories (Falco about how dogs made her more trusting, Meloni about the death of his family dog the day before he left for college--an experience all too similar to my own).

Then there's classical pianists Misha and Cipa Dichter, whose dog Thunder is the film's true star--his eyes and mannerisms steal every frame he's in, and you can practically see the thought bubbles above his head (more shots like this, please!). "It's very, very cruel. It's terrible to invest this much love in something so fleeting, but it makes it all the more rare and lovely," says Misha. "If you can't take loss, then you can't take love." 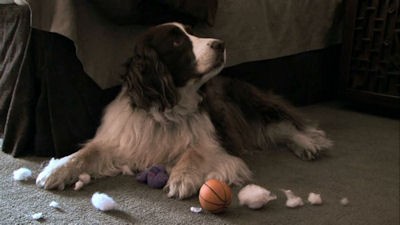 But the film really shines--and is saved by--its three slightly extended stories. Up first we peek in on Grease alum Didi Conn and husband David Shire, who discuss how dogs have contributed to the growth of their autistic son Danny (asks his dad in a back-and-forth joke session: "What do you get if you cross a Bulldog with a Shih Tzu?"). Then there's Olympic gold medalist Greg Louganis, who talks about his newfound passion as a dog agility instructor (something he enjoys far more than teaching divers). He is honest about the struggles he's faced, and even though he seems sad here (it's heartbreaking to hear some of his thoughts), you can still feel a spark inside--something given to him by his four-legged friends: "I don't want to be so melodramatic as 'reason to get up in the morning', but sometimes that's what it is." 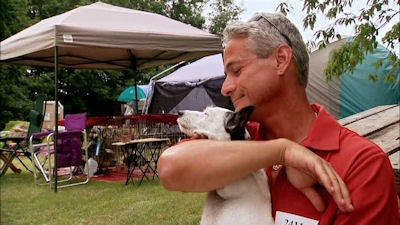 But by far the film's strongest moments come when Lynn Redgrave is on camera. The Oscar-nominated actress (she should have won for Gods and Monsters!) lost her battle with cancer earlier this year. She's open about her struggle here--and tells a great story about how and why she finally decided to get her own dog. There's such honesty and heart in Redgrave's words, and the joy in her face when talking about Viola--who brought purpose and passion to Redgrave in her later years--is palpable. "Dogs do have this understanding of somebody needing closeness or that they're going through something," she says. "I can't now actually really remember life before Viola. I'm sort of besotted with her, really. I could just look at her all day." The shots with the two looking at each other (those eyes!) are indescribable--and epitomize the powerful connection between dog and human. (What was that? I brushed off the "unconditional love" slobber earlier? Alright, I take it back! It's true! Now where are the Kleenex?!) 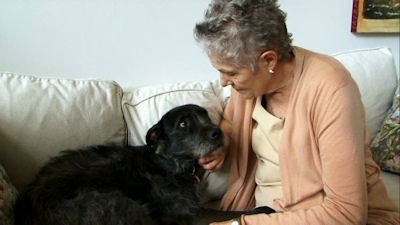 Then there's poet Billy Collins, the film's funniest two-legged contributor. His view of animal heaven: "The cats and all the other animals are hacks...they just write in prose. So they're all in heaven, but they're distinguished by literary genre." And for someone who's usually indifferent to poetry, I was surprisingly touched by his dog Dharma's beautiful composition (thankfully, Collins reads it for us, and I find it a fitting finish to this review):

As young as I look, I am growing older and faster than he;
seven-to-one is the ratio, they tend to say.

Whatever the number, I will pass him one day and take the lead,
the way I do on our walks in the woods.

And if this ever manages to cross his mind,
it would be the sweetest shadow I have ever cast on snow or grass. 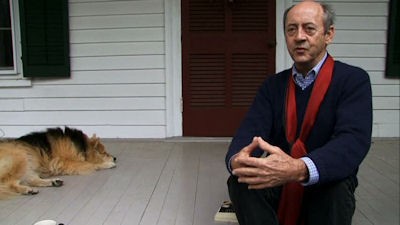 Video:
Considering this is a low-budget documentary, the anamorphic widescreen transfer looks pretty good. The overall colors and tone are a tad dull and dim, but many shots show nice detail.

Audio:
The 2.0 track is also perfect for the modest audio, which doesn't really rely on any sounds to sell itself (surprisingly, there are very few barkers and beggars here). 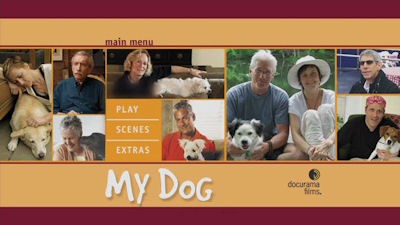 Extras:
A set of 13 deleted scenes/interviews (totaling about 17 minutes) could (mostly) fit into the documentary, and a few are worth the watch--especially the first one, a brief interview (2:36) with director Mark St. Germain and producer Daryl Roth (who also appears briefly in the film with her dogs). St. Germain notes that it was watching Richard Gere transform in front of his dog that first inspired the idea for the movie, while Roth stresses how dogs hold a vital escape for those in the public eye (a fascinating angle the film could have explored more). Also watch for the funny clip with Billy Collins reading a poem, an act that apparently bores his dog about halfway through. 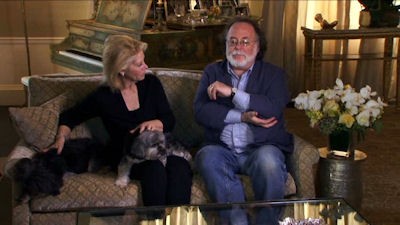 Filmmaker bios (on St. Germain and Roth), trailers and an "About Docurama Films" section round out the package.

Final Thoughts:
You won't find a bigger dog fan than me--I'm pretty content just watching them drool. But My Dog is a little disappointing, a slightly unfocused 50 minutes that jumps around too much and doesn't take advantage of its strengths. Not only do we not get enough of the pooches, but some of the contributors (all who have achieved some form of celebrity) don't have too much to say (to be fair, they don't have much time). Still, a handful of moving moments still make this worth a watch (especially for dog lovers), and the message of rescue is an important one. The Lynn Redgrave sequence alone is one of the most moving and memorable moments you'll see anywhere (it gets five stars), and a few others will put a smile on your face--or tug at your heart. Rent It. 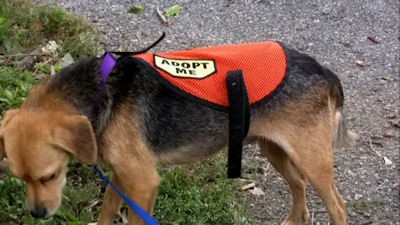