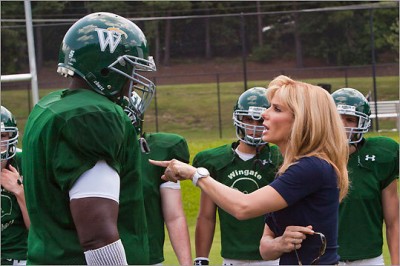 (The following was transcribed
from the hand-written notes* of an assistant present during a pre-production
meeting for The Blind Side attended by representatives from Alcon
Entertainment and Warner Brothers. Items have been numbered and
italicized for readability. My annotations are throughout. )

The book's full title is
The Blind Side: Evolution of a Game. Had Lewis's book been
fully adapted, telling the parallel tales of the young Michael Oher
and of Lawrence Taylor at the height of his game, it would have made
a vastly more interesting film. The significance that Lewis draws
from pairing these stories - about the nature of football and how
it has changed in recent years - is a sort of literary magic trick,
but without fakery.

This is an assumption by the
filmmakers that is set down without giving us any idea of what Memphis,
as a city, is like. Most of this film feels like it takes place
in Memphis in, perhaps, the 1950s. In fact, it's set within
the last decade. The racial attitudes that are portrayed do no
credit to white residents of that city. I am in no position to
say whether they are realistic. However, they certainly appear
simplistic, and for a city in which racial tension has been a defining
feature for centuries, it would seem as though finer nuance would exist
on the spectrum between racism and brotherhood. In fact, I'd
hazard a guess that Southerners generally hold a more mature, self-aware
grasp of the issue than, say, Californians. But in The Blind
Side, if you're white, you're either racist or angelically tolerant,
like the Tuohys, who take in a black teenager without much fuss.
The not-so-subtle racism of this movie is conveyed visually, too: if
you're white, you exist among glowing amber hues; if black, you live
in a perpetually cold steel-blue haze.

Bullock should have never relented.
It's a poorly-written role that calls for the following acting "challenges":
Bullock must maintain an out-of-fashion frosted hairdo; she must stay
chipper and aggressive and witty - you know, like Vicki Lawrence on
Mama's Family, except with a great ass. Also, she must,
at least once, restrain tears. How Bullock - who I won't deny
has a certain innate charm - won an Oscar for this thin stereotype
of a part is beyond my comprehension.

As the younger son, who goes
by SJ, Jae Head proves to be one of the most annoying junior performers
on film in a long time. He does look like Howdy Doody incarnate,
and I'd rather the producers had cast the marionette instead of this
grating child, whose incessant mugging and face-pulling is positively
bizarre.

John Lee Hancock is capable
of far better than The Blind Side. His much-maligned
The Alamo is a lot better than its reputation; his Dennis Quaid
baseball picture, The Rookie, is very strong; and his screenplay
for Clint Eastwood's A Perfect World is nothing short of outstanding.
(And his adaptation of the difficult Midnight in the Garden of Good
and Evil - also for Eastwood - wasn't bad, either.) So what
happened here? I have no clue, except to say that the film is
jam-packed with narrative shortcuts and clichés; it's a film that
suggests a minimum of pre-production and a very fast production schedule.
Everything is cursory, without attention to the details of character,
setting, or even the movie's broader themes. In short, it's
a hack job.

The Blind Side runs
128 minutes and feels like it's at least 50% longer than that.
The film's first half is very slow. Although further cutting
would not have solved the film's fundamental shortcomings, you could
easily cut 30 minutes without losing anything important.

The enhanced 1.78:1 transfer is bright and clear. It's a
2009 film, and it looks like it. Another fine image from the dependable
people at Warner Brothers.

The Dolby Digital 5.1 surround mix is strong and well-balanced.
Dialogue is up front, but both ambient and musical surrounds are used
appropriately.

There are seven minutes of Deleted Scenes. These don't
add anything of value to the already overlong feature.

The Blind Side is a
terrible film. Simplistic themes are handled without wit, insight,
or even a salutary glance at realism. Two key roles - Leigh
Anne (Sandra Bullock) and her son SJ (Howdy Doody) - seem to have
been performed by actors trying out for an after school special.
Bullock, an Oscar-winner? For this? For shame. And
the candy-ass antics of the young boy have to be seen to be believed.
The Blind Side is a racially-charged joke of a movie. You'll
think you've died and gone back to the Memphis that Dr. King knew.