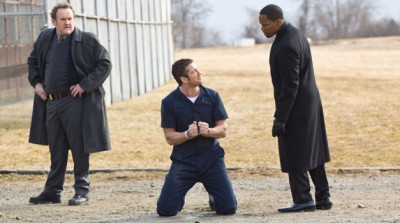 Law Abiding Citizen
begins as a serviceable, thematically-organized thriller that quickly
devolves into a grotesque and implausible revenge fantasy/nightmare.
After a relatively gripping 25 minutes or so, motivations and Law
and Order-style moral ambivalence go out the window in favor of
a pretty jacked-up series of events that turns Gerard Butler's character
into an unadulterated maniac. This seems to have been an unintended
consequence of the screenplay, which positions the first part of the
movie as a moderately thoughtful look at the unintended consequences
of justice poorly served.

Well-off engineer Clyde Shelton
(Gerard Butler) survives a home invasion, but his wife and daughter
do not. He stands by helplessly as Philadelphia Assistant DA Nick
Rice (Jamie Foxx) makes a deal that allows the killer to go free while
his accomplice gets the death penalty. Flash forward a decade.
Shelton has taken it upon himself to eliminate everyone connected to
the case, starting with the accomplice. Shortly thereafter he
locates the killer and hacks him to bits. Imprisoned, Shelton
proves no less dangerous or determined to exact vengeance. He
proceeds to murder the killer's lawyer and several others in the DA's
office. How he perpetrates these killings from within prison,
no one knows. It's a race against time at this point, as Rice
and Detective Dunnigan (Colm Meaney) struggle to put the pieces together
and stop Shelton.

The screenplay by Kurt Wimmer
holds at least a nugget of a good idea. The question is: what
happens when someone of means and intelligence is dealt an unjust hand?
How would such a person go about "setting things right"? Shelton's
purpose, supposedly, is to prove that the justice system does not work.
At least, that's how his path of destruction begins. But shortly,
it becomes, simply, a trail to Hell, with Shelton killing people left
and right. Director F. Gary Gray builds tension well, and we feel
that Shelton's resources and sharp mind could cause abominations at
any moment. But the film loses the thread of the interesting theme
that it sets up in the first half-hour, and as Shelton crumbles into
madness, character motivations become more simplistic and less compelling.

Foxx is well-cast as the arrogant
Rice, whose chief motive for making the fateful deal with the killer
of Shelton's family is to maintain a high conviction record.
There is solid supporting work from Leslie Bibb as another ADA and Bruce
McGill as DA Cantrell. These actors bring real feeling to small
roles that would have made the picture more interesting had they been
larger. As the psycho Shelton, Butler delivers a pretty one-note
performance that relies too much on a particular tone of voice.
The repetitive scenes of confrontation between Shelton and Rice suffer
from the unequal balance of Foxx's more shaded portrayal and Butler's
flat glowering.

Law Abiding Citizen
delivers short-term thrills that maintain a certain level of tension
until the picture's end. However, a number of twists do more
than just strain credibility. The explanation of the murders Shelton
commits from prison is ridiculous, and a bit of vague background about
Shelton thrown in toward the end of the film (that he was some kind
of "black ops" government contractor) is way too convenient and
contrived to be convincing. Despite the promise of its initial
premise, Law Abiding Citizen's generic thrills prevent it from
rising above the middle ground it ultimately chooses.

The enhanced 2.35:1 transfer boasts a crisp image with very deep blacks
amid a dark palette. This well-shot film (by Jonathan Sela) makes
good use of atmospheric lighting and production design. These
visuals are bolstered by a solid transfer that replicates the high-contrast
look without any obvious digital flaws.

The 5.1 Dolby Digital mix is active and punchy, adding much to the
film's scenes of action and violence. Surrounds occasionally
jump out at us from odd places, cranking up the tension when appropriate.
Ambient effects are plentiful, underscoring the visual atmospherics
in even the quieter sequences.

A small handful of extras are offered here. There is an
Audio Commentary with Producers Lucas Foster and Alan
Siegel, which includes a revealing and interesting discussion of
the movie's gestation from the production companies' point of view.
The Justice of Law Abiding Citizen
(6:17) is a short promotional piece that discusses the film's themes.
Law in Black and White - Behind the Scenes
(15:07) is a more traditional making-of piece focusing on director Gray.
Preliminary Arguments - Visual Effects Progressions (6:52) takes
us through a few key sequences in terms of the layering of visual effects
upon shot film. The Verdict
- Winning Trailer Mash-Up (1:06) appears to be nothing more than
an alternate trailer. There is also the Theatrical Trailer

Despite an assembly of able
filmmakers and performers, Law Abiding Citizen
winds up as a middle-of-the-road thriller that makes for a decent if
unmemorable experience. Rent it.