I Love Lucy: The Movie and Other Great Rarities

Paramount // Unrated // April 27, 2010
List Price: $19.99 [Buy now and save at Amazon]
Review by Stuart Galbraith IV | posted May 11, 2010 | E-mail the Author
In unexpected ways, I Love Lucy - The Movie is a fascinating DVD, even for those with only a middling interest in the perennially popular sitcom. The movie is just that, a bona fide theatrical feature cobbled together from three episodes of the TV series with new linking material, a feature film completed and readied for release but shelved at the last-minute and quickly forgotten. Though the three shows that make up the bulk of its running time are familiar, the linking material is a revelation, something like the Dead Sea Scrolls of TV sitcom history.

In addition to the 81-minute feature film, the DVD includes many "other great 'I Love Lucy' rarities," almost equally interesting. In short, this is a terrific disc. 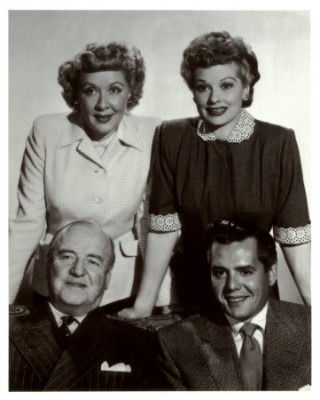 I Love Lucy the TV show was an immediate hit, the No. 3 show of the 1951-52 season and No. 1 for the three years after that, and in those pre-cable, pre-home video, pre-Internet days pulling in Super Bowl-level Neilsen ratings every week. Lucille Ball, who never quite solidified her career as a leading lady in the movies was suddenly hot again, and some of her earlier films for RKO, MGM, and Columbia were reissued to cash in on I Love Lucy's success. Ball's husband, co-star, and business partner, Cuban bandleader Desi Arnaz, had ambitious plans for their company, Desilu, which by the end of the decade he built into a mini-entertainment conglomerate, producing a small number of high-quality television shows and movies while renting its vast studio space (including the former RKO Studio lots in Hollywood and Culver City) to myriad outside productions.

In the beginning though, Ball and Arnaz modestly tested the waters with I Love Lucy (1953) a feature-length movie largely composed of three first season episodes: "The Benefit," "Breaking the Lease," and "The Ballet." The program was already shot and edited on 35mm film*, so preparing a theatrical feature version was largely a matter of removing their opening and closing titles and adding a minute or two of linking material between the three stories.

But there was one problem: I Love Lucy was filmed before a live audience, and their laughter was a permanent part of each episode's soundtrack. What to do? Comedy veteran Edward Sedgwick, who directed the new scenes, came up with a solution both crude and ingenious, and for television historians, ultimately priceless: A wraparound story was shot featuring an ordinary, middle-aged couple (Ann Doran and Benny Baker) who attend the filming of an episode of I Love Lucy. They arrive and take their seats along with the rest of the audience. Next a genial Desi Arnaz, out of character, welcomes the audience, gives "the lowdown on all this television magic," explains how the show is to be filmed, and introduces his co-stars. Some of this footage is staged, but what's on-camera is the real I Love Lucy soundstage (then shooting at General Service Studios in Hollywood) and Arnaz's amusing introduction - he makes a funny joke about the 35mm cameras that would sometimes obstruct the audience's view of the performance - is about identical to the real pre-show introductions he routinely gave.

In other words, to explain the laugh track on the feature version, the movie is explained as an actual performance by actors rather than movie "reality." The pre-show footage is fascinating stuff, a glimpse through a heretofore-lost "fourth wall," of a program engrained in virtually everyone's consciousness (like it or not).

The rest of the movie is pretty much what you'd expect, with the episodic nature of the enterprise impossible to hide. I haven't seen the half-hour I Love Lucy in at least 15 years, yet found the middle segment, "Breaking the Lease," pitting the Ricardos (Ball and Arnaz) against their landlords, the Mertzes (William Frawley and Vivan Vance), still quite funny. The first third, featuring "The Benefit" is also good, but "The Ballet," less so. (However, Arnaz can clearly be heard laughing offscreen at his wife's clowning during this segment.) "The Ballet" may have been chosen less for its laugh quotient than because of its musical-comedy number climax (at Ricky Ricardo's Tropicana Nightclub) and its production razzle-dazzle, modest though it is.

Officially, the movie version of I Love Lucy was shelved after just one test screening (in Bakersfield, California), supposedly because MGM had just signed the couple to star in The Long, Long Trailer (1954) and the big studio didn't want to have to compete with an upstart I Love Lucy movie. The latter was shelved and MGM's much bigger production (in color and CinemaScope) was released instead. Maybe, but another explanation seems possible.

I suspect Ball and Arnaz prepared the I Love Lucy movie mainly as a bargaining tool in their negotiations with MGM, and never really intended to release it at all. Where MGM's movie was a fairly pricey A-movie - probably in the $1.5 - $2 million range - the I Love Lucy movie had to have been extraordinarily cheap. The three episodes that make up about 75 minutes of its running time were already in the can, while the new scenes, all shot on the preexisting I Love Lucy soundstage and its sets, probably didn't cost more than $50,000 to shoot.

So, for an additional $50,000 investment Desilu had a theatrical feature all but certain to gross at least 10 times that figure, maybe much more. It therefore would have been a low-risk gamble for the couple to make the movie strictly for leverage with MGM, with whom they eventually made two expensive movies and perhaps received development money for other projects. This is pure speculation, but there are hints that this might be true, such as the fact that the I Love Lucy movie was completed early in 1953 while The Long, Long Trailer wasn't released until February 1954, more than a year later, thus lessening the unfair competition argument.

Besides the filmed-for-the-TV show episodes, the new footage also clearly was shot for 1.37:1 projection and is presented full-frame here. The movie looks great and should, considering just one print was made before now. The image is sharp, blacks are rich, etc. The mono audio is fine; optional Spanish subtitles are included.

The excellent selection of extras begins with a carefully researched colorized edition (with color home movies and production stills used for reference) of the I Love Lucy episode "Lucy Goes to Scotland," a Brigadoon-type extravaganza. I wouldn't want to watch the whole series this way, but it's novelty value is high.

A kinescope of Lucy and Desi's first-ever joint TV appearance is included, about three minutes of a Christmas Eve 1949 guest shot on The Ed Wynn Show. Ball has longer hair in this, and Desi can't stop laughing at Wynn's mugging, prompting the latter to ad-lib, "He should buy a ticket!" Another kinescope, from the Sixth Annual Emmy Awards (the earliest to survive), shows Vivian Vance winning a Best Supporting Actress award (presented to her by Richard Denning), and later Lucy and Desi claiming the prize for Best Situation Comedy, during which they generously credit their writers.

Finally, a series of on-set commercials is included, featuring actor (and later foreign-film dubber and prolific cartoon-voice actor) John Stephenson who asks, "Do you inhale?" The series was sponsored by Philip Morris, making the "Positively No Smoking" signs in the soundstage, coupled with the constant smoking on the show rather ironic, and the fact that Stephenson himself, required to puff away like his life depended upon it, had himself quit smoking six weeks before being hired as I Love Lucy's pitchman. One commercial shows the familiar set of the Ricardo's apartment from an interesting angle, showing off a window stage right of the fireplace.

All of this material is presented with detailed production notes and illustrated with film clips and captioned archival photographs. It's very well organized, easy to navigate, and highly informative.

This is a really fun disc, crammed with interesting artifacts, and a must for classic television fans. A DVD Talk Collector Series title.