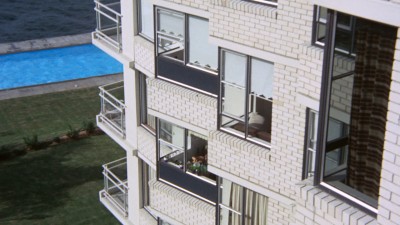 Walkabout adds up to
much more than the sum of its parts. A road picture, a clash of
cultures, a coming-of-age story - throwing these easy sub-genres around
doesn't even begin to get at what the film is really about.
It's about the development of minds in the context of their environment.
It's about how communication between people and cultures either works
or doesn't work - sometimes both at the same time, and for different
reasons. It's about human beings as animals, capable of experiencing
beauty, yet corrupted by their own need for artificial barriers.

Nicholas Roeg's film bears
a simple plot about English children lost in the Australian outback,
but the director enmeshes it with a host of cinematic devices - including
photographic, editorial, and aural effects - building a thematic cocoon
around the film that elevates it to that rarefied level at which one
cannot imagine the story being told through any other medium.
(I say this, despite the fact that Walkabout is loosely based
on a novel of the same name by James Vance Marshall.)

From Sydney, Australia, an
Englishman takes his two children on a picnic in the bush. As
they lay out the spread, he shoots at them with a pistol before setting
the car on fire and turning the gun on himself. Physically unharmed,
the children escape, the teenage girl (Jenny Agutter) valiantly concealing
the truth of what has happened from her much younger brother (Luc Roeg).
After a few days spent wandering the outback, the two meet an Aboriginal
boy (David Gulpilil), who joins them and, although ignorant of English,
teaches them a few things about survival in the wild.

The trio's time together
becomes a leisurely idyll, but as they draw closer to "civilized"
parts of the country, their collective experience begins to fragment.
The English siblings ultimately seek familiarity in the form of paved
roads, prefab buildings, and automobiles; the Aboriginal boy becomes
increasingly disturbed by their proximity to Western modernity.
A rather innocent fixation on the white girl devolves into a dejected
attitude and a protracted ritual dance. Although the English boy
and the Aboriginal boy develop a rude form of communication using hand
signals, the group's interaction is usually silent, and they suffer
from an inability to delve into more complicated matters.

Although the plot is minimal,
it's not exactly straightforward. A few key "unexplained"
features of the story raise some interesting associations, principally
the Englishman's suicide, which sets the main body of the film in
motion. We know almost nothing of the Englishman, his job, or
why he and his family have relocated to Australia. As to his suicide,
the film seems to suggest that there was something about Australia that
the Englishman could not handle - we see him striving to conduct himself
as an urban Londoner might, clad in a bowler and drinking tea.
Yet the picnic in the outback looks all wrong - a citified approach
to desert dining is a juxtaposition that cannot succeed. In this
oblique but effective way, we gain some understanding of the man's
state of mind.

Beyond the main plot strand,
there is a lot to consider. Walkabout's impressionistic
style is jam-packed with all manner of storytelling signals. Roeg's
use of cross-cutting alone (as when the Aborigine preparing to roast
a kangaroo haunch is intercut with a butcher hacking apart chops in
an antiseptic suburban shop) merits a closer look; this technique, which
can be overbearingly flashy in the hands of a less judicious filmmaker,
reinforces the relative alien-ness of differing ways of life.
The aural experience of Walkabout is equally striking, with frothy
amalgams of street sounds and animal screams sonically illustrating dueling horrors: aggressive city life versus nature's arbitrary judgments.

Confident, intuitive performances
have been coaxed from the three juvenile leads; rarely has a film about
children seemed so mature, complex, and, well, adult. Nudity abounds,
in a way that is in harmony with the characters' increased comfort
with their natural environment. Agutter and the younger Roeg behave
like real siblings, relying on and supporting each other with small
words and actions that reveal a deeper familial love. As the Aborigine,
David Gulpilil acts his role in the local language, and even without
the aid of subtitles, the performance has an assured beauty about it.

As it comes to an end, the
viewer will note a tingling sense of poetic completion, as the film
resolves its mysteries in a way that is well in keeping with its impressionistic
narrative style. Instead of giving
us expository information, the film somehow re-shapes its entirety through a
few deceptively simple images. Throughout the film, but especially
at the ending, there's something powerful and understated about the
way Walkabout portrays Western society's intense
dependence upon fantasy as a coping mechanism.

Criterion has released Walkabout three times now - on laserdisc
once, and on DVD twice. The image on this DVD is the best to date.
The enhanced 1.78:1 picture is an exercise in deep, controlled contrast.
The image is sharp, and very clean. Roeg's striking visuals,
often lovingly composed, are rendered with a realistic, film-like texture.
The transfer bears the sense of pride and polish we have come to expect
from Criterion.

The soundtrack has been given the same close attention as the image
transfer. The mono track is well-balanced and free of telltale
signs of age - hiss, pops, and the like. There are moments when
the track seems a bit overly loud, but I would assume that these are
intentional. For a mono track, it's one that is quite active;
I wonder, with all the sonic activity in Walkabout, if Roeg wishes
surround sound had been an option when he made it. As it stands,
the mono track works well.

The Extras
On the first disc, Criterion
has ported over the Commentary Track that previously appeared
on the laserdisc and earlier DVD releases of Walkabout. The track
features director Roeg and actress Jenny Agutter. Recorded separately,
their candid remarks make for interesting listening.

The second disc begins with
a new interview with Luc Roeg (20:50), the director's son,
who played the young English boy. Now a well-established film
producer, the younger Roeg has a number of perceptive things to say
about the film and the experience of making it. Next is a new
interview piece with Jenny Agutter (19:59), who speaks with great
admiration of Nicholas Roeg and of the production process, which she
remembers fondly.

The longest bonus is the feature-length
documentary Gulpilil - One Red Blood (56:07), by Darlene Johnson.
Made in 2002, it chronicles Gulpilil's career as an actor as well
as his continued and unflagging participation in his native culture.
It's a fascinating piece about a man who lives in one world while
making a career in another.

Walkabout is impossible
to forget. Its imagery clings to the mind. This is one of
those movies that demands discussion; not only is it a compelling work
of art, it is also a film that transcends - or refuses - the preconceived
boundaries of its own medium. Highly recommended.