Precious: Based on the Novel ''Push'' by Sapphire 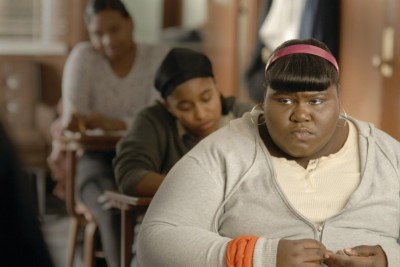 The awkwardly-titled Precious:
Based on the Novel "Push" by Sapphire is one of the most lauded
films of 2009, nominated for six Oscars, all in "major" categories
(including Best Picture). It is a portrait of urban life that
pulls no punches, detailing elements of our society often considered
unmentionable in mainstream films - abuse, incest, disease,
and other plagues related to poverty - sometimes hinted at but rarely
depicted in the fearless, straightforward manner of Precious.
The value of the film lies with this courage, and with that of its actors.
For all this, however, Precious can't help but feel like a
really rough after-school special - a movie about social problems
and a denigrated inner-city heroine who ultimately finds redemption.
While the plot and subject matter may ring true, the themes,
unfortunately, are trite, and despite the best efforts of a talented
cast, the film doesn't rise above them.

Sixteen year-old Harlem resident
Clarice "Precious" Jones (Gabourey Sidibe) is pregnant, for the
second time. And, for the second time, her father is responsible.
Upon discovering this, her school principal recommends that Precious
begin attending an alternative school for kids facing serious dysfunction
in their lives. The girl's shiftless, liquor-addled mother,
Mary (Mo'Nique), resents everything about her daughter, subjecting
her to torrents of verbal, physical, and sexual abuse. At the
new school, Miss Rain (Paula Patton) presides over a class of seven
or eight girls all trying for their GEDs. For the first time,
Precious learns to read and write. A social worker, Miss Weiss
(Mariah Carey), tries to get a handle on the girl's background and
circumstances, leading to confrontation with Mary over the long history
of abuse. Ultimately, Precious is resolved to sever ties with
her mother and complete her studies.

Precious is mostly carried
by its actors. In the lead role, Gabourey Sidibe is astonishing.
This part is her acting debut, and she is beyond impressive. At
no point does Precious feel like a character being "acted out."
Sidibe makes the film feel like a documentary. Precious has a
deep quiet, a stillness, and a lot of confusion about her identity and
worth as a human being. These hallmarks of deep trauma and abuse
are portrayed with a seamlessness that would be a feat for any actor,
no matter how experienced. Sidibe's slow awakening to self-awareness
is equally credible. Amidst all the talk of Oscars for Sandra
Bullock or Meryl Streep, Sidibe's performance, though also nominated,
is usually not considered a contender. I think it's easily the
best of the five.

On the other hand, Mo'Nique's
performance as Mary is considered the front-runner to win Best
Supporting Actress. And she deserves to win. Although many
of her scenes are characterized by incoherent rage, there are several
undeniably powerful moments, particularly during her final scene in
Miss Weiss's office. Here, Mary talks about the history of abuse
against Precious, and in the process reveals a painfully burgeoning
awareness of the consequences of her behavior. It's a pivotal,
deeply-rooted speech that requires much of Mo'Nique, and she delivers
with huge emotional force.

These two key performances
are helped in no small way by the supporting work of Paula Patton, Mariah
Carey, and the young actresses who play Precious's classmates.
Lenny Kravitz shows up for no apparent reason as a male nurse who attends
the birth of Precious's second child. Despite the very able
acting talent assembled here, Precious can't escape the familiarity
of themes and subject matter that have been treated over and over again
in countless memoirs and made-for-TV movies. The "uplifting"
finale, while avoiding the treacle of sloppier films, still feels forced.
After spending a good ninety minutes on the dire, disgusting, violent,
morally vacant environment that Precious has lived in for her sixteen
years, the movie takes us on a swift upward arc, wanting us to believe
that Precious is on her way up and out of the hell she has known life
to be up to that point. While things can only get better for our
heroine, the path seems a bit too smooth - or perhaps it's that
the film doesn't do enough to illustrate what the path really looks
like. Certainly things won't be easy for Precious, but we aren't
given too much indication of what she has ahead of her - only that
it will be better than Mary's place.

I wish in some ways that director
Lee Daniels and screenwriter Geoffrey S. Fletcher had taken a narrative
approach that was more strongly rooted in its characters. Instead,
this film opts for the common route of "social issue" films, which
is to suggest that monolithic external forces of good or evil can bat
our characters into good circumstances or bad, and that all Precious
needs to do is "choose" a better path, and the rest will take care
of itself. This attitude strips characters of individual integrity,
and despite Sidibe's outstanding performance, the writing betrays
the character, robbing her of the complexity that gives credit to the
notion that even people seemingly trapped in such inhumane ruts may
truly take charge of their lives.

Lions Gate presents Precious on DVD in an enhanced 1.78:1
transfer. The visuals have a high-contrast, washed-out look that
befits the decaying urban setting. Interiors are often lit with
fluorescents, or are totally dark and decrepit (Mary's tenement, for
example). The look is mostly gritty and depressing, and the transfer
replicates it well. There is occasional noise visible in scenes
with lots of detail, but generally this is a good, film-like transfer.

The DVD features English tracks in both Dolby Digital 5.1 surround
and in Dolby 2.0 stereo. Both tracks are excellent, although there
is not a whole lot of surround activity in this dialogue-driven film.
The 5.1 track features active music surrounds in a few scenes, and some
ambient effects. The stereo track is perfectly serviceable, with
clear dialogue.

The disc contains a few fairly substantial bonus features. Director
Lee Daniels provides an informative and impassioned commentary track.
He gushes to excess, however, which gets in the way of a detailed discussion
of the production. From Push to Precious (15:22) looks
at how the novel was adapted into a screenplay. A Precious
Ensemble (18:32) takes us into the casting process, particularly
the discovery of Sidibe. Oprah and Tyler: A Project of Passion

(9:31) explains how Oprah Winfrey and Tyler Perry - who are both interviewed
- came to serve as the film's executive producers. A Conversation
with Author Sapphire and Director Lee Daniels (8:27) is somewhat
redundant, but it's still interesting to witness the two major creative
forces behind the film talk to each other about it. Gabourey
Sidibe's Audition (2:33) is well worth a look. A single
Deleted Scene (1:45) is next, which shows Precious attending an
incest survivors' meeting. Reflections on Precious (1:00)
is bafflingly brief, while the Theatrical Trailer (2:32) wraps
things up.

Precious is a good film
that could have been much better. However, it does give us two
unforgettable performances, by leads Gabourey Sidibe and Mo'Nique,
both of whom deserve the Oscars they were nominated for. It's
a tough, brave film on a certain level, even though it fails to live
up to the promise of its characters. Recommended.