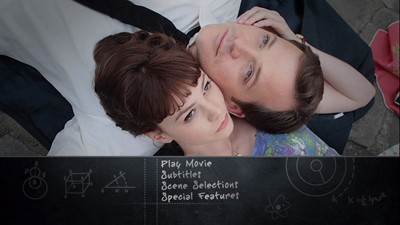 The new movie An Education is like the cinematic equivalent of a bad boyfriend--and I mean that in the best way possible. Based on a memoir by Lynn Barber, it's actually a film about a bad boyfriend, and director Lone Scherfig (Italian for Beginners, Wilbur Wants to Kill Himself) uses the pick-up technique of just such a scoundrel, seducing us into an exhilarating crush at the start, breaking our hearts by film's end.

More important than An Education being about this rotten boy, this is also a film about Jenny, the girl upon whose behalf our heart breaks. Played by Carey Mulligan (Bleak House) in a career-making performance, Jenny is a smart girl, too smart for England in 1961. Studying hard so she might get into Oxford in a year, the 16-year-old is tired of looking at the world from the safe vantage of books and her bedroom window. If she could wait a few years, she'd discover the whole of youth culture is experiencing the same malaise, but as of this moment, she's stuck at home. Her father, Jack (Alfred Molina), prefers a life of no muss, of no extraneous distractions. Everything must have purpose, and so Jenny plays cello in the local youth orchestra because it looks good on a college application, but dad would never let her waste the time to go see an actual concert. One gets the sense that maybe her mother (Cara Seymour) was once like Jenny, but she gave it all up to have Jenny.

Enter the boy, in this case actually an older man. David (Peter Sarsgaard) offers Jenny a ride home in the rain, seemingly with no concern for her age, talking to her about things she never hears about at home. He charms her, and then he charms her parents, and before she knows what happened, David is taking Jenny to hear classical music and meet his friends. It's all terribly fancy and altogether perfect, and so naturally, too good to be true. After a few times out with David, Jenny realizes that he's really a con man. The good life he lives is ill gotten, but moral relativism being what it is, he easily talks Jenny out of her initial indignation. It's only the first layer of the deceit, however, and Jenny will heed no warning--not from her teacher (Olivia Williams) or her school's headmistress (a wonderful cameo by Emma Thompson), and especially not her own nagging conscience. 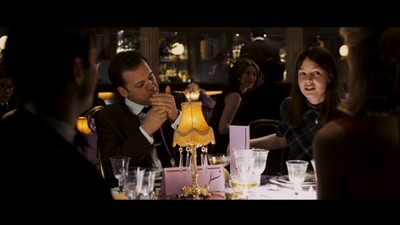 The script for An Education is written by novelist Nick Hornby, the author of High Fidelity and About a Boy and most recently Juliet, Naked. Though the easy pigeonhole people try to shove Hornby in is that he's a writer that primarily deals in male problems, such judgments misunderstand the writer's role as a human observer. Hornby's books aren't about boys growing up or growing old so much as they are about the state of change that comes at various times in life, about the realization that the way you thought things were are not how they really are. This is Jenny's predicament. She sees easy access into the sophisticated world she has been daydreaming about. No need to study. The normal route only leads to boredom and complacency.

I will give the literary critics this: Hornby's particular insight into the demented male ego means he is perhaps more sympathetic to David than another scribe might be. David is another of his little boys who won't grow up; hence chasing schoolgirls and then making them talk babytalk to him. Peter Sarsgaard has played his fair share of creeps in his day, but David is one of the creepiest. Thankfully, the movie never takes time out to moralize about his creepiness, the judgment is too obvious anyway. A smart movie like An Education and a smart director like Lone Scherfig just let him be who he is, it's much more vivid that way. Plus, with Saarsgard in the role, you risk removing that special oogey layer of vulnerability the actor adds to it. Go back in time and make this movie fifteen years ago with Hugh Grant, and David would have been a slimeball of the highest order. Instead, Sarsgaard makes him pitiable. The last time we see the character, he's drinking whiskey and crying in a car, and damnit, I kind of felt sorry for him.

Excepting the very last scene--An Education joins a legion of films that would have been stronger if the final dissolve came two minutes earlier--Hornby and Scherfig don't allow for any easy emotional outs. Jenny has screwed up royally, and it affects everyone. Alfred Molina is splendid as her father, so comically overbearing, so sure of his ways, and yet so shattered by the end. He's one of those actors who is capable of going over the edge and moving from character to caricature, but he stops just in time here. You laugh at Jack, but he's never a joke. On the other hand, Cara Seymour is so restrained in her role as Jenny's mother, it would be easy to undervalue her. Both the writer and director show a great trust in their performer, and in turn all three end up trusting their audience to see that there's something going on with Marjorie, that when she's being quiet in the background, she's not just being quiet in the background. She's yearning for a better life for her daughter while remembering the life she might have had herself. 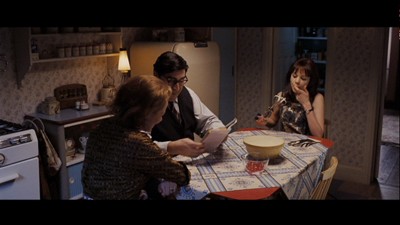 Of course, An Education would be nothing without Jenny, and this is Carey Mulligan's movie all the way. She is in every scene, leading the way through this unfamiliar terrain, informing us of how we should react. The girl is funny, shy, fierce, and eager, and Mulligan is not just capable of playing all those emotions, but sometimes more than one of them at the same time. Here is an actress who knows how to work with her eyes, contradicting her own brave face by showing the fear and disappointment that lies behind it. I suppose it helps that she is not so well known that we have a tabloid persona to get in the way, but even suggesting that seems too dismissive of a real talent.

As a director, Scherfig is an actor's dream. She largely stays back, letting the material and the performance do the work for her. A former participant in the Dogme movement, she has no insistent style, no flashy moves, but rather dresses a conventional mis-en-scene in quiet gray. I suppose this could be why An Education has received some mixed critical notices so far, that less patient reviewers are waiting for the film to sit up and insist we take notice, but that would be another case of missing the mark. In fact, to suggest that the movie lacks style isn't quite right either. If I had to place a bet on a particular influence, I think Scherfig and cinematographer John de Boorman (Miss Pettigrew Lives for a Day) have based the look of An Education on the kitchen sink dramas that would have been playing at the cinemas in Jenny's neighborhood. Black-and-white, everyday stories lacking in hope; compare the Paris sequences, which are far more colorful and freewheeling, much like the Kitchen Sinkers' Nouvelle Vague contemporaries.

What can I say? An Education just hit me in all the right ways. Its chilled confidence, the smartly written characters, the natural way in which the actors conduct themselves--all of these factors contribute to a coming-of-age tale that carries actual weight. As a genre, it's one that is very easy to do by the numbers. The commonality of the teenage experience means certain marks are going to be hit over and over again, and though Jenny experiences some of the same pitfalls as other girls her age, the way she tumbles and the way she climbs out doesn't feel like what we've seen before. Even as the girl discovers she can be just as dumb as any other fickle adolescent, An Education shows us that she really isn't. 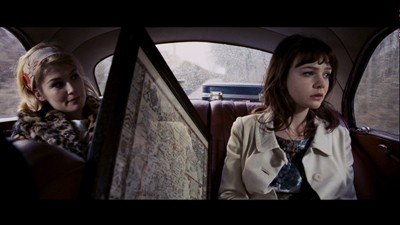 Video:
An Education was shot with a wide frame, and the 2.35:1 aspect ratio is used perfectly to emphasize the changing states of intimacy and distance. The anamorphic transfer on the DVD is fantastic, with good colors and sharp lines. No complaints.

Sound:
The English soundtrack is mixed in 5.1, and there is a rich atmosphere, balancing out the ambient noise of quieter moments with the louder nightclub scenes. There are optional French subtitles as well as English Closed Captioning. 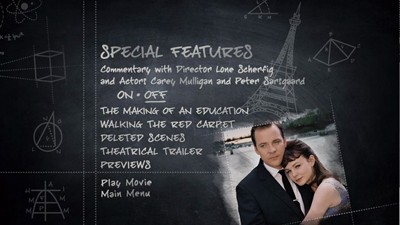 Extras:
The bonus section leads with an audio commentary with director Lone Scherfig and actors Carey Mulligan and Peter Sarsgaard. It's a dry conversation, with plenty of pauses, and mostly spurred on by "Oh, I remember this scene." It yields some good anecdotes, and the tone is friendly, but it's pretty skippable. Likewise, the 9-minute making of is fairly standard, with cast and crew chiming in, including both the original author Lynn Barber and screenwriter Nick Hornby.

"Walking the Red Carpet" is just over 8 minutes from the Los Angeles premiere, with interviews with the cast and crew, as well as shots of all the celebrities who were in attendance.

Deleted Scenes round out the substantial extras. There are 11 in all, just over 16 minutes, mostly connective tissue and nothing that anyone should have missed from the finished product. Emma Thompson fans might appreciate the added scene where she scolds Jenny and her friends for smoking, though; also, an alternate take with Sally Hawkins. There are additionally a couple of nice snippets showing Jenny's life after she has left school. The last excision is a reunion at Oxford that would have been too much and probably would have made me dislike the ending even more. Good cut, that!

Finally, there is a theatrical trailer for An Education, as well as other previews.

FINAL THOUGHTS:
An Education was one of the treats of 2009, featuring a stand-out performance by Carey Mulligan (my vote for the Oscar) as a teenager in the 1960s whose ennui leads her into a romantic, yet ultimately troubling, world. Peter Sarsgaard plays the lothario that beckons her down the wrong path, and a pitch-perfect script by novelist Nick Hornby and smart, meticulous directing by Lone Scherfig make for an emotionally resonant coming-of-age tale. More than Highly Recommended. 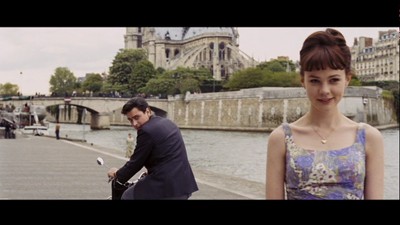