There are a few things I'm resigned to never seeing materialize: a competent "Highlander" sequel, a sincere performance from Kristin Stewart, and a modern horror film photographed and edited with imagination. Of course, "Andy Griffith in a senior citizen sex comedy" used to be on this list, but then "Play the Game" came along. Truly an oddball motion picture, "Game" is one part smutty romp, one part romantic comedy, with the entertainment value of the feature resting solely in how uncomfortably blunt it can get. Honestly, movies like this do not come along every day, making the film a welcome oddity; that is if one can stomach watching an American acting legend make his "O Face" while receiving oral sex from the woman who once played Jerry's mother on "Seinfeld." 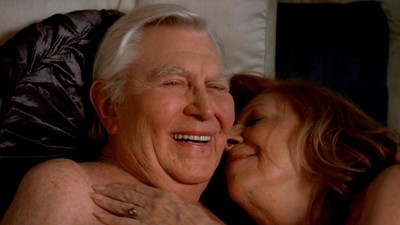 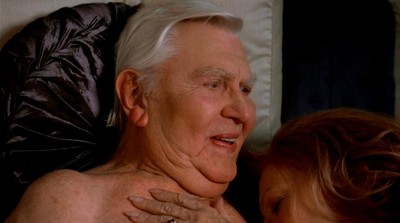 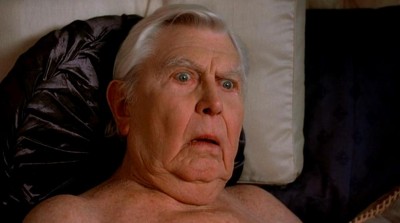 A slick-talking bachelor who enjoys the art of picking up women, David (Paul Campbell, "Battlestar Galactica") has decided to help his grandfather Joe (Andy Griffith) find companionship again after the death of his wife. Showing Joe the ways of elaborate seduction, David hopes to offer his grandfather a new social venue. Instead, Joe discovers the miracle of Viagra, taking off as a Don Juan of his retirement community. With Joe scoring left and right, David is learning a more difficult lesson, finding his charms and schemes unable to convince acquaintance Julie (Marla Sokoloff) to turn their friendship into the relationship David never knew he wanted.

"Play the Game" isn't an easy recommendation to make. In fact, I'm not sure I would eagerly push anyone toward it without a clear explanation of the experience to come. Written and directed by newcomer Marc Fienberg, "Game" is a perfectly suitable sitcom experience that endeavors to liven up senior living traditions with a little playful sexuality, not unlike Susan Seidelman's similar 2006 film, "Boynton Beach Club." While unquestionably edgy in a bizarre way, I never found "Game" offensive. Actually, the picture is quite approachable and occasionally scores a laugh. Fienberg directs loosely but effectively, drawing together these diverse characters for broad situations of romantic failure and bedroom triumph. Again, a certain spiritual fluidity is required to embrace the shenanigans, but the bravery is rewarded with some decent-sized giggles peppered around the picture.

Also enriching "Game" is the cast, who make Fienberg look competent with their startlingly confident performances. Campbell makes for a steady lead, charismatically guiding the film through the narrative nonsense while the rest of the ensemble has more fun with the slapstick. Campbell generates faint sparks with the radiant Sokoloff, who also shows admirable dexterity with the low-heat screenplay. The security of youth in the romantic comedy department is comforting, but "Game" is truly Griffith's picture, giving the legend ample room to ham it up as the horndog senior looking for love in all the wrong places. It's a treat to watch Griffith really dig into the questionable role, supported well by the rest of the eager senior troupe (including Doris Roberts, Rance Howard, and Liz Sheridan).

The anamorphic widescreen (1.78:1 aspect ratio) presentation has some difficulty with EE issues, leaving the image a shimmery mess at times, with needed detail scooped away. Colors fare much better, with a comfortable push of reds to keep the romantic atmosphere alive, with skintones are well preserved across a diverse range of faces. Black levels also hold their place.

The 5.1 Dolby Digital sound mix works for such a low-budget film, with the track sticking primarily to frontal atmosphere and sound cues, with minimal surround activity. Dialogue and slapstick hijinks are maintained comfortably, offering the listener a lively blend of madcap and dramatic, acceptably separated from the scoring. It's not dynamic by any stretch of the imagination, but the track retains the intent of the film well. A 2.0 track is also offered.

"Deleted Scenes" (11:44) offer David in prime car salesman mode, more game of love antics from Joe, a strange bit with an aggressive taxicab driver, and a post-shower dance party led by David. Nothing substantial and nothing funny.

"Outtakes" (4:45) is a routine of mix-em-ups from the cast, enlivened by Griffith's hearty sense of humor.

And a Theatrical Trailer is provided.

With spicy content that could really turn off much of the target demographic, it's a shame Fienberg doesn't go all the way with his screenplay. "Game" switches to robot mode in the final act by introducing sludgy melodrama, adding a sense of gravity to the movie that wasn't there before. Being Fienberg's first film, the fear of originality is understandable. Still, when a filmmaker is able to sweet talk someone like Andy Griffith into what amounts to be a cheeky Benny Hill-like role, I don't think it's unreasonable to expect a little more invention behind the camera to match the cockeyed casting.