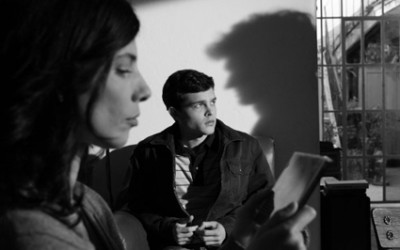 Francis Ford Coppola's
Tetro is a beautiful surprise. This film flew under the radar
during its initial, limited theatrical run, and was recently released
on DVD and Blu-Ray without fanfare. Over a career of extremes,
Coppola has created at least four unquestioned masterpieces (all in
the 1970s), several entertaining, moderately-successful pictures (mostly
in the 1980s), and a handful of flops (mostly in the 1990s). These
highs and lows have made Coppola unpredictable from a Hollywood perspective,
and had a direct impact on Tetro being a low-budget ($15 million),
independently financed production. Coppola has been forced by
his excesses to efficiently channel his huge talent and the result is
a controlled, polished movie that tells an exciting, moving story.
To those who doubt the great man as a bigger-than-life auteur who turns
his film projects into enormous resource-drains, Tetro should
prove that he retains all of his filmmaking skills after a couple of
shaky decades.

17-year-old Bennie Tetrocini
(Alden Ehrenreich) tracks down his long lost brother Angelo (Vincent
Gallo) in Buenos Aires, but Angelo - now known as "Tetro" -
isn't exactly thrilled to see him. For the last decade, Tetro
has cut off all contact from his family, starting a new life in Argentina
with his common-law wife Miranda (Maribel Verdu). Bennie is dumbfounded,
having had only a single letter from Tetro since he left home, one that
promised to come back for him someday. Needless to say, that never
happened, and Bennie is somewhat bitter. But Tetro has changed;
he crankily refuses to explain himself or talk about their shared family
with Bennie. When Bennie discovers Tetro's unpublished (and
autobiographical) writings, he unlocks their tortured family history.
Bennie writes a play based on Tetro's work, which brings their touchy
relationship to a head.

Filmed in beautifully modulated
black-and-white (with flashbacks and dance sequences in color), Coppola's
family story is consistently compelling and marked by a capable set
of performances. Coppola's command of atmosphere is just stellar
here; working with photographer Mihai Malaimare, Jr., and editor Walter
Murch, he creates a noir paradise out of the film's Argentine locations.
Delicately-arranged lighting and shadowed exteriors lend a mysterious
weight to Tetro's commitment to self-destructive secrecy. The
formal polish of the movie also suggests a bygone era of classics like
Casablanca and The Third Man - both of which also dealt
with characters trying to escape their pasts. Along with direct
references to the work of Powell and Pressburger (especially The
Tales of Hoffman), Coppola's visual approach is heightened, operatic,
and supremely stylish.

As Tetro, Gallo, whose presence
is at first odd and off-putting, tries hard to rise to the challenge
of his inward, contrary character. Tetro has modeled his new identity
as a man of mystery - an obscure, opaque "writer" who hasn't
published anything. But he's also in great emotional pain, and
at first, we don't exactly understand why. Gallo is good in
the role, but not quite as good as he needs to be. Tetro's personality
is supposed to be hidden for much of the film, but Gallo is overly emotive,
telegraphing the hidden parts a bit too early. (Gallo can't
be blamed for this alone, as Coppola should have been able to better
manage his actor.)

As Bennie, the younger brother,
Alden Ehrenreich delivers a very authentic sense of burgeoning maturity.
Like Tetro, Bennie has essentially removed himself from the family.
After escaping military school, Bennie has sailed around the world as
a steward on a cruise ship. His only familial interest lies with
Tetro, who he tries desperately to connect with.

Coppola's original screenplay
builds bold characters and places them in an exotic setting conducive
to a sense of unpredictability. Intertwined themes of family,
betrayal, jealousy, and creativity are familiar, but are given new life
through the prisms of these compelling brothers. Interpretive
dance sequences that "show" Bennie's vision for his play serve
as a unique way of portraying the creative process at work. The
outstanding score by Osvaldo Golijov weaves a Tango-inspired soundscape
throughout the picture, lending a sensual air to the whole experience.

Lions Gate's anamorphic 2.35:1 transfer is very strong.
This black-and-white film's photography is moodily lit, with close
attention to gray values and the arrangement of shadows. The transfer
shows off the glossy, old-school visuals with rock-solid blacks and
carefully-shaded grays. A very good job.

The sole audio choice is a Dolby Digital 5.1 surround track, and
the very active, immersive sound design by the brilliant Walter Murch
is served quite well. Dialogue and music are of chief importance
on the mix, and they are well-balanced. Ambient effects are slightly
more prominent in the mix than in the average film, and at times they
are used in an eerie, impressionistic way (the flapping of moths'
wings, for example). It's a very lively, colorful soundtrack.

First up is a full-length commentary track by writer-director
Coppola and lead actor Ehrenreich. The track is dominated by the
effusive enthusiasm of Coppola, who loves his craft and enjoys talking
about it. Several short behind-the-scenes featurettes follow,
totaling about 45 minutes.

Despite a lack of fanfare around
its release, Tetro marks a master's return to world-class filmmaking.
This complex, visually inventive film is propelled by two intriguing
characters. Performances are involving, and the film is technically
masterful. Highly recommended.