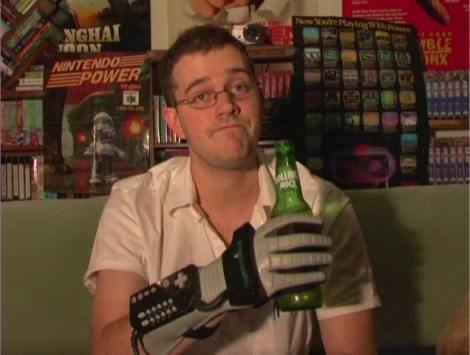 The history of AVGN began like most other soon-to-be-successful projects: just for fun. Rolfe shot "Castlevania II: Simon's Quest" and "Dr. Jekyll and Mr. Hyde" circa 2004, if only for the amusement of himself and his circle of friends. Giving in to peer pressure, Rolfe completed "The Karate Kid" in 2006, happy with what he eventually referred to as "The Angry Nintendo Nerd Trilogy". Peer pressure continued, YouTube uploads ensued and, before Rolfe knew it, The Angry Nintendo Nerd (later renamed The Angry Video Game Nerd, most likely to avoid potential copyright issues) morphed from a hobby into a part-time job. It's now a regular fixture at Rolfe's Cinemassacre.com (in association with ScrewAttack.com and GameTrailers.com), a blog/video archive featuring his short films, movie reviews and other projects---and more often than not, he uploads a brand-new installment of AVGN every other week.

Of course, a PayPal "Donate" button can't pay all the bills. Fans looking for modestly-priced souvenirs have undoubtedly come across Angry Video Game Nerd DVD collections; three are currently available, and Volume 1 covers All Things Nerd through the end of 2006. Though casual fans may want to stick to the website (and new fans, likewise, can test drive a few episodes), those looking to support Rolfe in this way should consider Volume 1 a pretty fair deal. At less than $15 for more than three hours of total content, it's an easy way to ensure that more episodes get made. Here's what this two-disc set includes: 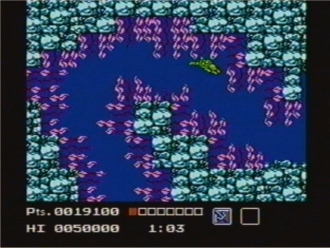 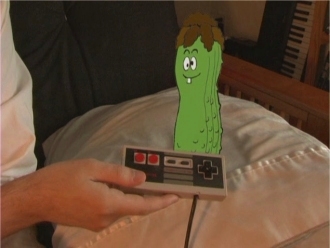 
Surprisingly enough, even the earliest incarnations of AVGN are nearly identical in format to more recent episodes; aside from slightly more sophisticated effects and broader game coverage, not much has changed. With this representing the earliest days of The Nerd, though, Volume 1 sees a number of firsts that would soon become tradition. "Castlevania II: Simon's Quest" is notable for not showing The Nerd's face; it's basically just him speaking over the recorded game footage. From "Dr. Jekyll and Mr. Hyde" onward, his potty-mouthed, Rolling Rock-swilling onscreen persona is pushed front and center. Episode #5, "Teenage Mutant Ninja Turtles" (above left), is the first to feature a hand-drawn title card (by Rolfe's friend and frequent collaborator, Mike Matei) and also the first to be hosted on ScrewAttack.com. "M.C. Kids" introduces the infamous theme song by Kyle Justin (featuring a few lyrics taken from the previous episode, "Back to the Future"). The epic, Halloween-themed "Friday the 13th" (below left) and "A Nightmare on Elm Street" are the first to employ a more theatrical presentation style, which proved to be a refreshing break from the norm.

Other reviews like "The Power Glove" and "Chronologically Confused: Movie/Game Sequels" also broadened The Nerd's horizons. No longer were his reviews limited to games, 8-bit or otherwise: peripherals, films and game-related merchandise were now thrown into the mix. This would prove to be a natural extension of AVGN's particular brand of humor, though the verbal destruction of 8-bit games will always be part of his mission statement. We're also treated to a few interesting history lessons along the way; it's obvious that Rolfe loves documentary-style filmmaking, and he seems to have a real knack for it. This is especially evident during the Christmas-themed "Bible Games": it's the longest review on Volume 1 at just over 20 minutes and digs up plenty of dirt on several rare, unlicensed NES and SNES games with morally ambiguous origins. It's arguably the best of the bunch, combining The Nerd's trademark rants with plenty of detective work on the side, and we'd see more reviews in this style soon enough.

The only disappointment with this collection, of course, stems from the removal of several movie clips and music cues...even though the videos appear uncut over at Cinemassacre.com. The edits won't be noticeable to first-time viewers, but die-hard AVGN fans should spot most of the differences easily (the pitch-perfect movie clips from Back to the Future, for example, are sorely missed). This editing is understandable, given the legal circumstances, but it still takes the overall recommendation down a notch. All things considered, though, The Angry Video Game Nerd, Volume 1 is a solid first entry in Rolfe's ongoing barrage of vintage game roasts. This modestly-priced collection also includes a decent technical presentation and a handful of extras, some of which are exclusive to this release. 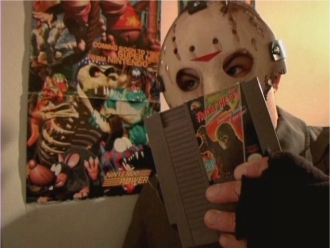 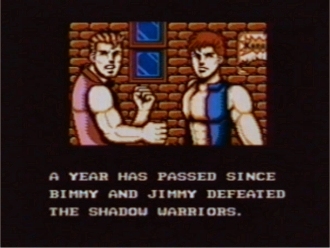 As expected, these episodes are rough around the edges...but considering AVGN was just finding its legs on a shoestring budget, they don't look half bad. Presented in their original 1.33:1 format (a no-brainer, considering the aspect ratio of the vintage games), these episodes appear to have been taken from video masters; recorded game footage is soft, while just about everything suffers from mild edge enhancement. Interlacing is also a minor problem, but the series' natural color palette is generally rock solid. Overall, these certainly look better than their online counterparts, but fans shouldn't put their expectations too high.

The audio is also low-key, presented in a relatively plain-wrap 2.0 Stereo mix...but don't worry, it gets the job done just fine. The Nerd's rants and other smart-ass comments come through loud and clear, while most of the game footage doesn't have to fight for attention. Things obviously improve as the episodes progress, but there aren't many problems to report here. Unfortunately, no optional Closed Captions or subtitles have been included; not surprising, given the circumstances, but still a mild disappointment.

Seen below, the mildly animated menu designs are fun, profane and highly appropriate, though the review titles will be tough to decipher if you're not familiar with the cartridge artwork (below right). A handy "Play All" option has been provided for the reviews---and honestly, AVGN is one of the few series where I'd actually consider this option. Each of these 17 reviews are presented without chapter breaks, while no layer changes were detecting during playback. This two-disc set is housed in a standard black hinged keepcase; no inserts are included, but a complete list of contents has been printed on the back cover. 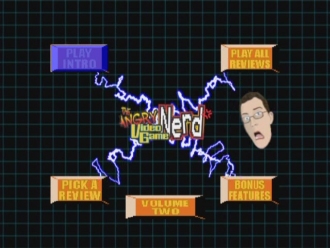 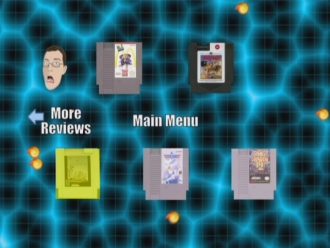 Spread across both discs, we're also treated to a number of light, entertaining extras. Leading off Disc 1 is "What Was I Thinking?" (13:08), a brief history and behind-the-scenes look at AVGN. Hosted by James Rolfe, this featurette takes a look at Rolfe's pre-AVGN creations, character trademarks, visual effects, fan reactions and more. Other participants include collaborators Kyle Justin (theme song, additional acting) and Mike Matei (art, additional acting). On a related note is "The Anger Begins" (1:28, below left), a self-narrated clip of Rolfe's formative---but still angry---gaming years.

Closing out the first disc is a series of review-related goodies. Of particular interest is a quick Bonus Review for the NES game Duck Tales (1:42), which finds The Nerd in rather good spirits; it's not hard to believe, since that game was pretty awesome. We're also treated to a short Deleted Scene for "Chronologically Confused" (1:05), which was excised for *ahem* factual reasons. "AVGN's 2006 Top 10 Moments" (3:56) is exactly as advertised; there's nothing new here, so consider it more of a theatrical trailer. Finally, we have "The Fuck Reel" (0:47), a non-stop barrage of selected profanity from the first 17 episodes. Also tucked away on the bonus menu is a Demo Reel (1:46) of Rolfe's other work, which includes animation, visual effects and cinematography samples.

Disc 2's odds and ends are a little less involving, but there's still some good stuff here. Kicking things off is the Original Intro by Kyle Justin (0:39), back when Rolfe's alter ego was still known as The Angry Nintendo Nerd. "Wii Salute" offers a layman's history of video game console wars until the launch of the soon-to-be-released Nintendo Wii, while "Toilet Video" (0:35) offers a satirical take on the popular "Nintendo 64 Christmas Kid" video that made the rounds a few years back.

Also here is a short but sweet GameTrailers Interview (4:02, below right) with Rolfe and Justin, who manage to stay in character during this fluffy but entertaining Q&A. Also of more interest is a collection of Outtakes (14:23) from selected episodes, as well as on and off-set goofing from the GameTrailers interview mentioned above. Closing things out are "The Shit Reel" (1:01), a self-scrolling Gallery of fan-made artwork (2:34) and a Music Video Remix of the theme song by fans Dustin Abmuteit and DarkSol (3:18). All things considered, it's a decent little pile of extras---and since some of these are exclusive to the DVD release (or, at the very least, tough to dig up online), it's nice to have everything in one convenient package.

All bonus features are presented in a mixture of 1.33:1, letterboxed and anamorphic widescreen formats, while none include optional Closed Captions or subtitles. 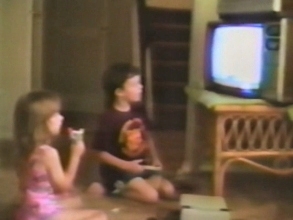 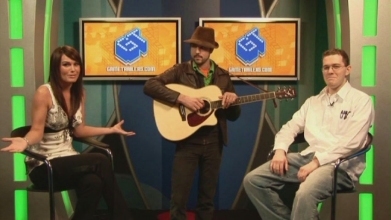 If you've ever sworn at a game console or thrown a controller in frustration (especially before 1990), The Angry Video Game Nerd should be right up your alley. Volume 1 is already several years old and the episodes can be found at Cinemassacre.com, but this entertaining two-disc set is a great way to support its creator, James Rolfe. Though some of the movie clips have been understandably removed due to rights issues, these episodes are just as profane, irreverent at enjoyable as ever. This DVD package offers a modest amount of support, pairing a decent technical presentation with a handful of entertaining bonus features...some of which are exclusive to this release. Available on its own or in several different money-saving bundles, The Angry Video Game Nerd, Volume 1 is a solid release that *ahem* irate gamers should certainly enjoy. Firmly Recommended.