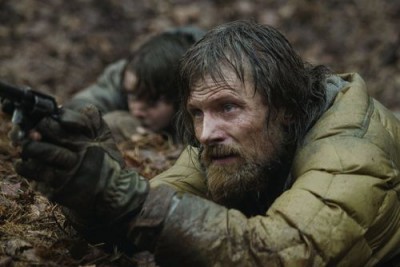 John Hillcoat and Joe Penhall's
film adaptation of Cormac McCarthy's Pulitzer Prize-winning novel
visualizes all of the bleakness of the original book and captures some
of the emotional impact. But it lacks that central special ingredient
that made the novel so important and so memorable: McCarthy's language.
This is an instance of a faithfully-adapted film unconsciously slitting
its own throat vis-à-vis the limitations of its medium.

A vaguely-described holocaust
has left the world enveloped in what appears to be an ash-glutted nuclear
winter. A man (Viggo Mortensen) and his son (Kodi Smit-McPhee)
are among a very small number of human beings left roaming the earth,
desperate for food, shelter, and warmth. Each day comprises a
new set of life-threatening challenges, and each night is filled with
black dread. Other survivors tend to be murderous cannibals, shown
hunting down victims like crazed zombies.

The Road has a minimal
plot. The book can be read in a sitting, and frankly, there just
isn't enough there to justify a two-hour film. (A 90-minute
version of The Road would have been far more compelling.)
But the issue of length pales when measured against the issue of voice.
Cormac McCarthy is a unique stylist, and his narrative voice is a large
part of what makes his books work so well. Knowing this, filmmakers working from a book
may choose to emphasize some aspect of the story that does not depend
upon the power of language to convey its significance. By necessity,
an adaptation must do something cinematic that a book cannot.
In the case of The Road, the visualization of this post-apocalyptic
world and its wasted landscape could serve as an illustrative "version"
of the narrator's voice - showing us what the book must describe
in words.

Yet director Hillcoat and screenwriter
Penhall chose to do a fairly straight adaptation of the book - faithfully
translating the plot, dialogue, and situations in a workman-like manner.
The resulting film is not bad, but it is more of a companion piece to
the book than a new version of the story that stands on its own and
has its own strengths and merits. Because it attempts to capture
the whole book, the film fails to successfully address any of it.
The massive emotional momentum of the book and the heartbreaking ending
feel oddly neutered here for reasons I can't quite pinpoint.

Although visually ambitious
on the surface, The Road doesn't quite succeed in that department,
either. Color has been leeched from the images, rendering them
a dusty gray. But it's monochromatic to the point of blurriness.
The low-contrast images hardly bear more than a single value - even
less than the average black-and-white film. Had The Road
been shot in black-and-white, images could have had greater contrast,
shadow, and detail, while retaining the otherwise appropriate lack of
color.

The performances are strong,
but somehow fail to convince; even the great Viggo Mortensen seems to
be struggling against an incomplete character. Since the film
wishes to "do it all" in adapting the book, there is a lack of focus;
characters feel a little diffuse in both the internal and external conflicts
they face. The man wants the boy to survive - but why, exactly?
There are a couple of scenes in which the boy reacts to the man's
behavior toward others - and there is a suggestion that the man's
need to keep the boy alive in a dying world has turned him into a quiet
maniac, unable to cope with the rest of humanity. These scenes
hint at a powerful idea: if we cannot behave humanely towards others,
what good is living? Unfortunately, this is only touched on in
the latter part of the film. It is yet another aspect of The
Road that fails to achieve its goal.

As I mentioned in the review above, the visual style of The Road
is dull. It's flat, gray look leaves scenes looking like fuzzy
etchings. The enhanced 2.35:1 transfer is a solid job, as far
as it can go. The transfer captures whatever detail is available
with strong fidelity, although some of the darker scenes bear traces
of digital break-up.

The Dolby Digital 5.1 surround track is good, but not excellent.
A good sound environment has been created, and the mix may have worked
theatrically. But the DVD sounds muffled. The front channels
are okay, but directional effects are not well-separated, and there's
an overriding tinny sound to the track.

First up is a Commentary Track with director John Hillcoat,
which is possibly more engaging than the film itself. There is
a lot of production detail here, as well as a discussion of how the
story was shaped for the film. A group of Deleted Scenes
and a short Making of the Road featurette don't add a whole
lot to the experience.


Although valiant and thoughtful in fits and starts, The Road
doesn't quite work. Unlike its source novel, the movie is capable,
but forgettable. The bleak tone will get you down, but the visuals
are gray to the point of blandness. For those who have read the
novel, the film will be an interesting tangent, while other viewers
may find the film too monotonously depressing to be of interest.
Rent it.