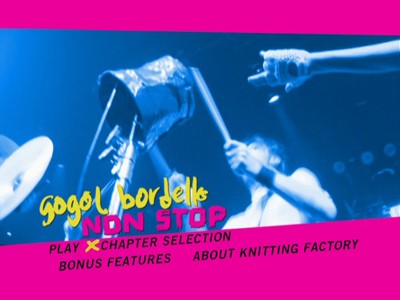 Gogol Bordello is one band that has earned the right to be dubbed an actual "experience." Their live acts are legendary parties that rage full-tilt from start to finish. The band, who call their style gypsy punk, fuse traditional European music with the incendiary energy of punk rock. They pack the stage with people, including costumed dancers, and then proceed to break the confines of that stage and carry their show out into the audience. This 2008 film, Gogol Bordello Non-Stop, tries to capture a little of that energy and deconstruct the essential elements that make Gogol Bordello what they are.

The story of Gogol Bordello is also the story of its main man, Eugene Hütz. The Ukrainian-born singer migrated to the U.S. when he was in his late teens (we see home movies of him celebrating New Year's with his family in 1988 just before moving), and his band grew out of some parties he threw at a Bulgarian bar in New York. From there, Gogol Bordello picked up new members and added to their stagecraft like a true gypsy caravan. Hütz picked players from all over the city, building his group while building a following, and by the end of the picture, the rockers are an international sensation.

Director Margarita Jimeno, who also produced, shot and edited the movie, traveled with the band from New York and all across Europe, tracking them over several years. She does her level best to give all the band members equal time, but Hütz is the undeniable presence at the front and the camera loves him. He has already been the subject of another documentary, the Ukrainian travelogue The Pied Piper of Hützovina (in which the director of the film falls for the subject as much as her camera does), and he was the most memorable element in the film adaptation of Everything is Illuminated (he played the ersatz tour guide, Alex).* In both films, Hütz proves to be a riveting screen presence, even if his act is pretty easy to get a handle on (there isn't much variation, and he's a lot like Alex from Illuminated). He is the kind of performer whose entire life is for show--and what a show it is!

The best thing about Gogol Bordello Non-Stop is that Jimeno never forgets how important the music is. Anyone walking into this documentary having never heard of Gogol Bordello before will walk out knowing exactly what kind of band they are, probably with a couple of songs stuck in their head. (An appearance on Conan O'Brien's original show performing "Start Wearing Purple" comes late in the documentary, and it's still ringing in my ears.) The band and its personality inform every frame of Non-Stop, and Jimeno is willing to follow strands of the conversation to explore the history and tradition that spawned their sound. Yes, the film does drag at times. Some segments go on too long, and others, like talking to fans, are fairly unnecessary. Just hold your breath when you start getting bored, another song is coming.

Probably the weirdest thing about Gogol Bordello Non-Stop is that, in terms of filmmaking, it's a fairly conventional band documentary. You'd maybe expect a little more for such an unconventional band. I suppose the full-on Gogol Bordello experience is one everyone is still going to have to witness live to fully get. 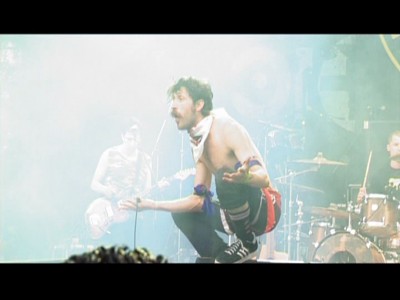 * We'll try to forget that Hütz starred in Madonna's directorial debut; once a savvy trendspotter, she is now the signal that something is over, and it'd be best if we let Eugene stay a step ahead of the harbinger of doom.

Video:
The 16:9 transfer on this region 0 disc is pretty good. The footage tends to be grainy, but that is understandable as it was shot in natural light and what appears to be a combination of video and digital. Sometimes the resolution of the DVD is a little soft and there is some interlacing, but fans should be satisfied overall.

Sound:
The stereo mix is also pretty good. Some of the source audio can be kind of low, but the filmmakers helpfully subtitle what might be hard to hear or hard to decipher due to accents. (Though, the titles themselves are often grammatically deficient. They sometimes read as if written by someone for whom English was not their first language.) The music sounds good, and the few times it's a studio recording you can hear that the soundtrack is actually quite clear when the material allows. 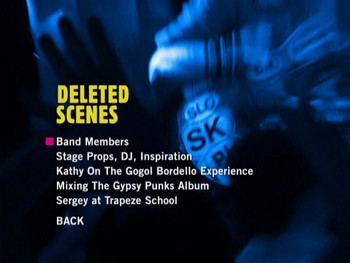 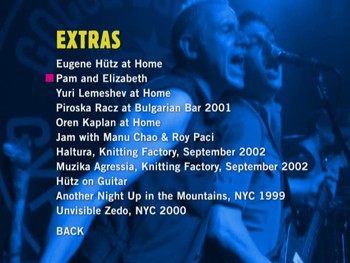 Extras:
The disc comes with a bunch of bonus scenes, including extra interview footage and added performances. These are broken into five "deleted scenes" and eleven "extras," though what the distinction is between the two sets is beyond me. The interview footage all comes out of the same pile, so why not just put both sections together? A play-all function would have also been nice.

FINAL THOUGHTS:
Highly Recommended. Gogol Bordello Non-Stop is a full-on portrait of one of the more outrageous bands on the current rock scene. Led by the wild and mustachioed Eugene Hütz, Gogol Bordello peddles their "gypsy punk" all around the world. This documentary chronicles their gain in fame and digs back into the history of the group. Full of music, candid interviews, and on-the-road antics, it's a must for any fan of the band. Those who haven't heard of them should watch it, too. This is your invitation to join the party! 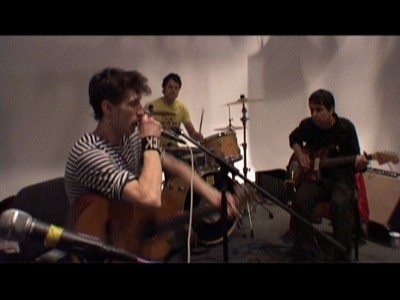