Shout Factory // G // March 16, 2010
List Price: $59.99 [Buy now and save at Amazon]
Review by Stuart Galbraith IV | posted April 10, 2010 | E-mail the Author
Let me state this right up front: The Ultimate Goldbergs is one of the best TV on DVD releases of the year, a delightful surprise. I was expecting something historically interesting but technically creaky and dramatically clunky. Boy, was I wrong.

It's one of those shows famous as a television landmark but little seen, remembered chiefly as a precursor to the more enduring I Love Lucy-type situation comedy. Partly this is because The Goldbergs had an extremely spotty, convoluted run on three different networks and, finally, in first-run syndication. It aired live for most of its existence (with scattered episodes preserved on kinescope) but then switched to 35mm film for its final season. At various times it was a half-hour weekly series and a 15-minute/twice-weekly show. Troubles with the Blacklist kept it off the air for while and it was rarely revived in any form after the late-1950s.

But now the UCLA Film & Television Archive and Shout! Factory have joined forces to release The Ultimate Goldbergs, a wonderful six-disc set featuring all 71 extant (and now restored) episodes of the 1949-56 series featuring shows from all its various incarnations, along with 12 episodes of the long-running radio series that preceded it, and other good extras including an informative booklet and an excerpt from Aviva Kempner's excellent documentary Yoo-Hoo, Mrs. Goldberg (2009); Kempner also contributes a booklet essay. 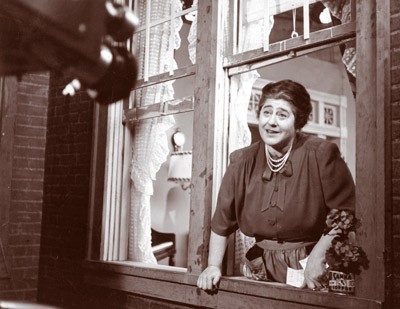 The Goldbergs are a Jewish family living in a large Bronx apartment building. At the center of things is matriarch Molly, portrayed by Gertrude Berg, also the show's creator-producer-star as well as its prolific writer. Molly is sociable, doting and almost eternally optimistic, understatedly shrewd, sensitive and nurturing. Philip Loeb was the first of several actors to play her irascible husband, Jake (more on Loeb and his successors later). Eli Mintz was comical Uncle David, from the "Old Country," a kind of Jewish John Qualen. Arlene McQuade and Larry Robinson initially played the Goldberg's teenage children, Rosie and Sammy. For most of its run, episodes would open with Molly leaning out her living room window, looking directly at the camera to welcome the audience as if one of the family.

The series is a revelation of sorts. In sharp contrast to the broad slapstick found on I Love Lucy, a series whose success greatly influenced the direction of the situation comedy for decades after, The Goldbergs has a foundation of disarming, gentle humanism.

Its main appeal is its universality and Berg's charming presence. While it might be hard to relate to a dingbat redhead and her famous Cuban bandleader husband, the Goldbergs are an archetypal 20th century immigrant family. They are explicitly Jewish New Yorkers but it doesn't matter. Catholics, Muslims, Buddhists can and did recognize their own families in these subtly-played episodes. Instead of the wild hijinks one associates with Lucy Ricardo, The Goldbergs was rooted in more everyday, believable mini-crises: the landlord wants to jack up the rent after making a few superficial renovations; resentment bubbles to the surface after a son refuses to name his newborn baby after his mother; anger when a relative misses Kol Nidre services.

Berg's warmth as Molly, a character she first created for radio in 1928, transcends all media. Beyond the immediacy of the live broadcasts, Berg's unique delivery, particularly her long monologues which sound ad-libbed in part, have an extreme authenticity that the 60 years that have passed since these programs first aired haven't dimmed. (Berg seems to have encouraged her regular supporting cast to deliver lines in the same relaxed manner, their dialogue sounds more scripted but it often overlaps, very unusual and realistic for this period.)

The result of all this - Molly talking directly into the camera, treating the audience as one of the family, Berg's realistic, relaxed characterization - is that The Goldbergs' audience adopted Molly as a kind of beloved surrogate mother and her brood as extended family. (During the 1930s and '40s in national polls Berg was frequently ranked the second-most beloved woman in America after Eleanor Roosevelt.)

It's the kind of genuine love an audience on rare occasion develops toward fictional characters over time: Laurel & Hardy; the Scarecrow, Tin Man, and Cowardly Lion in The Wizard of Oz (1939), the comic strip characters of the nearly 100-year-old Gasoline Alley; the family in Japan's Tora-san film series. These are characters one not so much watches as shares in their experiences, either through repeated viewings (as with Laurel & Hardy or The Wizard of Oz) or many episodes spread over many years (The Goldbergs, Tora-san), sometimes with the characters aging in real-time as we do.

The Goldbergs might have had the same long and profitable run on television as it had enjoyed on radio were it not for the Blacklist. Co-star Philip Loeb's leadership in the Actors Equity Association and The Goldbergs overt Jewishness (hysterical anticommunism often was laced with anti-Semitism) made him a prime target for political opportunists.

Identified as a former communist by director Elia Kazan and actor Lee J. Cobb (though Loeb denied this), the sponsor of The Goldbergs, General Foods, producer of the Sanka Coffee Berg sold from her windowsill, insisted Loeb be fired. Gertrude Berg bravely refused. She held out for months, during which time, a new show nabbed The Goldbergs coveted time-slot: I Love Lucy. By the time Berg finally conceded defeat (while keeping Loeb on salary anyway), the show's large audience had drifted away and the series never fully recovered. Harold J. Stone replaced Loeb for a short time, but he didn't work out and Robert H. Harris soon took over.

As for Loeb, his career in tatters and unable to care for a mentally disturbed son, he committed suicide in 1955. His blacklisted friends Zero Mostel and screenwriter Walter Bernstein later fictionalized Loeb's story for the Woody Allen comedy-drama The Front (1976), with Mostel essentially playing Loeb.

For its final season, Berg was unwisely persuaded to move the Goldbergs to the suburbs, which took them out of their element, away from all their colorful neighbors and made their problems seem much like those found in every other sitcom. By this point situation comedies about the working class all but disappeared save for The Honeymooners, which resembles The Goldbergs in some respects. Specifically Jewish (or ethnic generally) comedies would also vanish. Only Nat Hiken's short-lived but amusing Car 54, Where Are You? (1961-63), also set in the Bronx, would feature similar characters, at least until the Norman Lear sitcoms of the '70s.

The 24-page booklet accompanying this set includes an invaluable episode guide with plot descriptions and airdates. Spread over six, single-sided discs are seven episodes of the CBS series (1949-51); three NBC (1952-53) episodes, two fifteen-minute shows and the other a half-hour; 22 Dumont (Network) episodes; and a complete set, 39 episodes, of the syndicated version. The filmed-on-35mm syndicated shows look just fine, but I was surprised at how watchable the kinescoped episodes were, which are well above average for this sort of thing. The mono audio is likewise fine; there are no alternate audio or subtitle options, and the discs do not appear to be closed-captioned.

Also included are a dozen radio episodes, all running under 15 minutes and dating between 1939 and 1945; before and after restoration demonstrations; the aforementioned excerpt from Yoo-Hoo, Mrs. Goldberg; and an episode of Mrs. G Goes to College (1961), which had Berg, in her last sitcom, playing Molly in all but name.

This is a terrific show that holds up shockingly well considering its age and the primitive nature of early live television. It's an incredible set, unlocking a heretofore closed door to an earlier chapter of television comedy-drama, at last recognizing television's first "First Lady of Television" and a series that, were it not for the blacklist, might have begat an entire genre of realistic, humanistic comedy. A DVD Talk Collector Series title.