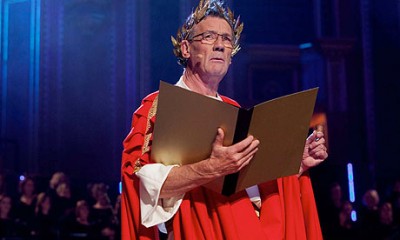 There's growing old with
grace and dignity, and then there's Not the Messiah.
Whereas four of the five surviving Pythons have found second careers
separate from their membership in one of the most influential comedy
troupes of all time, Eric Idle has persistently, and independently,
recycled the group's old material into new and less-engaging forms.
Some of Idle's ventures, such as the musical Spamalot, have
been hugely successful. Others, such as his exploitative concert
tours, in which he performs Python material solo, have been purely indulgent.

Not the Messiah, an oratorio based on Monty Python's Life of
Brian, arrives on the lower end of this spectrum, smelling as it
does like a warmed-over slab of opportunism (in this case, Python's
fortieth anniversary), even while it bears at least salutary traces
of invention.

There are times when it is
wise to rest on one's laurels. Since 1983, the Pythons have
done so in a generally elegant way, briefly revisiting their glory days
when anniversaries and such roll around. The tributes and special
events are mostly modest, however, and limited in scope. I don't
believe there have been any official Python performances, per se, since
Monty Python's The Meaning of Life was released. The book
The Pythons, a group autobiography published in 2004, may have been
the only official troupe "product" since that feature. (Aficionados
more thorough than I should feel free to correct me on this point.)

That hasn't stopped the flow
of feature films and Flying Circus on DVD, reissues of the Python
record catalog on CD, and other ancillary products such as Idle's
cannibalized projects. Not the Messiah is the latest of
all of these, and it's not the worst. Still, it's far from
the best. What keeps Not the Messiah from being a noteworthy
entry in the quasi-Python canon is its unavoidable staleness; its chief
effect will be to drive its viewers to watch Life of Brian again
- a veritable work of genius beside which this derivative "oratorio"
pales.

Co-composed with frequent Python
collaborator John Du Prez, Not the Messiah is staged with a full
orchestra and chorus, and fronted by four soloists. Songs range
from those based directly on material in Life of Brian (such
as "Mandy's Song" and "Always Look on the Bright Side of Life"),
as well as others like "O God You Are So Big," which comes from
a scene in The Meaning of Life, and the bizarre one-off "Individuals,"
in which Idle, performing solo, does a decent if perplexing Bob Dylan
impersonation. The feel of the oratorio therefore feels ad hoc
- a big jumble of jokes that Idle has compiled more out of his own
need to rehash, than out of any sense of artistic or comedic integrity.
(It's worth pointing out that Spamalot, despite its success,
relies on the same rather thoughtless approach. It includes material
from Flying Circus, plus its own version of "Always Look on
the Bright Side of Life.")

Musically, the oratorio is
a moderate success. Du Prez' orchestral arrangements are appropriately
bombastic and occasionally inspired. However, this is overshadowed
by the silly one-note joke of the libretto, which is based on the assumption
that it's hilarious to have classically-trained singers perform frivolous,
comic, and off-color material. In fact, Not the Messiah
almost uniformly fails to evoke laughter, with perhaps the solitary
exception of a very brief, well-timed appearance by Terry Gilliam.
The closing crowd-pleaser is a jaw-dropping non sequitur, with Michael
Palin appearing with a chorus of Mounties for a performance of "The
Lumberjack Song." Never has great comedy ever appeared so pathetic;
Palin's more recent career as a wonderful travel writer and documentary
presenter has been unwisely jettisoned for this stunningly inappropriate
insertion of a greatest hit. It's as if Bruce Springsteen wrote
a longform instrumental work and then ran out onstage to sing "Born
in the U.S.A."

The enhanced 1.78:1 image is fine, even though it occasionally betrays
its PAL video origins. It's a little over-sharp at times, with
compression artifacts here and there. Colors are vivid, and the
look of the hall is captured well. The photography and editing
are careful and well-coordinated, although sometimes we hear applause
that is clearly not happening live.


The surround track is adequate. The orchestra is recorded
quite well, and that aspect of the soundtrack - an important one -
is extremely pleasing, with a broad dynamic range. Everything
is very clear, as well. Post-synced applause, as mentioned already,
is periodically distracting.

A half-hour behind-the-scenes featurette is mostly self-congratulatory
and a handful of singalong songs would have worked better as
an in-feature option.

Even the most hard-core Python
aficionado will likely be disappointed by this lifeless attempt to extend
a legacy in no need of reinvigoration. From 1969 to 1983, the
Pythons produced classic, indelible comedy. Idle's need to cling
to a past that is now forty years old is mostly depressing. The
curious will want to rent it.