Other // Unrated // December 1, 2009
List Price: $19.99 [Buy now and save at Amazon]
Review by Chris Neilson | posted April 19, 2010 | E-mail the Author
With nearly 2000 yoga-related titles available on DVD, consumers are empowered to easily select a product that matches their fitness level, and complexity and style preferences. While some consumers may prefer rather no-nonsense yoga instruction from the likes of Karen Voight (e.g., Yoga Power), others favor instructors that blend new-age spiritualism, and/or eastern mysticism into their yoga instruction. Among the better known yogi in this later camp is Shiva Rea.

With more than a dozen DVD releases to date, including the best-selling title Yoga Shakti (2004), the California native and the self-described mystic, has distinguished herself as a guru of Vinyasa Flow; a yoga practice which emphasizes fluid motion synchronized with breath. Rea's latest DVD release, Daily Flow, continues this practice.

A principal feature of several of Rea's DVDs including Daily Flow is the inclusion of yoga sequences which can be undertaken individually or combined either through preset recommended practices, or user-programed combinations via the Yoga Matrix screen. The heart of the segments offered are seven roughly twenty-minute routines entitled Earth (an introductory routine utilizing primary movements), Heart-Air (twists, lunges, and back bends), Water (fluid movements), Shanti (relaxation flow), Fire & Water (arm balances, standing poses, and back bends), Fire (yogic push-ups and standing poses), and, Chakra Namaskar (a more advance routine combining the movements of the other segments). 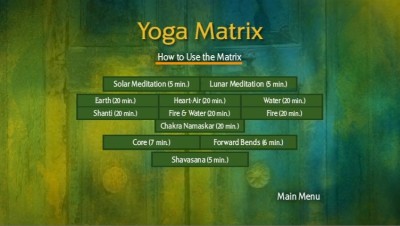 All the footage was recorded in a single production studio on an attractive, softly-lit sound stage, using both fixed and gliding cameras. The verbal instruction from Rea is provided via voiceover. While new users will prefer to hear Rea's voiceover instruction together with the mostly Indian-inspired new age music soundtrack, frequent users will enjoy the option to choose to play the optional isolated score without voiceover.

Presentation
Video & Audio:
Daily Flow is presented in enhanced widescreen (1.78:1). While the video is excellent compared to other yoga DVDs generally thanks to the rich colors and nice contrast, the image is sometimes slightly soft.

The 2.0 Dolby Digital audio is pleasant with steady audio levels and no noticeable dropouts or distortions.

Extras:
Extras include an two-minute introduction with Shiva Rea, a three-page onscreen biography of Rea, and trailers for four other yoga DVDs from Acadia.

Final Thoughts:
Daily Flow seems targeted primarily at advanced-beginner and intermediate yoga practitioners who enjoy their instruction infused with new-age spiritualism and eastern mysticism to the point that this DVD probably is not suitable for those practitioners who abhor new-age spiritualism or who are looking for extremely-challenging, advanced instruction. Absolute beginners or yoga practitioners otherwise unfamiliar with Shiva Rae and Vinyasa yoga may have some difficulty at first following Rea's verbal instruction which sometimes slightly lags her movements, but most everyone should be able to follow along well enough with a bit of practice.

For its target audience, Daily Flow is highly recommended based on the diversity and quality of its routines, the ease and versatility of the programming options, and the quality of the set, music, and DVD presentation.