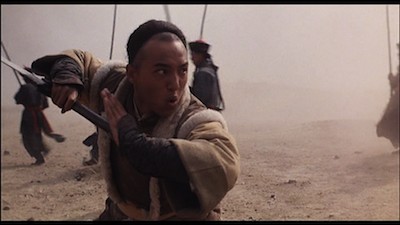 Ringo Lam's 1994 movie Burning Paradise (Huo shao hong lian si) is full of the kind of lightning-quick kung-fu action that used to be de rigueur in Hong Kong cinema. It's chockablock with quick cuts, complicated choreography, wire work, and the occasional cheesy special effect. One character has a projectile weapon that is obviously animated, though the damage it does is also gruesome and gory. Some of it may be quaint now (oh, those severed heads straight off a mannequin!), but still effective.

What makes Burning Paradise an interesting time capsule worthy of resurrection, however, is the element of dark fantasy that Lam brings to the movie. The story is set during the Ching Dynasty, and the Manchurians are persecuting Chinese martial arts schools. General Crimson (John Ching Tung), under orders of his nefarious boss Elder Kung (Wong Kam-kong), has made it his personal mission to destroy the Shaolin Temple. Most of the work is done, the Master is missing and the majority of the monks have been locked up in the Red Lotus Temple, but a few are still on the run. One of the remaining fugitives is Fong Sai Yuk (Willie Chi), whom Crimson corners out in the wilderness. The hero tries to save a prostitute (Carman Lee) who is caught in the crossfire by surrendering himself, but both of them are carted off to the Red Lotus.

There they are presented to Kung, a harsh ruler who has conquered life and death but has paid a price. He is trapped in the Temple, and so his prisoners are his entertainment. There are booby traps all over the place, and escapees who manage to get past the deadly spikes and poison gas have to face Kung's assassins. Among them is a mysterious masked woman named Boroke (Maggie Lin Quan) and a former Shaolin monk turned traitor, Hung Hei-kwun (Yang Shun). Hung is a master of the Tiger style, while Fong is skilled in the Crane. Mortal combat!

The story in Burning Paradise is both slim and conventional. All in all, it's a fairly average movie that is distinguished by its Grand Guignol sets and all the requisite blood that goes with them. Elder Kung is a pretty sick bastard, and he has a lot of corpses lying around. Ringo Lam doesn't spend too much time worrying about the narrative anyway, there is no more here than is required to get him from one stirring fight sequence to another. The battles include a lot of one-on-one beatdowns, but there are also a couple of great sections where the revolting Shaolin monks take on Kung's army. Some of the brawls naturally look a little clumsy next to the slick stylings we are used to these days, but the stunt work itself is so accomplished and the performers move so fast, it's still pretty hard not to get caught up in their agile feats. 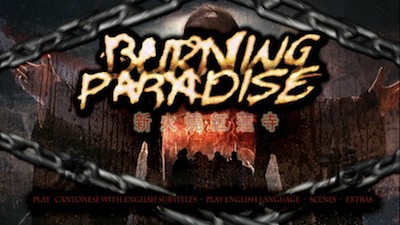 Video:
Burning Paradise is given an anamorphic transfer at a 1.85:1 ratio, and it's pretty week overall. There is a lot of macroblocking and hazy colors. Shadows and blacks are particularly poor, and there is quite a bit of print damage, including dust and debris, scratches, and colorful lines where there should be none. Given the fact that the cover looks like it was printed on a laser printer as old as the movie and the barely functional menu, one could be forgiven for thinking this was a Hong Kong graymarket release from 10 years ago.

Sound:
There are two soundtracks here, with the main one being a stereo mix of the original Cantonese audio with optional English subtitles. The mix is tin-eared and often quite distant, and there isn't much punch to the sound effects. All the sounds are put on an equal level. Still, it's a gajillion times better than the English dub, which is pretty close to unlistenable. It's like someone put all the microphones underwater and the performers are shouting into them from the shore.

The subtitles have their problems, too. The writing is okay, there are only a few typos, but the pacing is really weird. When there is a lot of talking and two lines of dialogue appear together on the screen, when the follow-up line comes up, the top piece of dialogue changes but the bottom line stays the same. This kept leading me to re-read the same line of dialogue I had already read, causing a lot of unnecessary repetition and general annoyance.

Extras:
Not many extras here. There are three trailers for other Hong Kong films and one for Burning Paradise. There is also a 4-minute, 25-second interview with Tsui Hark that looks relatively recent. He speaks in English on it, but it's subtitled in French, so it was likely recorded for either French television or a European DVD release.

FINAL THOUGHTS:
While I wouldn't say Burning Paradise is all that necessary to anyone's DVD collection, if you're in the mind for some good kung-fu with a slight twist, this would be a pretty safe bet if you Rent It. This current release leaves a lot to be desired, but take its dilapidated technology as part of the old-school charm and run with it. You'll come out the other side just fine. 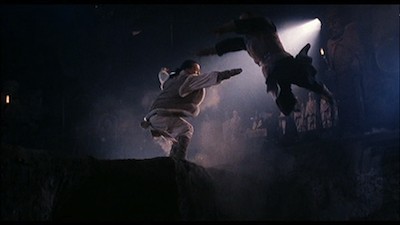