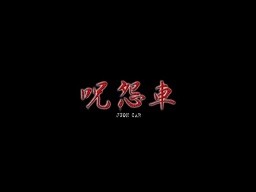 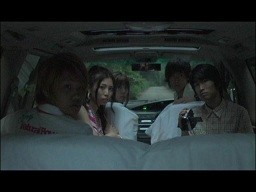 I began my last review for DVD Talk of the low budget and apparently obscure Tales of the Dead by making a to-do about its absence on the Internet Movie Database. Well, I must really be on a roll here, for Killer Car, a 2008 Japanese entry in the tortured spirit / ju-on genre, is also not recorded in the IMDB at the time that I write this, though its director, Hisaaki Nagaoka, does have a profile page listing other works in his oeuvre. Like Tales of the Dead, this omission perhaps isn't surprising, as Killer Car is clearly working from a limited budget, and likely someone will correct this oversight given its commercial home video release by distributor Cinema Epoch.

In any case, Killer Car (actually titled Ju-on Car in the opening credits sequence) follows a simple conceit. A prologue reveals that a young woman was brutally killed in the back of a van by a shadowy and disturbed assailant. (Perhaps this should have been more accurately titled Killer Van, but then, that somehow sounds even sillier than Killer Car.) Flash forward to the present, and the van now belongs to Kenji. Kenji decides to take a road trip out to the mountains with his girlfriend and three others, including his brother bound to a wheelchair (which leads to a tacky, politically incorrect joke early in the film). The quintet come upon an injured man in the woods, and Kenji and his girlfriend decide to drive him to help. Cell phones, of course, don't work, as they never do in horror films. Some of the mysterious man's dialogue self-referentially mentioning horror movies suggested to me that this set-up could have been a riff on the original Texas Chainsaw Massacre with its young characters - one in a wheelchair - travelling in a van, but it's hard to tell for sure.

Needless to say, if you're at all familiar with this genre, the van is haunted by the spectre of the murdered girl. Her soul is not at rest for her killer is amongst the cast of characters. What proceeds is fairly predictable stuff, as one by one the characters are done in by the ghost until the killer is revealed.

Despite its low budget and lack of originality, or even many convincing scares, I still found Killer Car mildly entertaining. The script, also by Hisaaki Nagaoka, contrives an interesting device that keeps the characters secluded from help, which I won't spoil here. Perhaps due to budgetary constraints, Nagaoka devises some interesting camera and staging moves that allows the ghost of the murdered girl to suddenly appear and disappear on screen. However, Killer Car's plot has a "been-there done-that" vibe, with its mixture of The Grudge and haunted vehicle fare like Christine - and cheap tricks like having the car's headlights flicker on and off when no one is supposed to be around feel juvenile in conception.

If you're a fan of these Japanese imports of this genre, I'd suggest Killer Car is worth a rental. Otherwise, check out Takashi Shimizu's Ju-on for a better primer on this type of film.

Note: While Cinema Epoch's package art claims Killer Car has a runtime of 93 minutes, it's actually only 72. I thought perhaps they're including the extras (more on these in a bit) with that figure, but that math doesn't add up either. 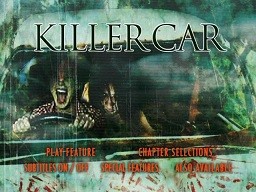 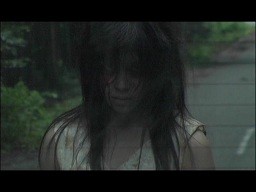 Cinema Epoch offers Killer Car in a non-anamorphic widescreen presentation. Details are lacking, and artifacts can be seen throughout.

The lone audio track is the original Japanese language track in Dolby Digital Stereo. Its quality is serviceable, with the score coming across nicely - and while I relied upon the subtitles, it didn't seem like dialogue was obscure. Speaking of the subtitles, optional English subtitles (credited to Bobby White) are available. These are fine, though occasionally the translation is awkwardly expressed, with a few dialogue lines apparently missing a verb or another word.

A Special Features menu option gives access to several extras. It has Trailers for The Roommate, Slaughter Island, Scream Girls, and Killer Car itself. Also a Still Gallery (1:49) runs through a slideshow of stills from the film's production, at the rate of one each five seconds.

More significant is a Behind the Scenes featurette (22:42) that is a rather random collection of outtakes, behind the scenes discussion and fooling around, and some individual comments from the cast and director. It's kept fairly light, and optional English subtitles are available (though not the default, so you'll have to click on your subtitles button on the remote).

Finally, a separate Also Available (4:20) menu option provides a slideshow of cover art for other Cinema Epoch titles, at the pace of one every five seconds.

Hisaaki Nagaoka's low budget 2008 Killer Car has a few isolated moments of successful scares, but its limited production values and familiar ju-on storyline keep it from being must-see viewing. Rent it, but only if you're into this horror sub-genre.